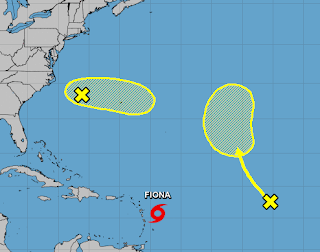 Fiona has some friends.

But E Coast one could help turn Fiona out to sea. 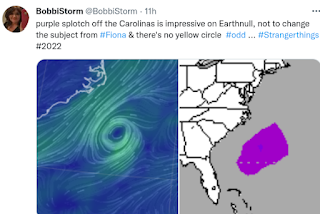 11 hours ago I asked why there was no yellow circle.

Not high chances but it is there now. 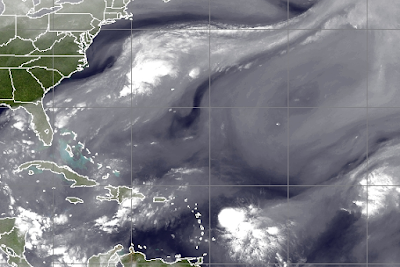 Note with the area of convection to the North….

…it juices up the atmosphere to the N of Fiona.

Keep that in mind!

Now on to Fiona… 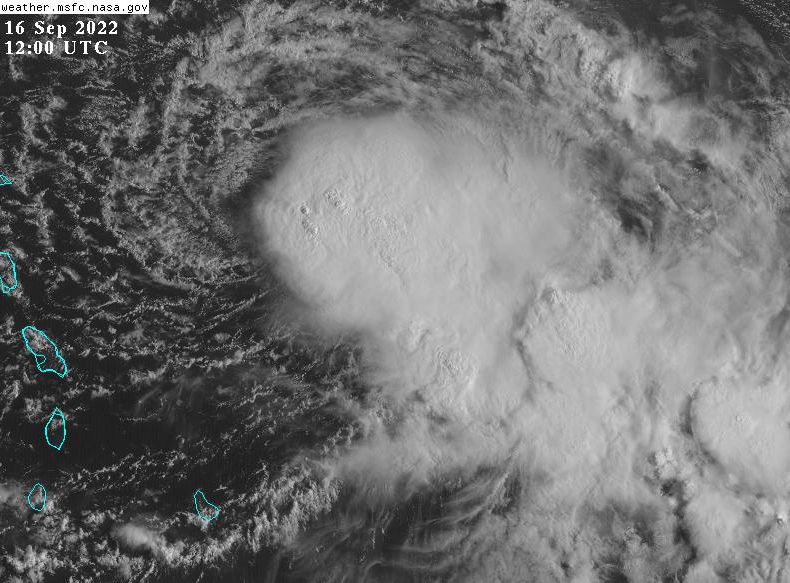 Fiona, the storm of the hour!

Naked Center to the left.

Big, bad ball of convection to the right. 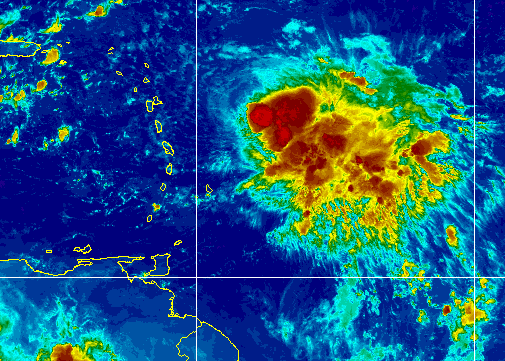 Not the most photogenic tropical storm…… 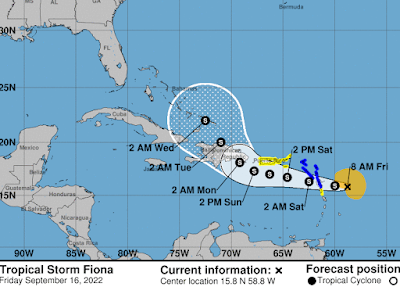 …. but lots of time to see what will really happen.

If it’s in Gitmo on the left of the Cone…

…it’s a different solution than if it’s East of the Bahamas. 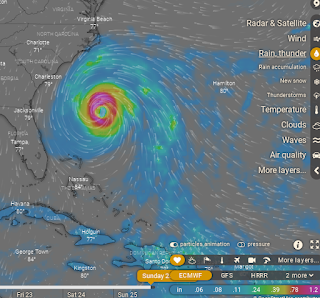 GFS has it here on Thursday.

This would be a huge SURF event…

..then veers off out to sea. 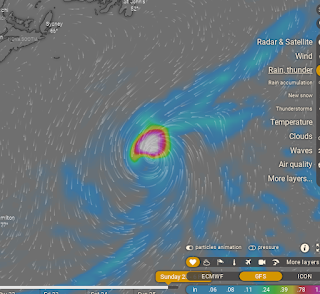 NEXT SUNDAY it’s swimming out to sea.

Time will tell. Too many variables to really talk about it but it’s Mid September and if you have not prepared a Hurricane Plan with either food and supplies to ride out a hurricane or a plan of where to go if you need to evacuate you simply are not paying attention and probably are not reading this blog.

I’ll update later today after the NEXT model run and after we get more Recon info on Fiona. Watch in real time, have a good weekend and enjoy it. There are no guarantees on what next weekend may bring. And, please remember that this is not all about the USA as our friends down in the Caribbean in PR and other beautiful places will be dealing with a stormy weekend from Fiona.

That’s a lot of Islands in the way of Fiona.

So she’s not a Fish storm but not on our menu today!

The rest of the blog is a History Lesson.

But, first let’s talk Fiona and the Models.

Fiona and the multiple possibilities. 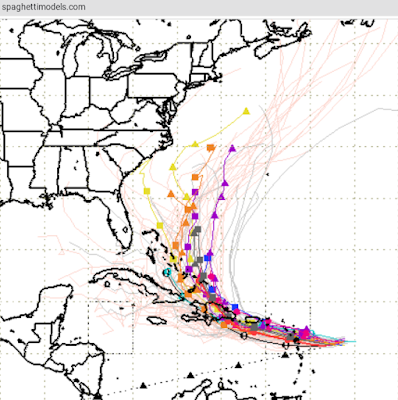 Let’s talk about the models.

This site is up on Spaghetti Models.

The colored plots are main models.

The general direction Fiona may go…

You see models shown online, on TV or whatever you use to track storms. Apps show models and online meteorologists all point to the model they feel is the best model. If you ever played “pin the tail on the donkey” as a child you will know many kids wander off in odd directions and one or two of them get close to the target and often one child will hit that target and the game is over. It’s a learning game, but to many it’s an annoying game and while some children are laughing others are wishing they were playing basketball or something normal. I mean the kid is blindfolded and they either feel empowered or terrified everyone will laugh at them. It’s an educational game as it relates to how many of us live our lives either empowered and confident or terrified someone will make fun of them so they pull into a little ball and don’t offer their suggestions or try to pin the tail on the donkey.

Tracking wanting Tropical Storms can be interesting to some and “annoying” and or a ridiculous waste of time. It’s a passion for some and others simply say “let me know when we have a Hurricane Warning” and others record, research and chase storms while many residents get in their car and sit in gridlock on a highway Northbound because they waited for a Hurricane Warning to be posted.

Fiona is so far……….the best chance of a “chase storm” for some and the best candidate for “get me out of Dodge” for others ……..that we have seen this year so far.

We watch the shaded gray lines and remember they are there while feeling semi confident it will take that turn that the other models are pointing to and we watch in real time to see what Fiona will do. The Cone shows a recurve and we wait to see in real time if something changes; some expect a change and others go about life ignoring it until there is a hurricane warning and no water left at Publix!

A weak storm will react differently than a well developed storm to the steering currents available. A weak storm goes “West” usually with the low level currents and yet often does so as a maneuver away from some large island with tall mountains or a shear filled environment and almost sneaky like bides it’s time until it can come out of stealth mode and explode into an entity some will chase and others will run away from…

Rules are made to be broken some would say.

Yes, at other times you have to admire her spunk and tenacity to stay together where other tropical waves this year would never have gone. It’s as if most of the tropical waves got the secret message that this hurricane season was NOT going to be so busy and the Atlantic in 2022 is a difficult place to develop so just don’t even bother. I’m not saying they were slacker waves, they weren’t even near the level of slacker waves, they were out right pitiful!

Fiona has been fun to watch so far as she swims with a slight shimmy that seems to work for her keeping her convection out behind her circulation that is naked and fun to watch but while it screams “Don’t bother with me nothing is happening” there is the silent message that something wicked could happen down the line!

Hispaniola is a large Island in the Caribbean that due to deforestation of the once beautiful forests is even more prone to flash floods than it was when trees were there.  Cliff notes would explain it’s a poor country and people cut down trees and sold them for money for food and other necessities. When it rains heavy from a tropical event, heavy and steady and with the elevation of the mountains, hills and ravines the water rushes down the hillsides carrying homes and people away with the tropical deluge. You do not need a Category 1 or 2 storm for this to happen. Even strong, slow moving Tropical Depressions have created tragic flash floods with a large loss of life. 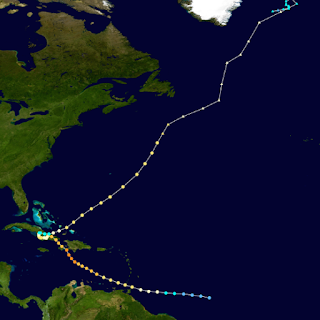 Perhaps Miss Fiona will avoid Hispaniola all together helping her stay together and sparing lives, but while we can hope for that we cannot expect that to happen. And, IF she does avoid Hispaniola she will have to cross the larger island in the Caribbean being Cuba that stands in her way of a landfall in Florida or along the Gulf of Mexico. Flora in 1963 found a way of avoiding that landfall with an odd dance move out of the Caribbean, but she did horrific damage before that move and the name has been retired. F storms are historically dangerous as historically they often showed up at the peak of the season. Flora is less remembered in America than it is in the Caribbean where according to Wikipedia over 7,000 people died before it found the Windward Passage and pulled away from further landfalls.

Another late September/October hurricane was Inez.

I point these out because they show you that hurricanes can take what seems like erratic tracks with odd turns and twists down the road. They all start out in the same basic place and approach the islands and then approach the Lesser and Greater Antilles and people in the US stare down at them sure that they are coming for their home in New Orleans, Miami or Charleston and then they take some odd track away and out to sea. But, that happens more often as we get closer to October where that one front comes to the rescue like a 1960s Western hero charging along with their favorite sidekick to save the day.

Other times fronts attract the hurricane like honey to a bee and they make a bee line for landfall and continue far inland creating floods in Canada.

Let’s look at 2 hurricanes that began with a H and aimed at the US and made memorable landfalls and kept going up into Canada …. all because there was a strong cold front that called their name. 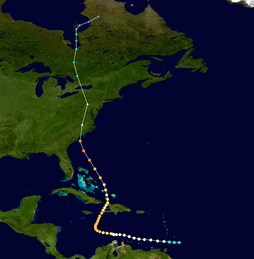 Amazing how many hit that Windward Passage.. 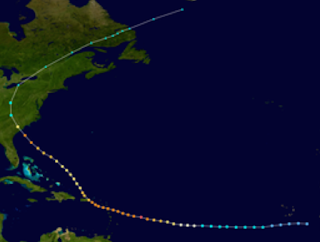 Why look at historic hurricanes? Oh, you’re probably that child that didn’t like Pin the Tail on the Donkey. It’s an educational lesson on hurricanes that were in the same general area of Fiona (not a Hurricane) that got further South into the Caribbean and found escape routes out of a Central America landfall and found a escape route taking them towards the poles and unfortunately for those who were hit by Hazel and Hugo America was in their path and fortunately for Florida Inez decided it didn’t want to do Miami and Flora decided she’d done enough damge in the Caribbean and swam off as if she was a Fish Storm.

Fiona is a weak tropical storm. She has rudimentary problems that have so far inhibited intensification into a strong hurricane. The potential is there, but so is her naked structure with her misplaced convection stubbornly moving Westbound or actually South of West moving deeper into the Caribbean than most of it’s early models. Fiona has always leaned left (West) and that is intricately tied to her weak intensity tied to her strange structure that has somehow … amazingly so… continued on against all odds keeping a strong ball of convection traveling behind her naked circulation center.

Hurricane Betsy was such a storm, yet a much earlier storm but still a storm that traveled across the Atlatnic with multiple centers not properly aligned. Betsy had a tilted center and many did not expect it to surive the journey across the Atlantic, yet alone make landfall in the United States. Like Andrew, Betsy was easy to count out due to it’s odd structure.  But………at some point……..Betsy pulled it together and despite an odd, erratic track it ended up making landfall in Florida and then Louisiana. Fiona is NOT Hurricane Betsy however it’s a good example of a weak, troubled tropical storm lumbering along with misplaced centers not properly aligned that eventually pulled it together.

Easier to write about in the rear view window of history than in real time while you are debating if Fiona will fall apart or become the hurricane to finally retire the name Fiona and add it’s name to the list of hurricanes people write about years from now when watching a weak, crappy tropical storm with models taking it to possible landfall further up the line once out of the Caribbean.

Stay tuned… Fiona is a work in progress and her ending has not been written yet, though every model on every run tries it’s best to nail down the details of the end of her story!

I wanted to write on Hurricane History a bit.