RADAR CHECK: Again today we have scattered to numerous showers and thunderstorms across Alabama. Flash flood warnings remain in effect for the Montgomery area at mid-afternoon… flash flood warnings were also required for parts of Mobile and Baldwin counties earlier this morning.

Showers are most active over the southern 2/3 of the state, and some will persist into the late night hours. The sky is mostly cloudy, and temperatures are in the 76-83 degree range in most places. 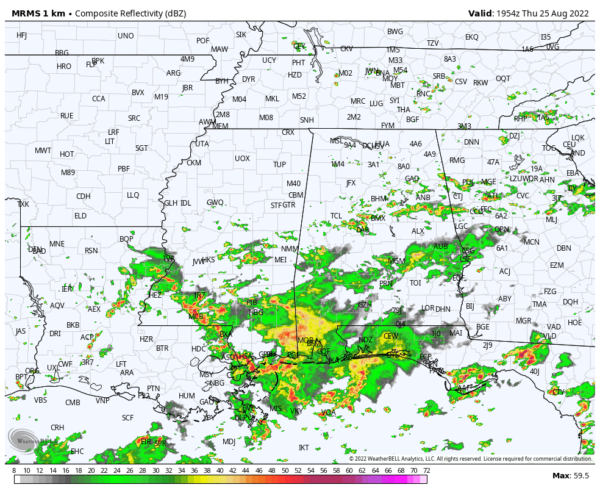 Don’t expect much change tomorrow; the sky will be mostly cloudy with a number of showers and thunderstorms around during the day. It won’t rain everywhere, and it won’t rain all day, but any one spot will see a 60-70 percent chance of getting wet during the day. The high will be in the low 80s.

THE ALABAMA WEEKEND: Showers and storms will still be around over the weekend, but they should be a little more scattered in nature. Odds of any one place seeing rain both days will be in the 30-40 percent range… the sun will be out at times and afternoon temperatures will reach the mid to upper 80s. Most, but not all of the showers will come from around noon to midnight. No way of knowing in advance exactly when and where they form… if you have an outdoor event planned you will just have to watch radar trends.

NEXT WEEK: There will be some risk of showers and thunderstorms on a daily basis through the week… there will be intervals of sun along the way, and highs will stay under 90 degrees in most spots. Most of the showers and storms will come during the afternoon and evening hours. There is no skill in a specific forecast for the Labor Day weekend this far in advance… but at the moment we are not seeing any signal for any major, high impact event for Alabama or the central Gulf Coast. See the daily Weather Briefing video for maps, graphics, and more details. 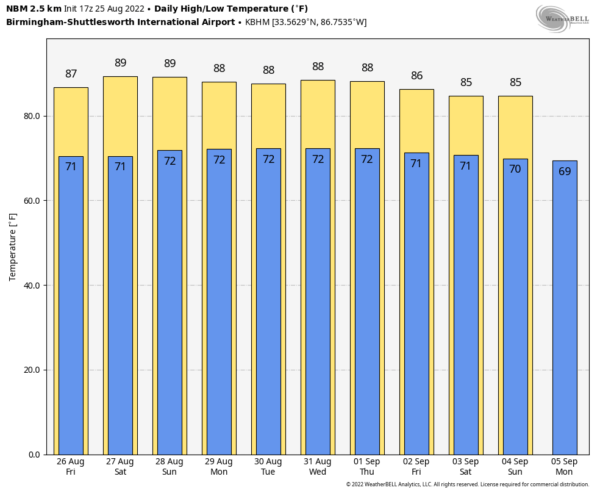 TROPICS: NHC continues to monitor two tropical waves this afternoon. One is a trough of low pressure located near the Windward Islands, and is producing disorganized shower and thunderstorm activity. This system is expected to move westward at about 15 mph during the next several days, and environmental conditions could become more conducive for slow development when it moves across the central and western Caribbean Sea early next week.

The other wave is located between the west coast of Africa and the Cabo Verde Islands, and is producing a large area of disorganized showers and thunderstorms. Environmental conditions could support some slow development of this system through early next week while it moves westward across the eastern and central tropical Atlantic at 15 to 20 mph.

NHC gives both waves only a 20 percent chance of development over the next five days, and the rest of the Atlantic basin remains very quiet. 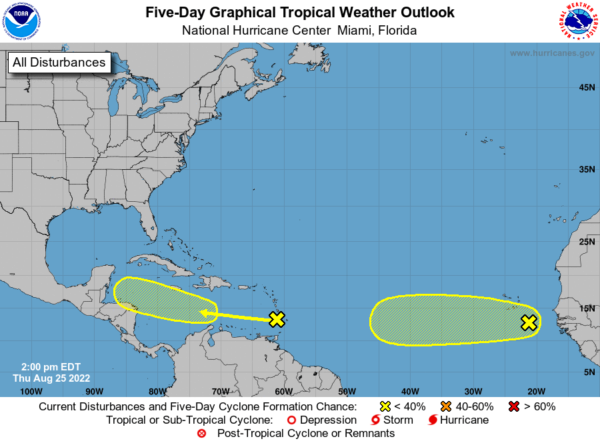 FOOTBALL WEATHER: For the high school games tomorrow night, a few scattered showers will be around, mostly during the first half of the games. It won’t rain at every stadium, but I would take the rain gear. Temperatures will be near 80 at kickoff, falling into the upper 70s during the second half.

Saturday, Jacksonville State will take on Stephen F. Austin at Cramton Bowl in Montgomery (2:30p CT kickoff on ESPN)… the sky will be partly sunny with some risk of a passing shower or storm during the game. Kickoff temperature near 87, falling back into the low 80s by the final whistle.

ON THIS DATE IN 1814: A strong tornado moved through Washington D.C. The severe storm arrived the day after the British Troops had set fire to the Capitol, the White House, and other public buildings. The storm’s rains would douse those flames. The tornado did major structural damage to the residential section of the city. The tornado’s flying debris killed more British soldiers than by the guns of the American resistance. The storm blew off roofs and carried them high up into the air, knocked down chimneys and fences and damaged numerous homes. Some homes were destroyed. It lifted two pieces of cannon and deposited them several yards away. At least 30 Americans were killed or injured in the heavily damaged buildings, and an unknown number of British killed and wounded.

ON THIS DATE IN 2017: Hurricane Harvey made landfall along the Middle Texas Coast at category four strength. It caused catastrophic flooding and more than 100 deaths. It is tied with 2005’s Hurricane Katrina as the costliest tropical cyclone on record, inflicting $125 billion in damage, primarily from severe rainfall-triggered flooding in the Houston metropolitan area and Southeast Texas. With peak accumulations of 60.58 in in Nederland, Texas, Harvey was the wettest tropical cyclone on record in the United States. The resulting floods inundated hundreds of thousands of homes, which displaced more than 30,000 people and prompted more than 17,000 rescues.