MARVELOUS MARCH AFTERNOON: The sky is partly to mostly sunny across Alabama this afternoon with temperatures mostly in the low 70s. Clouds will in increase tonight, however, ahead of an approaching storm system.

A band of showers will move into Alabama during the day tomorrow, and the risk of rain will continue tomorrow night. Some thunder is possible, but with very little surface based instability severe thunderstorms are not expected. A surface front will hang up northwest of Alabama Wednesday, so occasional showers remain possible. Then, a dynamic upper air system will bring the chance of strong to severe thunderstorms to much of Alabama Thursday afternoon and Thursday night. SPC has much of the state in a severe weather risk in their “Day 4” severe weather outlook. 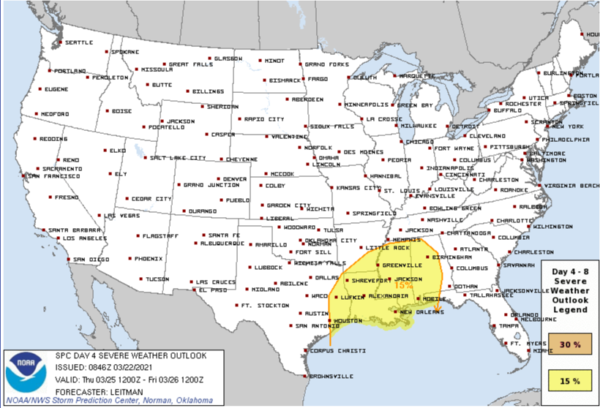 We continue to see some differences in the global models this afternoon, so it is still a little early to define the magnitude of the severe weather threat, and the specific timing. For now it looks like the main window for heavier thunderstorms Thursday will come from noon to midnight, but this could easily change. Once we get within 60 hours of the event we are within range of the high resolution, convection allowing models for a much better look.

FLASH FLOOD WATCH FOR SOUTHWEST ALABAMA: NWS Mobile has issued a flash flood watch for Mobile, Baldwin, Washington, Clarke, and Choctaw counties, where rain amounts could exceed four inches between now and Thursday night. Rain totals for the northern half of the state for the same time frame will be in the 2-4 inch range.

FRIDAY AND THE WEEKEND: A slot of dry air will work into Alabama Friday; the sky becomes partly sunny with a high in the mid 70s. But, the dry weather won’t last long as clouds will increase Friday night and periods of rain are likely Saturday and Sunday ahead of the next upper air wave. Thunderstorms could be involved over the weekend, but for now severe storms look unlikely. Rain for most of Alabama will be in the 3-5 inch range between tomorrow and Sunday night. 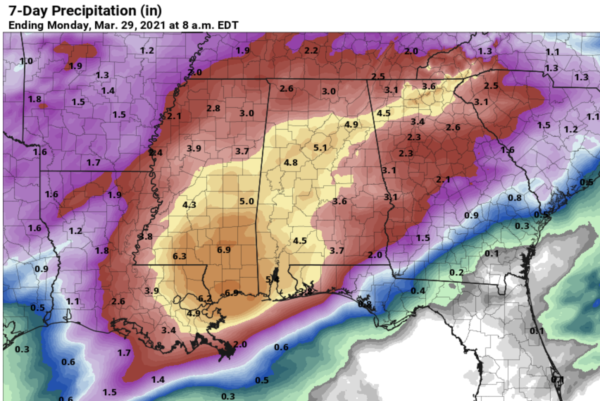 NEXT WEEK: Drier air returns Monday, and for now much of the week looks rain-free with highs mostly in the 70s. See the Weather Xtreme video for maps, graphics, and more details. 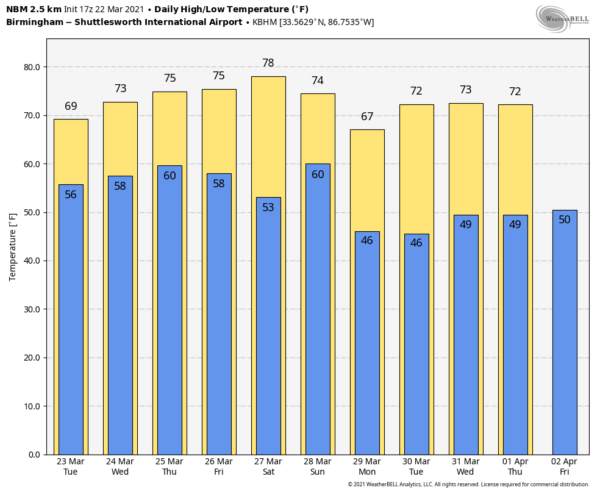 LAST WEDNESDAY’S TORNADO COUNT: The NWS Birmingham has confirmed the 21st tornado in their forecast area for the March 17 event, the 25th tornado in Alabama. It was a brief EF0 tornado along Highway 231 in southeast Montgomery County which occurred at 10:43PM that evening.

ON THIS DATE IN 1920: A spectacular display of the “Northern Lights” was visible as far south as Bradenton FL, El Paso, TX and Fresno, CA. At Detroit MI, the display was described “so brilliant as to blot out all-stars below the first magnitude.”

ON THIS DATE IN 1952: A tornado moved through parts of Morgan and Madison counties in North Alabama, killing four people. Many buildings at Redstone Arsenal sustained damage.

Look for the next Weather Xtreme video here by 6:00 a.m. tomorrow….