Today will be a typical summer day in Central Alabama as we’ll be hot with a chance of isolated to scattered afternoon showers and storms. The better rain chances will be over the southeastern part of the area. Afternoon highs will top out in the upper 80s to the mid 90s.

Sunday looks to be a dryer day as far as rain chances are concerned. A few isolated showers and storms are possible during the afternoon hours, but overall chances are rather slim. Highs will be in the lower to mid 90s.

On Monday, a trough will begin to move from the Mississippi Valley towards the Great Lakes region, and that will bring an increase of rain chances for the northern half of the area. Scattered to numerous showers and storms will be possible throughout the day and overnight hours, especially along and north of the I-20 corridor. Highs will range from the upper 80s to the mid 90s.

The better rain chances move to the eastern half of the area on Tuesday as the trough continues to move farther away. The western half will continue to see a small chance of a few isolated to scattered showers and storms. Highs in the upper 80s to the mid 90s.

Humidity levels will be higher on Wednesday, and so will temperatures as the heat that has been bottled-up out west moves farther eastward. We’ll have a very small chance of a few isolated afternoon showers and storms, but most will have partly to mostly sunny skies. Highs throughout the 90s.

Not much change for Thursday as far as the heat, but models are showing a front trying to move through the area that will bring a decent chance of scattered afternoon storms to the area. Highs will be in the lower to mid 90s.

And at the end of the forecast period on Friday, the front makes it to the southern parts of the area, which will keep a decent chance for scattered showers and storms in the forecast. Highs in the lower to mid 90s. 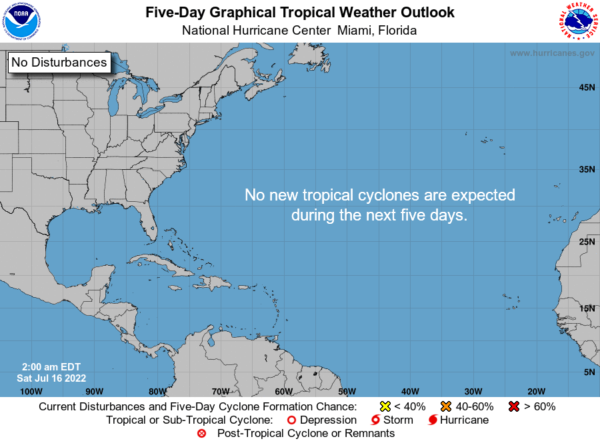 All is calm across the Gulf of Mexico, the Caribbean Sea, and the tropical Atlantic Ocean, and no new tropical systems are expected to form over the next five days.