THIS WEEKEND: We have a stalled front to our south over the Gulf Coast this morning, along with another stalled front off to our north. We also have high pressure close by that will keep our rain chances very small across Central Alabama today. Skies will be mostly sunny, with only a few isolated showers and storms. Highs in the upper 80s to the lower 90s.

Rain chances will be a little higher across the area on Sunday as we’ll have more of a southerly flow across the area. Skies will be mostly sunny, with a few scattered showers and storms forming during the afternoon hours. Highs in the upper 80s to the lower 90s.

NEXT WEEK: Moisture levels will continue to be higher across the area on Monday, which will allow for more scattered to numerous shower and thunderstorm coverage throughout the afternoon and early evening. Highs will be in the upper 80s to the lower 90s.

Same story on Tuesday, hot and humid with scattered afternoon and evening showers and storms. Highs in the mid 80s to the lower 90s.

A cold front will swing into the area on Wednesday that will start to dry out the air north of it, while scattered showers and storms will occur out ahead of it. Highs in the upper 80s to the lower 90s.

The front will be to our south on Thursday, and we’ll have slightly cooler temperatures and drier air across Central Alabama. Only a few isolated afternoon showers will be possible. Highs in the mid to upper 80s.

And at the end of the forecast period on Friday… We’ll continue with the drier air over the area, which will keep us with only a small chance of a few isolated afternoon showers. Highs in the mid to upper 80s. 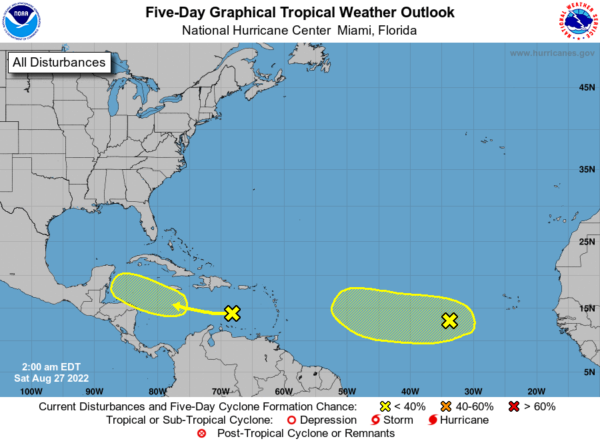 THE TROPICS: We have a trough of low pressure over the eastern Caribbean Sea moving to the west that will potentially move into an environment that would allow for some slow development. It has a low chance of becoming a tropical depression over the next five days.

We also have a tropical wave moving across the eastern tropical Atlantic Ocean that will also have the potential for some slow development over the next five days, but it also has a low chance of becoming a tropical depression during that time.