How we got here…

Before we dig into the forecast, a quick recap of June. Everything was going along just dandy for the first 10 days or so of the month – near average temperatures and a few rainmakers. Then, the midsummer heat dome developed… and basically never left. The month ended as the 7th warmest on record with SIX days that reached 100 degrees (second most on record). Rain chances also dropped off under unrelenting high pressure and the month ended as the 10th driest on record with less than an inch of rain officially recorded.

June was highlighted by oppressive heat and lack of appreciable rainfall across the Mid-South. Just how hot and dry was it? Here’s a look at some statistics from our four official climate stations and the latest drought update. #tnwx #arwx #mswx #mowx pic.twitter.com/UKPcyYAVgT

As we ended turned the calendar from June to July, upper level high pressure eased just a bit and some were lucky enough to get some much-needed precipitation from scattered thunderstorms. But many were not. And as he head into the Independence Day holiday, the weather is shaping up to be much like you would expect – hot and humid with a very small rain chance – as the heat dome rebuilds for the week ahead.

An upper level disturbance (the faint remnants of a tropical low that deluged parts of the upper TX coast late last week), is weakening over Arkansas and rain chances are dwindling with it today. That sets the stage for high pressure aloft to rebuild heading into the holiday and week ahead. Temperatures have remained hot the past few days, but with the disturbance less of a factor, there won’t be a lot of cloud cover to shield the sun’s rays and we’ll easily be back in the mid 90s for July 4th. In addition, humidity has started to return as dewpoints climb into the low to mid 70s, resulting in heat indices that climb back to near the danger level of 105 degrees. A Heat Advisory has been issued for Monday. Only a very small chance of a shower exists in the afternoon, but Independence Day celebrations in the evening should be unaffected and the weather will feel uncomfortably like July. 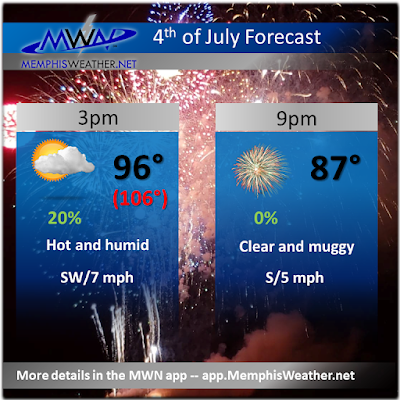 Heading into the week, as high pressure at the surface and aloft dominate, looks for continued heat and humidity with almost no chance of rain. Highs soar to near 100 by Wednesday and stay there through the end of the week, while overnight lows only drop below 80 outside of the city, and even there just barely. It’s a persistence forecast through Friday unfortunately, so expect Heat Advisories, and possibly Warnings, to continue throughout the week.. Next weekend, there are signs of an approaching cold front, though I’m not sure (and the models aren’t either) that it’ll actually make it here. What it should do is increase rain chances a bit for Saturday, though highs remain in the upper half of the 90s all weekend it appears.

It looks like summer is here to stay, and it won’t be kind for the foreseeable future! Please ensure that you are practicing good heat safety, drinking plenty of water, staying cool in the hottest part of the day, and checking on those that need your assistance – the young, old, and your pets. The longer the heat lasts, the more likely it is to succumb to heat exhaustion or heat stroke if proper precautions are not taken. 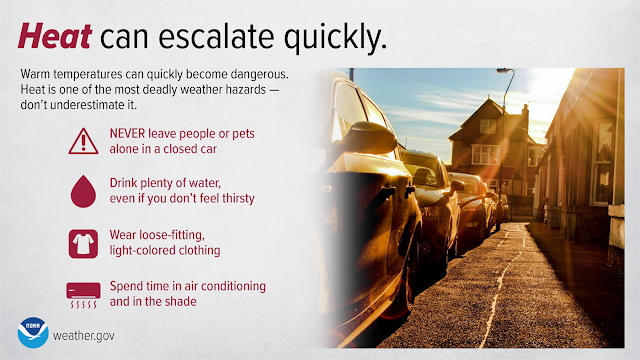