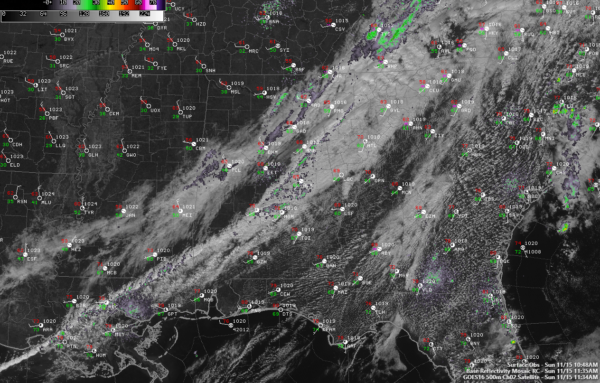 There are two distinct bands of clouds across Alabama late this morning: the first associated with the front that now lies across South Central Alabama generally from Randolph, Tallapoosa, and Chambers Counties in the east, southeastward into the Montgomery area then into Southwest Alabama.

The post-frontal band is approaching I-59. and is about 50 miles wide.

There is some clearing in between the two bands, and Northwest Alabama is mostly sunny now, including places like Hamilton, DOuble Springs, Moulton, and the Shoals.

Temperatures are now mostly in the 60s as sunshine warms the cooler air behind the front.

There are some sprinkles now from parts of Lamar and Tuscaloosa Counties, as well as from northeastern Jefferson County up I-59 into Etowah, Jackson, and DeKalb Counties. A few heavier showers are approaching Huntsville.

There are still some moderate showers near the from over East Alabama and in the Montgomery area.

Temperatures will remain in the 60s until mid-afternoon when they will quickly start falling back into the 50s. Lows tonight will be in the 30s pretty much area-wide, with lower 40s limited to South Central se3ctions. Frost will b possible over North Alabama.

Tomorrow will be seasonally sunny and cool, with highs in the lower and middle 60s. The rest of the week will be dry and seasonal as well.