A disturbance is approaching from the west and will cause snow to develop from about 8 am in East Central PA and 1 pm on Eastern Long Island and in Fairfield County, CT. Some rain will be possible in Central NJ, especially near the coast. There could also be some sleet and freezing rain. Highs today will range from the upper 20’s in far Northeastern PA and far Northwestern Orange County, NY, to the low 40’s along the NJ Coast.

Tomorrow light snow will end between about 3 am in East Central PA and 12 pm in Fairfield County, CT and on Eastern Long Island. Highs will be in the 30’s.

Below is the latest snowfall map from the short-range American model, courtesy WeatherBell Analytics. Click on the image to enlarge. 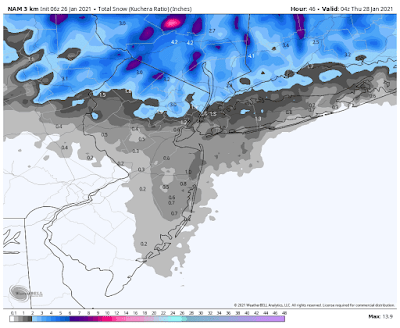 Below is the latest snowfall map from the European Ensemble mean (an average of the European model run 50 different ways for various conditions), courtesy WeatherBell Analytics. Click on the image to enlarge. 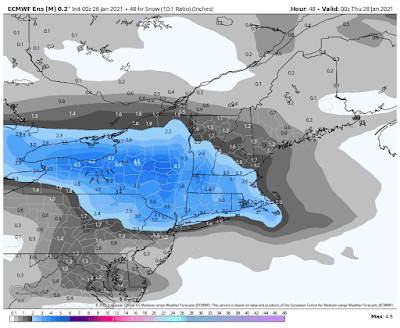 And below is the latest snowfall map from the operational run of the European model, courtesy WeatherBell Analytics. Click on the image to enlarge. 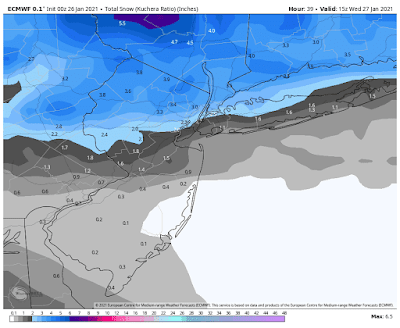 Saturday will be mostly sunny and then Sunday clouds will increase as a strong disturbance approaches from the west. Highs will range from the mid teens in Northeastern PA to the mid 20’s in Central NJ Saturday and will be in the upper 20’s and low 30’s Sunday.

Monday there will be a chance of snow as the approaching disturbance may develop into a Nor’easter along the Middle Atlantic Coast. Highs will be in the upper 20’s to mid 30’s.

Next Friday, February 5th, there will be a chance of rain showers as a cold front approaches from the west. Highs will be in the 40’s.

Next Saturday, February 6th, there will be a chance of rain showers ending in the morning as a cold front passes through our area. Highs will be in the mid 30’s to mid 40’s.