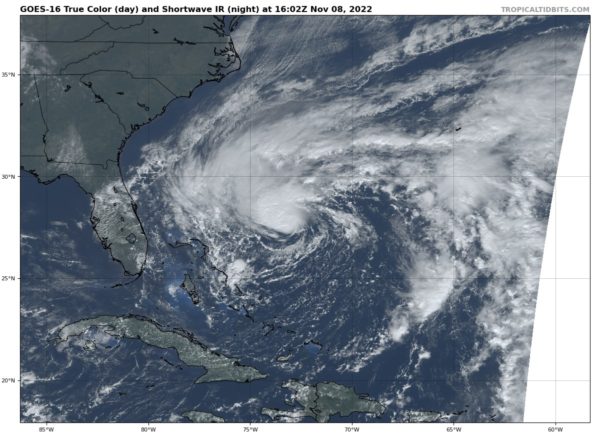 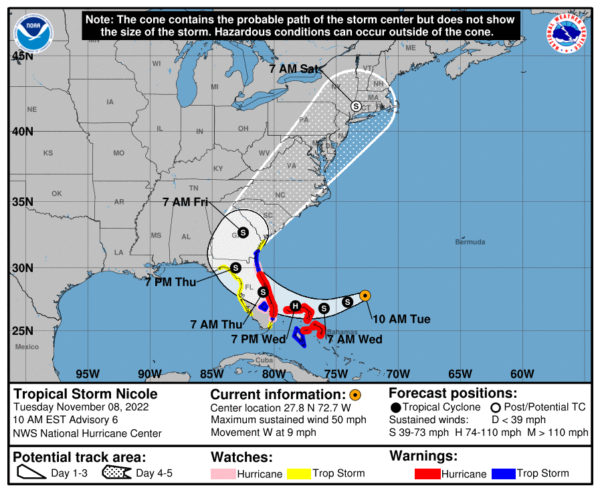 KEY MESSAGES
————-
1. Hurricane conditions and a dangerous storm surge are expected in portions of the northwestern Bahamas on Wednesday, where a Hurricane Warning is in effect. 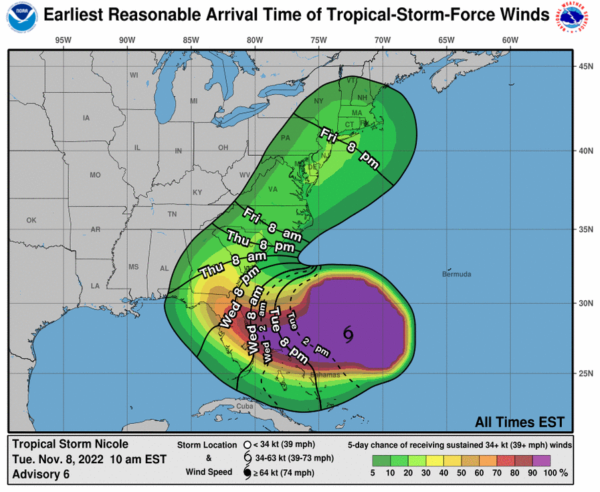 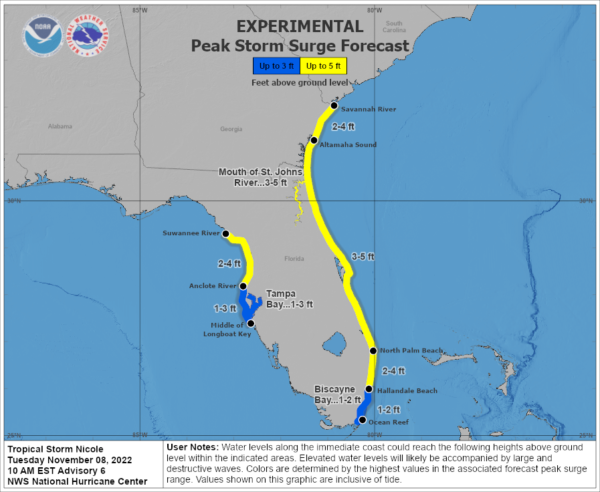 3. A dangerous storm surge is expected along much of the east coast of Florida and portions of coastal Georgia where a Storm Surge Warning is in effect. The storm surge will be accompanied by large and damaging waves. Residents in the warning area should listen to advice given by local officials.

4. Do not focus on the exact track of Nicole since it is expected to be a large storm with hazards extending well to the north of the center, outside of the forecast cone. These hazards are likely to affect much of the Florida peninsula and portions of the southeast United States.

5. Nicole will produce heavy rainfall Wednesday and Thursday across the Florida Peninsula. Flash and urban flooding will be likely with possible river rises on the St. Johns River. Flash, urban and small stream flooding will be possible in Southeast Georgia and portions of South Carolina Thursday into Thursday night.

DISCUSSION
———–
Deep convection has developed and persisted near the center of Nicole this morning and while there are still some characteristics of a subtropical cyclone, the smaller radius of maximum winds and improving inner-core convection suggest it has made the transition to a tropical cyclone. A NOAA reconnaissance aircraft has reported that the pressure has fallen to around 992 mb, and has found 700-mb flight-level winds of 54 kt and believable SFMR winds of 40-42 kt. Based on those data, the initial intensity was raised to 45 kt at 1200 UTC, and is kept there for this advisory.

The anticipated westward turn appears to have occurred, and the initial motion estimate is 280/8 kt. A strong deep-layer ridge over the southeastern United States is expected to steer the storm westward to west-southwestward during the next 24 to 36 hours. This motion will bring the center of Nicole near the northwest Bahamas on Wednesday. After that time, the ridge is forecast to shift eastward allowing Nicole to turn west-northwestward to northwestward, as it approaches the east coast of Florida. By 72 hours, Nicole is forecast to recurve over the southeastern United States ahead of a mid-latitude trough. Although there is good agreement on this overall scenario, there is some increased spread in the track guidance on exactly when Nicole makes the west-northwestward turn near the east coast of Florida. The typically reliable GFS and ECMWF models are along the southern side of the guidance envelope, while the regional hurricane models (HWRF and HMON) are on the northern side. Since the storm is likely near the apex of its most northern point, it is worth noting the model trackers are noticeable north of the raw model fields. In fact, the GFS tracker is about 45-50 n mi north of its raw fields. The NHC track is very close to the previous forecast, which is along the southern side of dynamical model trackers and is closest to the GFS ensemble mean. Until the guidance stabilizes, it is prudent not to make any significant changes.

Nicole will be traversing relatively warm SSTs of 27-28 degrees Celsius and upper-level conditions that are expected to allow for steady strengthening during the approach to the northwestern Bahamas and the east coast of Florida. The NHC forecast calls for Nicole to become a hurricane when it is near the northwest Bahamas and remain a hurricane when it reaches Florida. The NHC intensity forecast is close to the various intensity consensus aids. Weakening is expected after Nicole moves inland over Florida and while it accelerates northeastward over the southeastern United States. Although the system could still produce tropical-storm-force winds over the adjacent offshore waters. Nicole should be extratropical by late Friday, and most of the global models show the circulation dissipating between days 4 and 5.