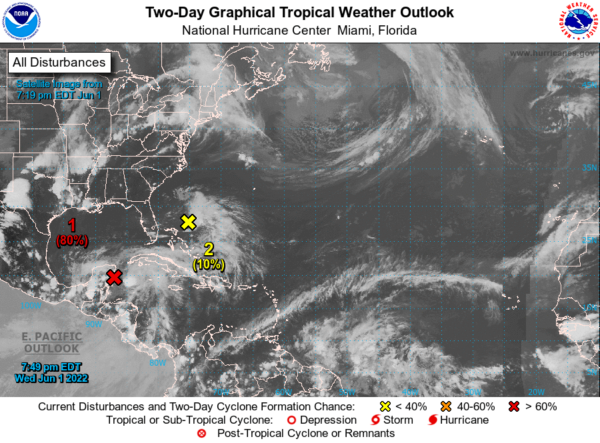 Not much change in the forecast between the update at 1 pm CDT this afternoon and tonight’s 7 pm CDT update. However, the NHC has upped the formation chances up to 80% through the next 48 hours on the remnants of Agatha. Therefore, a tropical depression is likely to form by Friday or earlier. Here is the latest update from the NHC: 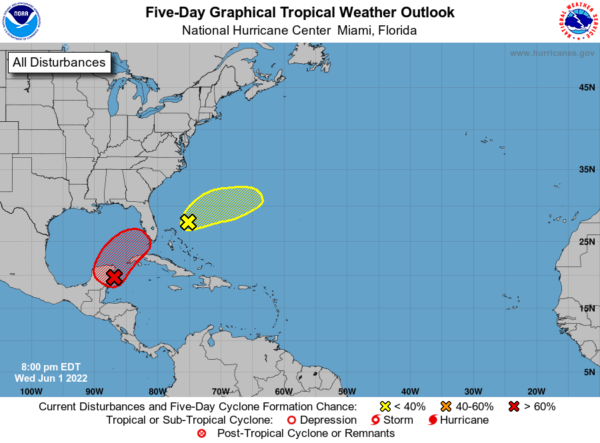 • Near the Yucatán Peninsula and Southeastern Gulf of Mexico:

A broad area of low pressure located near the east coast of the Yucatán Peninsula is producing a large area of disorganized showers and thunderstorms over the northwestern Caribbean Sea and Yucatán Peninsula. Despite strong upper-level winds, gradual development is forecast, and this system is likely to become a tropical depression while it moves slowly northeastward over the northwestern Caribbean Sea and southeastern Gulf of Mexico during the next day or two. Regardless of development, locally heavy rainfall is likely across portions of the Yucatán Peninsula during the next day or so, spreading across western Cuba, South Florida, and the Florida Keys on Friday and Saturday. Interests in the Yucatán Peninsula, western Cuba, the Florida Keys, and the Florida Peninsula should monitor the progress of this system.

• Southwestern Atlantic, northeast of the Bahamas:

A weak surface trough located about 150 miles northeast of the northwest Bahamas is producing disorganized showers and a few thunderstorms. While surface pressures have lowered somewhat over the past day or so, environmental conditions appear only marginally favorable, and significant development of this system appears unlikely as it moves generally east-northeastward over the next several days away from the southeastern United States.