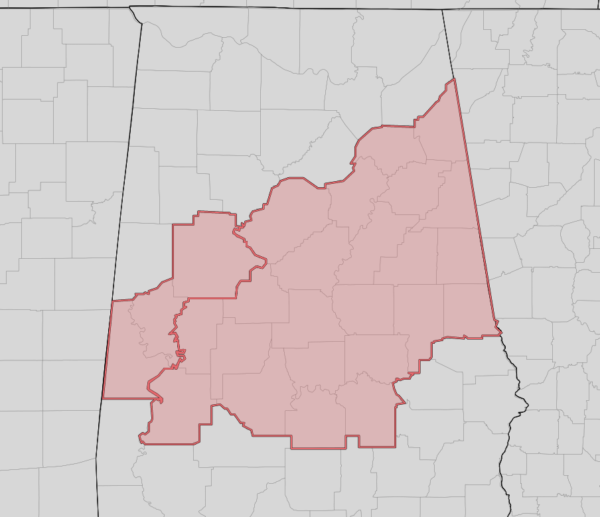 A Tropical Storm Watch means that tropical-storm-force winds are possible somewhere within this area within the next 48 hours. As for the main window of timing, it will be from Wednesday evening through Thursday morning.

OVERVIEW: Tropical Storm Zeta was located just offshore of the northern coast of the Yucatan Peninsula and is expected to continue moving into the southern Gulf of Mexico tonight. Zeta will re-strengthen into a hurricane tonight. Zeta is expected to make landfall along the northern Gulf Coast by Wednesday evening and move quickly across Central Alabama Wednesday night. A swath of 30 to 40 MPH wind is expected to occur along and to the right of Zeta’s track, roughly south of Interstate 59, with gusts of 40 to 55 MPH possible. Rainfall amounts of 2 to 4 inches are expected with locally higher amounts, which may cause localized flash flooding. There is also a low threat of a brief tornado Wednesday night across southern and southeastern portions of Central Alabama.

WIND: Prepare for dangerous wind having possible significant impacts across Central Alabama. Potential impacts in this area include:

• Some damage to roofing and siding materials, along with damage to porches, awnings, carports, and sheds. A few buildings experiencing window, door, and garage door failures. Mobile homes damaged, especially if unanchored. Unsecured lightweight objects become dangerous projectiles.
• Several large trees snapped or uprooted, but with greater numbers in places where trees are shallow-rooted. Several fences and roadway signs blown over.
• Some roads impassable from large debris, and more within urban or heavily wooded places. A few bridges, causeways, and access routes impassable.
• Scattered power and communications outages, but more prevalent in areas with above-ground lines.

TORNADOES: Prepare for a tornado event having possible limited impacts across South-Central Alabama. Potential impacts include:

• The occurrence of isolated tornadoes can hinder the execution of emergency plans during tropical events.
• A few places may experience tornado damage, along with power and communications disruptions.
• Locations could realize roofs peeled off buildings, chimneys toppled, mobile homes pushed off foundations or overturned, large tree tops and branches snapped off, shallow-rooted trees knocked over, moving vehicles blown off roads, and boats pulled from moorings.