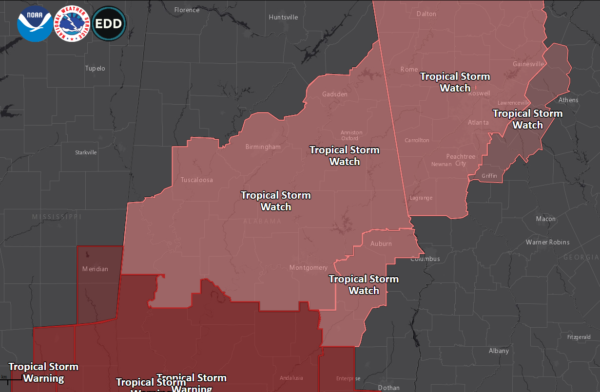 * CHANGES TO WATCHES AND WARNINGS:
– A Tropical Storm Watch has been issued for Bullock, Lee, Macon,
and Pike

Zeta has re-strengthened into a hurricane over the Gulf this morning. Zeta
is expected to make landfall along the northern Gulf Coast later today
and move quickly across Central Alabama tonight. A swath of 40 to 60
mph wind gusts is expected to occur along and to the right of Zeta`s
track, roughly south of Interstate 59. Additional rainfall amounts of
2 to 3 inches are expected with locally higher amounts, which may
cause localized flash flooding. There is also a low threat of a brief
tornado tonight across southern and southeastern portions of Central
Alabama. 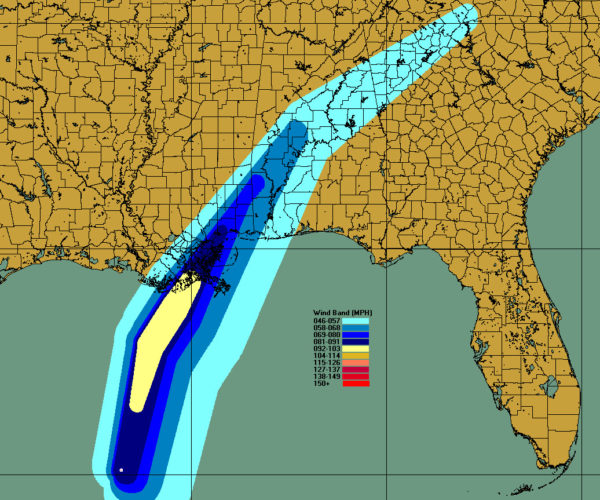 * WIND:
Prepare for dangerous wind having possible significant impacts across
Central Alabama. Potential impacts in this area include:
– Some damage to roofing and siding materials, along with damage
to porches, awnings, carports, and sheds. A few buildings
experiencing window, door, and garage door failures. Mobile
homes damaged, especially if unanchored. Unsecured lightweight
objects become dangerous projectiles.
– Several large trees snapped or uprooted, but with greater
numbers in places where trees are shallow rooted. Several
fences and roadway signs blown over.
– Some roads impassable from large debris, and more within urban
or heavily wooded places. A few bridges, causeways, and access
routes impassable.
– Scattered power and communications outages, but more prevalent
in areas with above ground lines.

* TORNADOES:
Prepare for a tornado event having possible limited impacts across
southern portions of Central Alabama. Potential impacts include:
– The occurrence of isolated tornadoes can hinder the execution
of emergency plans during tropical events.
– A few places may experience tornado damage, along with power
and communications disruptions.
– Locations could realize roofs peeled off buildings, chimneys
toppled, mobile homes pushed off foundations or overturned,
large tree tops and branches snapped off, shallow-rooted trees
knocked over, moving vehicles blown off roads, and boats pulled
from moorings.

Elsewhere across Central Alabama, little to no impact is anticipated.

Now is the time to check your emergency plan and emergency supplies
kit and take necessary actions to protect your family and secure your
home or business.

When making safety and preparedness decisions, do not focus on the
exact forecast track since hazards such as flooding rain, damaging
wind gusts, storm surge, and tornadoes extend well away from the
center of the storm.

If in a place that is vulnerable to high wind, such as near large
trees, a manufactured home, upper floors of a high-rise building, or
on a boat, plan to move to safe shelter.

If you live in a place particularly vulnerable to flooding, such as
in a low-lying or poor drainage area, in a valley, or near an already
swollen river, plan to move to safe shelter on higher ground.

There is a threat from tornadoes with this storm. Have multiple ways
to receive Tornado Warnings. Be ready to shelter quickly.

The next local statement will be issued by the National Weather
Service in Birmingham AL around 10 AM CDT, or sooner if conditions
warrant.