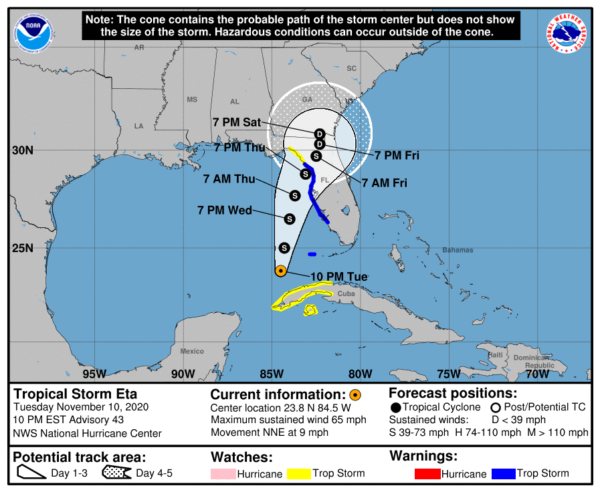 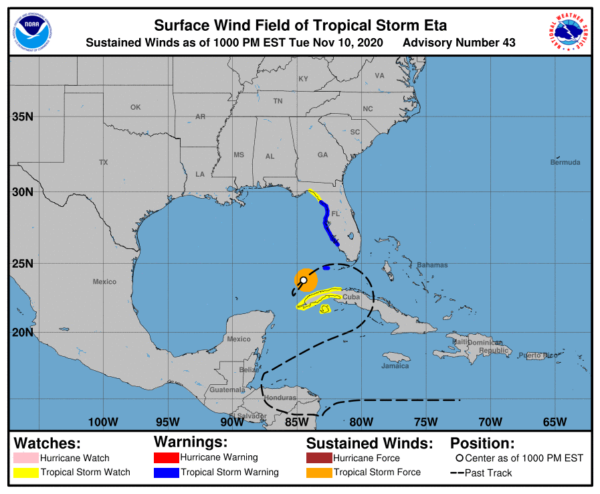 A Tropical Storm Warning has been issued for the Florida west coast
from Bonita Beach to the Suwannee River.

A Storm Surge Watch has been issued for the Florida west coast from
Bonita Beach to the Steinhatchee River, including Tampa Bay and
Charlotte Harbor.

A Tropical Storm Watch has been issued for the Florida Gulf coast
from north of the Suwannee River to the Aucilla River.

A Storm Surge Watch is in effect for…
* Bonita Beach to Steinhatchee River Florida, including Tampa Bay
and Charlotte Harbor

A Tropical Storm Watch is in effect for…
* The Cuban provinces of La Habana, Artemisa, Mayabeque, Pinar del
Rio, and the Isle of Youth
* North of the Suwannee River to Aucilla River Florida

DISCUSSION AND OUTLOOK
———————-
At 1000 PM EST (0300 UTC), the center of Tropical Storm Eta was
located near latitude 23.8 North, longitude 84.5 West. Eta is moving
toward the north-northeast near 9 mph (15 km/h). A motion toward the
north-northeast is forecast through Thursday. On the forecast track
the center of Eta will move closer to but offshore of the southwest
coast of Florida on Wednesday, approach the west-central coast of
Florida Wednesday night, and move inland over the northern portion
of the Florida peninsula on Thursday.

Data from a NOAA Hurricane Hunter aircraft indicate that the maximum
sustained winds have increased to near 65 mph (100 km/h) with higher
gusts. Some additional strengthening is forecast through Wednesday,
and Eta could be near hurricane strength by Wednesday morning.
Gradual weakening is expected to begin Wednesday night or early
Thursday.

Tropical-storm-force winds extend outward up to 70 miles (110 km)
from the center.

The estimated minimum central pressure based on reconnaissance
aircraft data is 992 mb (29.30 inches). 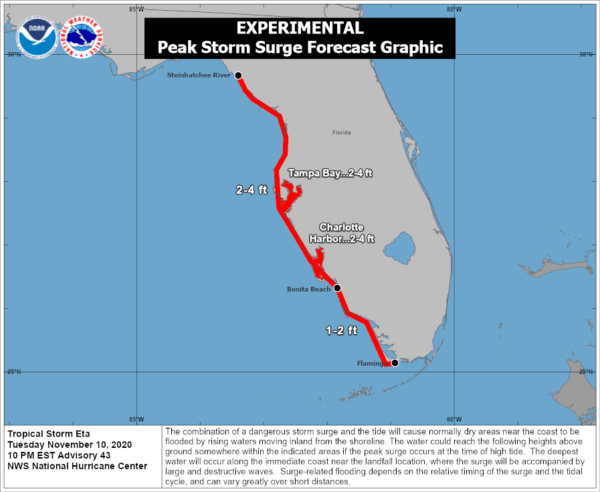 STORM SURGE: The combination of a dangerous storm surge and the
tide will cause normally dry areas near the coast to be flooded by
rising waters moving inland from the shoreline. The water could
reach the following heights above ground somewhere in the indicated
areas if the peak surge occurs at the time of high tide…

The deepest water will occur along the immediate coast in areas of
onshore flow, where the surge will be accompanied by large and
dangerous waves. Surge-related flooding depends on the relative
timing of the surge and the tidal cycle, and can vary greatly over
short distances. For information specific to your area, please see
products issued by your local National Weather Service forecast
office.

RAINFALL: Eta is expected to produce the following rainfall through
tonight:

Eta is expected to produce the following rainfall amounts through
Friday:

West Florida into the eastern Florida Panhandle and portions of
North Florida: 1 to 3 inches, with isolated totals of 5 inches.

Flash and river flooding will be possible in western Cuba through
tonight, along with landslides in areas of higher terrain.
Additional flash and urban flooding will be possible in South
Florida tonight, especially across previously inundated areas, and
eventually across portions of west Florida, the eastern Florida
Panhandle, and north Florida Wednesday through Friday. 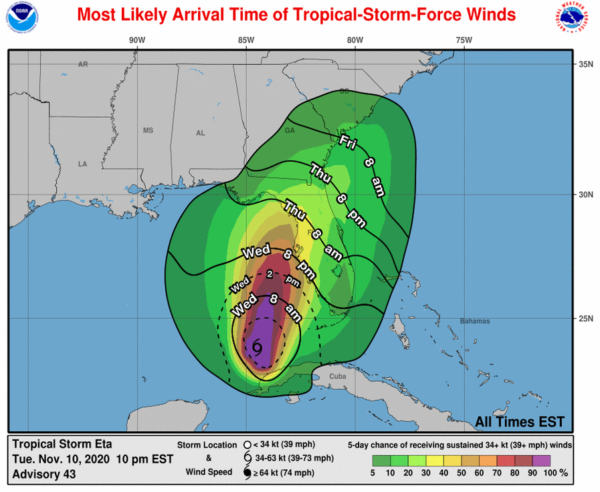 SURF: Swells generated by Eta are expected to affect the north
coast of Cuba, southern and western Florida, and the Florida Keys
during the next day or so. These swells are likely to cause
life-threatening surf and rip current conditions. Please consult
products from your local weather office.