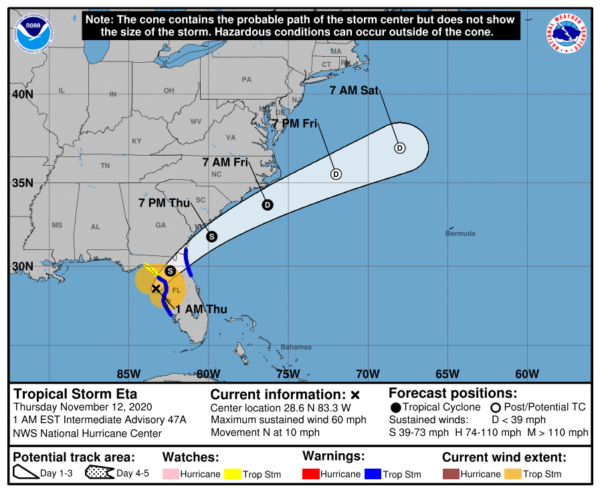 The Tropical Storm Warning south of Englewood has been discontinued.

A Storm Surge Warning is in effect for…
* Bonita Beach to Suwanee River Florida, including Tampa Bay
and Charlotte Harbor

DISCUSSION AND OUTLOOK
———————-
At 100 AM EST (0600 UTC), the center of Tropical Storm Eta was
located near latitude 28.6 North, longitude 83.3 West. Eta is moving
toward the north near 10 mph (17 km/h), and this general motion is
expected to continue overnight, followed by a turn toward the
north-northeast and northeast this morning. On the forecast track,
the center of Eta will move near but just offshore of the
west-central coast of Florida during the next few hours, and move
inland over the northern portion of the Florida peninsula this
morning. Eta is expected to move northeastward into the western
Atlantic late today and early Friday.

Maximum sustained winds have decreased to near 60 mph (95 km/h)
with higher gusts. Slow weakening is expected as Eta approaches the
west coast of Florida during the next few hours, followed by more
rapid weakening after landfall occurs later today. Eta is forecast
to dissipate over the western Atlantic Ocean by the weekend.

STORM SURGE: The combination of a dangerous storm surge and the
tide will cause normally dry areas near the coast to be flooded by
rising waters moving inland from the shoreline. The water could
reach the following heights above ground somewhere in the indicated
areas if the peak surge occurs at the time of high tide…

The deepest water will occur along the immediate coast in areas of
onshore winds, where the surge will be accompanied by large and
dangerous waves. Surge-related flooding depends on the relative
timing of the surge and the tidal cycle, and can vary greatly over
short distances. For information specific to your area, please see
products issued by your local National Weather Service forecast
office.

RAINFALL: Eta is expected to produce the following rainfall totals:

West and central Florida, through today: 2 to 4 inches, with
maximum storm total accumulations of 6 inches.

North and South Florida, through today: An additional 1 to 2
inches, with isolated maximum storm total accumulations of 4 inches
in North Florida and 20 to 25 inches in South Florida.

TORNADOES: A few tornadoes are possible overnight over parts of
western and central Florida.

SURF: Swells generated by Eta are expected to affect the north
coast of Cuba, southern and western Florida, and the Florida Keys
during the next day or so. These swells are likely to cause
life-threatening surf and rip current conditions. Please consult
products from your local weather office.