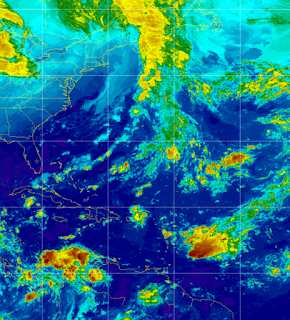 What the NHC is selling down below. 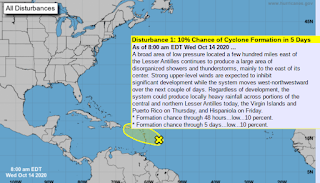 NHC keeps pulling this Invest back.

But showing it because it’s relevant.

The image below is more relevant. 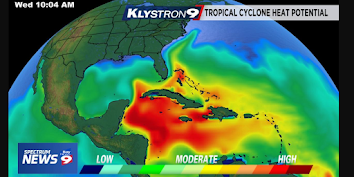 It just needs the right candidate. 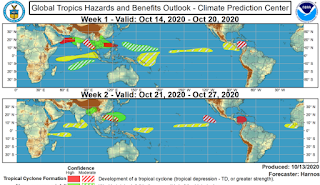 Everyone’s passing it around online.

When you see RED you expect development.

Development of some kind tropically speaking.

Below another graphic we use often.

Purple means something could happen. 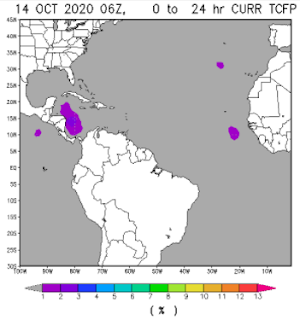 So you are going to ask by now “where’s the storm” and the answer is that we need to have patience and not jump on every way of cluster of convection assuming this is the one that will light the power keg and development will happen. Caribbean storms in October don’t happen like that, it’s not the specific wave or convection but the situation that eventually produces a tropical storm or a hurricane because the set up demands a system. High pressure to the North, a lowering of pressures to the South in the Caribbean that always wants to spin something up and then a wave wanders in and convection begins to congregate, pressures lower more and eventually we go from candy striper red to fire engine red further down the road and then depending on a front approaching this named storm we will then see what angle of approach the departure out of the Caribbean will be and where the cone sets up..  So let’s look at a satellite image below. 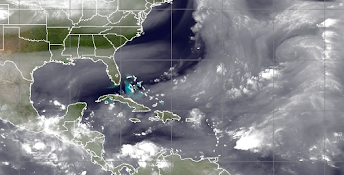 This time of year we have clusters of convections, often remnants from westbound waves that didn’t previously develop and we have a general mess of convection and that is exactly why pressures begin to lower.  High pressure to the North often carves out rare dry air and skyblue skies over South Florida and Miami people can almost smell the beautiful balmy days and cooler nights of winter coming in a month or so … after the Hurricane Season is totally gone and Winter sets in. And, then a front approaches, and then the high builds in and then a front approaches and if you have ever played Minature Golf and tried to get that ball in while the windmill was turning you know what I’m talking about here. It’s all about timing.

We have two waves, the one still hanging out at the entrance to the Caribbean currently known as Invest 93L and a new cluster in the SW Caribbean that is just “there” for now.

So I’m giving a thought here that is it possible, though not yet probable, that we could infact have two stystems forming down the road. One deep down in the Caribbean your typical strong, October hurricane that wants out of the Caribbean and another system in the Atlantic closer in to Florida or in general close to the East Coast.  Every front dies outs and dangles eventually in the still warm waters of the Tropical Atlantic and if a wave that didn’t develop gets into the Caribbean into that inviting warm area, something could try and form and those on the East Coast would watch it carefully thinking “I thought Hurricane Season was all over in October” while people in Florida get a headache jerking their head back and forth watching the Caribbean down below and any area that looks questionable closer in. 2020 has favored for Pop Up Close in systems so pay attention as this is favored from a Climo perspective just as the SW Caribbean is a favorable area for development.

Dabuh showed a model earlier that did illustrate this set up with two systems and yes it’s the Canadian but it often is right early on, even though the exact details of location and strength vary down the road it tells us to keep watching future runs and any signs of real development. Right now we are just looking at candidates for Invest 94L and Invest 95L and I’d worry on those Invests more than 93L. And, the GFS (shown below) also hints at two areas that need to be watched way down the tropical road, so sharing this tweet from Dabuh who is always good to follow so keep in mind that it is possible we see two not one systems as would be in perfect alignment with 2020. 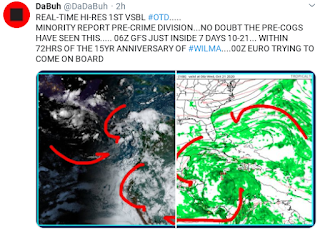 Also there is a wave off of Africa.

That could be a long range candidate for the Carib.

Or not… but either way it’s there so we watch.

Probably one of the last real waves.

We are into Mid October now.

So that’s the story …that’s what’s going on. We simply have to wait until deeper in the week, or a week’s time to see things begin to come together and jell. Even when you make Jello it doesn’t just immediately jell it has to cool off, set and jiggle just right before you attempt to eat it. I’m not a huge fan of jello, pudding yes but jello no but that’s just me. I am a huge fan of any Judicial Hearings being held no matter who the candidate is as one of my degrees is in International Relations that was basically an outgrowth from my original second major in Political Science because I was a PreLaw student but those maps and demographics just stole me away into the International Relations and that department was very happy to have me as a Major as they were just beginning to offer that degree and so as much as I love tropical weather or any weather I’m preoccupied today watching the process work and listening to all the legal discussion along with the layer, as always, of political intrigue thrown in there.

I’ll update as soon as we have something worthy of updating on but that’s the story of… that’s the glory of a quiet day in the tropics. My advice to you is not to eat all the Twinkies in the Hurricane Supply box and know that this is the calm before whatever storm late October throws at us.