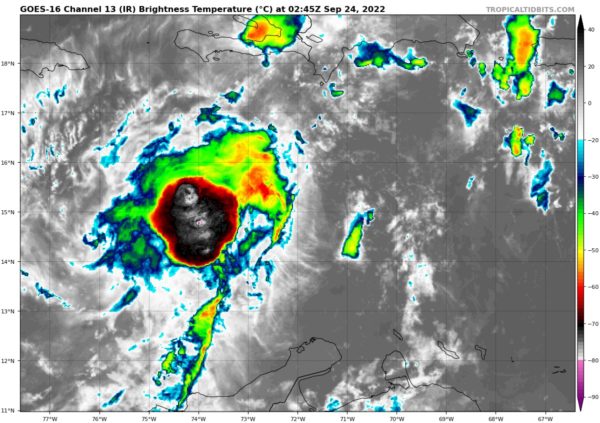 Based on satellite imagery tonight, the NHC has upgraded the depression in the Central Caribbean to tropical storm status and named it Ian.

In any case, the hurricane will be a major hurricane by the time it approaches Florida. In fact, the Hurricane Center’s forecast of 115 mph may be low if that happens.

Ian will turn northwestward over the northwestern Caribbean, cross Cuba on Sunday and be in the southeastern Gulf by Monday.

Tropical storm conditions will begin to overspread Florida on Tuesday.

There is a good deal of uncertainty in the eventual track as the GFS is now further west, carrying the storm into the northeastern, and affecting eastern sections of the Panhandle, but not before Thursday. The Euro turns Ian northeast faster, crossing southern Florida on Wednesday.

If the GFS is right, the system will run into a tremendous amount of wind shear over the northern Gulf as a frontal system begins to push offshore of the Gulf Coast on Monday.

The official track carries the center to near Tampa Wednesday as a 115 mph major hurricane.