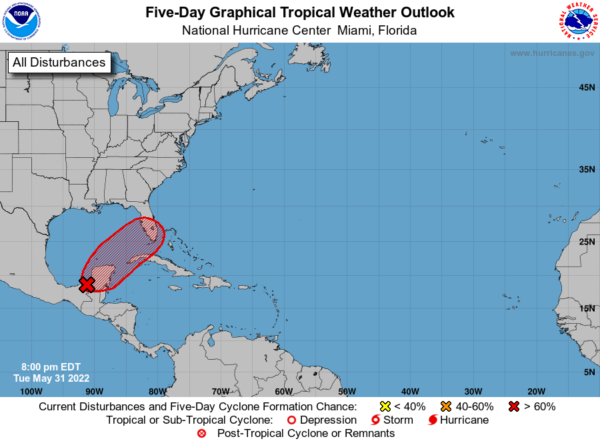 The remnants of Hurricane Agatha continues to move northeastward across the Yucatán Peninsula and will emerge over the northeastern parts of the Caribbean Sea and the southern Gulf of Mexico late Wednesday night or early Thursday morning.

The National Hurricane Center is giving the remnants a 70% chance of developing into a tropical system once again. Tropical depression formation is likely; but, if it becomes a tropical storm, it will be called Alex. It will move northeastward across the Gulf of Mexico throughout the end of the week and move across the Florida Peninsula starting late Friday night and emerging over the Atlantic by Saturday afternoon or early evening, bringing with it heavy rains and breezy conditions.

Once it moves out over the Atlantic, it will continue to move away to the northeast and will become a fish storm. Odds are high that it will be at tropical storm strength by Sunday just off the coast of Florida, Georgia, and South Carolina.

While the system will not make a direct impact on the Gulf Coasts of Alabama and the Florida Panhandle, there may be an increased risk of rip currents late this week and through the weekend.

Here is the latest from the NHC: