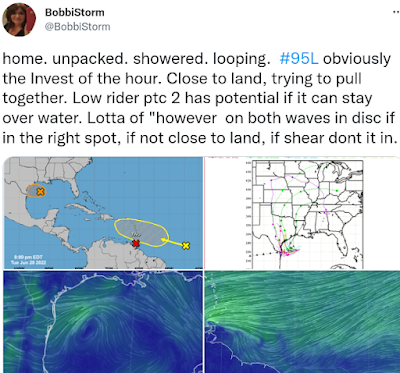 Lots of things to look at for possible development, but which one gets the name. And, which one is currently most important! Most relevant? Yes, Potential Tropical Cyclone Two has weather and strong winds, but it’s also periously close to land and that inhibits tropical development. Surface observations in Trinidad and adjacent islands so far have not shown a closed center of circulation.

Eartnull shows a maybe but still not obvious at the surface.

Later over water again it has a chance!

Rainy with some wind. 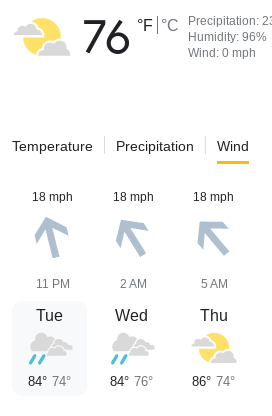 But the GOM… Earthnull a real wow! 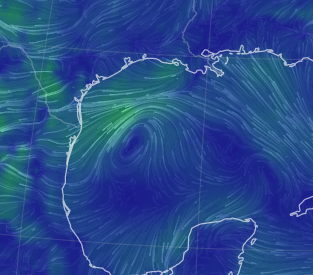 More so the models show problems. 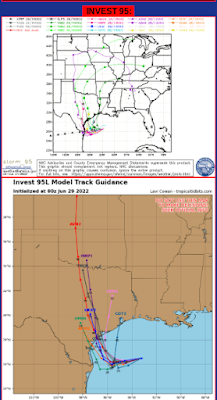 Look at those models!

Some show Oklahoma gets rain ….

Other show the rain gets caught and pulled NE…

As for the beautiful tropical wave behind it, it’s got the same difficult path as TWO yet models pull it higher, yet it’s not looking as good as it did when it came off of Africa. And, that is the song of June, they pop off Africa looking exciting, they hold their breath for a selfie and then they begin to fizzle.

CLIMO wins. The wind pattern isn’t supportive, the water temperatures not supportive enough and Saharan Dust is still there doing it’s June and July thing. And, THAT……is why the tropics come alive in late July going into August and September is a time to remember.

So always look close in at the Gulf of Mexico and at any remnant of a cold front dangling near South Florida or the Carolinas for possible fast spin up, close in action. And we still have fronts dangling…. 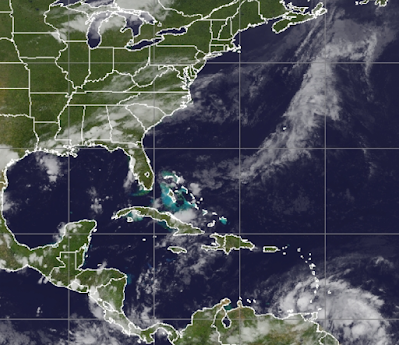 Two putting on quite the show.

Trying to get a name.

Front 2 out in the Atlantic… watch it.

But prepare your hurricane plans.

Better to be prepared than to panic!

On a personal level…

In the 1980s I lived in California. One of the nicest couples I knew were part of a group of 5 or 6 couples who would get a babysitter and go out for the evening to play PACMAN or PINBALL or take walks at Ports of Call or have drinks at the Queen Mary. Our kids played with eachother as if we were one big family and we worked hard at our jobs with love, passion and dedication. Long Beach, then LA and I did LOVE LA! Late nights at Disney together walking around talking as we had Summer Passes to get in at night. Quiet times on the Jewish Sabbath or other holidays when we hung out as a group of close friends. Long Beach was my happy place for years and then we left and moved back to Miami.  This past week while I was missing in action from tropical discussion on the blog and online I was marrying off one of my sons to the daughter of one of my close friends who live in LA. The wedding was in Atlanta where the bride has been living. Amazing how life works out. I have another daughter-in-law who lived in Long Beach and LA and she also was close with this family who married their daughter to my son! (if you could follow that…) The mother of the bride watched my son (the groom) when I went to the hospital to have my 2nd daughter. I mean how connected can you be? Amazingly the couple met through a friend and were married this week.

In Chabad the Sabbath before the wedding is special filled with party like get togethers and the wedding is huge and intense and the days after have after wedding celebrations. It’s been a whirl, a real storm of gratefulness, love and awe that this happened as trying to get anything pulled off in 2022 between Covid and travel problems at the airports with flight arrangements….NO ONE HAD A PROBLEM… OMG that in itself is a mini miracle.

Oh I also did the Atlanta Aquarium, because young grandchildren really love it.

Home, back at work and the tropics may heat up soon so Bonnie and Colin may form soon! And, if not sooner rather than later.

Thanks for your patience. I had a great time and am still in awe spending time with friends from California, Raleigh (oh I forgot to mention the bride worked here for several years and I was close with her here) and Florida! Kind of  like a family/friend reunion and life goes on…..

Prepare so you don’t panic at the last moment!