RADAR CHECK: We have some lingering light rain early this morning across parts of West, Central, and Southwest Alabama… rotating around an MCV (mesoscale convective vortex) southwest of Birmingham. This is all that is left of the big thunderstorm complex that brought damaging winds, flooding, hail, and thousands of lightning strokes to the state yesterday and last night. This rain will end over the next few hours, and by afternoon most of the scattered showers and storms will be found over the southern quarter of the state. With a partly sunny sky we expect a high in the 89-93 degree range this afternoon.

THE ALABAMA WEEKEND AND NEXT WEEK: Hot, humid summer weather is the story over the weekend and through next week as the upper ridge persists over the Deep South. Look for partly sunny days with highs mostly in the mid 90s and lows in the 70s. Each afternoon will see a few random, scattered, pop-up thunderstorms, but odds of any one spot getting wet each day will run in the 20-30 percent range. This is exactly what we expect in late July in Alabama. See the daily Weather Briefing video for maps, graphics, and more details. 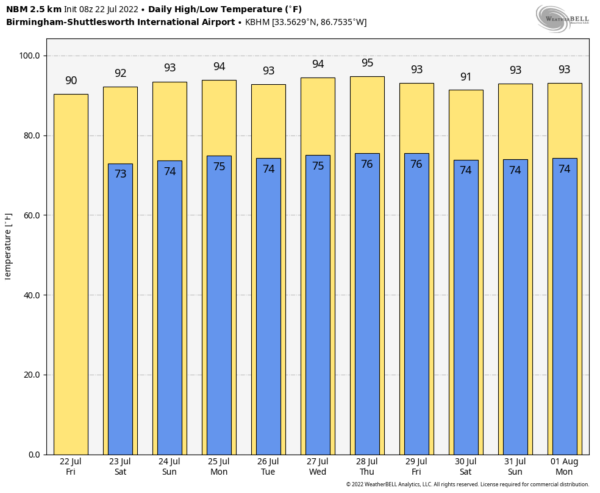 STORM FATALITIES: A 3-month old and a 3-year-old were killed when a tree fell on a home in the 600 block of 10th Avenue West in the western part of Birmingham yesterday. An 11-year-old was also in the house and was taken to Children’s Hospital with non-life threatening injuries. One woman was trapped in the house; she was freed before 9 p.m. Another woman was also rescued from the home near Birmingham-Southern College.

TROPICS: All remains very calm across the Atlantic basin and tropical storm formation is not expected through next week.

ON THIS DATE IN 1993: The levee, holding back the flooding Mississippi River at Kaskaskia, Illinois, ruptures, forcing the town’s people to flee on barges. The incident at Kaskaskia was the most dramatic event of the flood. At 9:48 a.m., the levee broke, leaving the people of Kaskaskia with no escape route other than two Army Corp of Engineers barges. By 2 p.m., the entire town was underwater.

James Spann is one of the most recognized and trusted television meteorologists in the industry. He holds the AMS CCM designation and television seals from the AMS and NWA. He is a past winner of the Broadcast Meteorologist of the Year from both professional organizations.