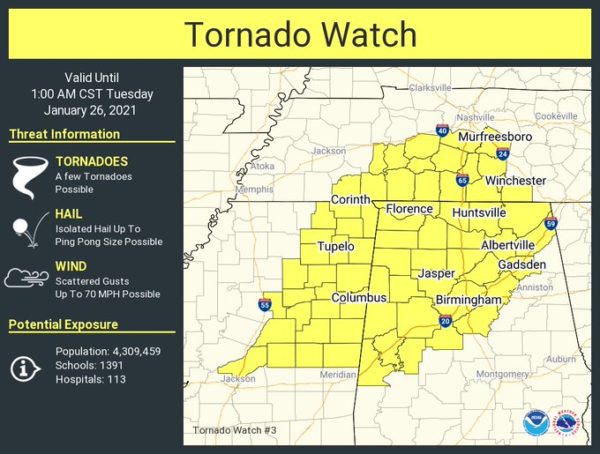 A Tornado Watch has been issued for

The NWS Storm Prediction Center has issued a

* Effective this Monday afternoon and Tuesday morning from 550 PM
until 100 AM CST.

SUMMARY…Thunderstorms are expected to intensify gradually this
evening in broken pre-frontal bands from central/northeast
Mississippi into western/northern Alabama and southern Middle
Tennessee. The storm environment will favor supercells capable of
producing a few tornadoes, damaging gusts, and isolated large hail
into the overnight hours.

The tornado watch area is approximately along and 80 statute miles
east and west of a line from 80 miles south southwest of Columbus MS
to 50 miles north of Huntsville AL. For a complete depiction of the
watch see the associated watch outline update (WOUS64 KWNS WOU3).

REMEMBER…A Tornado Watch means conditions are favorable for
tornadoes and severe thunderstorms in and close to the watch
area. Persons in these areas should be on the lookout for
threatening weather conditions and listen for later statements
and possible warnings.