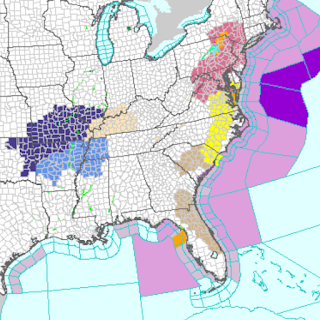 Another set of watches and warnings.

Earlier we had a Tornado Warning.

Possible rotation was up the road from my house.

Now we are demoted to a Watch. 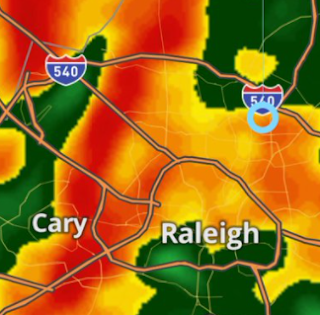 Yellow puddles from the rain…

As for me it’s annoying DURING a Tornado Warning when local channels go on the air giving information on a possible tornado that has been sighted and rather than give fast information where it is they start showing canned video of the difference between a “watch” and a “warning” because if it’s seriously a danger…. give the info, tell people to take it seriously and explain the definitions later.

It’s become a hot topic among mets as to whether people understand the difference between a Tornado Watch (means watch out a tornado might form in your area) and a Tornado Warning (duh…warning warning get to your safe room) and I’ve discussed this at lectures and asked people if they know the difference and to be fair they all knew the difference. Often they ignore a Watch as it’s across a wide area and they live in denial, but when someone says “tornado WARNING” they get scared and take it seroiusly. Never has anyone old or young ever told me they didn’t understand the difference. Obviously if English isn’t their first language there may be a problem, but when all the devices go off in your house with a whirling, buzzing sound with the warning a tornado is in your area… they kind of get the idea. Honestly, the phones went off so loud I thought Russia was attacking……………. 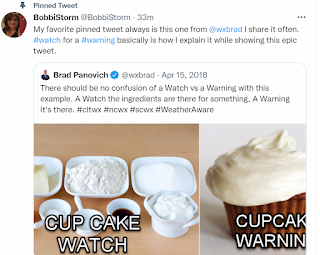 The Tweet above by the amazing Brad Panovich in nearby Charlotte is the best illustration I’ve seen for anyone who doesn’t understand the difference. Ingredients are there in the atmosphere that is ripe for development and a Warning means a Tornado has formed or a Snowstorm will be seen in your town. It’s clear cut and I’ve shared it often during the Hurricane Season. All my life growing up in Miami we understood a “Watch” meant we could be in the path of the Hurricane, a Hurricane Warnings means we should see hurricane force winds in our area.

Most people I have spoken to on this who didn’t leave Miami for Andrew or didn’t leave New Orleans for Katrina all said they just didn’t believe it would really hit. In Miami, of late, hurricanes have cruised by just offshore turning sharply before making landfall. From Matthew to Dorian they all turned and curved away and this sense of false security sets in the way it did after Hurricane David turned away in 1979 and a little over a decade later when Andrew made a beeline for Miami and the National Hurricane Center insisted it would make landfall… many people I knew couldn’t believe it would because “they all turn away” but it didn’t turn away.

This is a common problem in areas that don’t take direct landfalls from Major Hurricanes, yet get sideswiped often by hurricanes turning away or weaker storms that don’t blow their house down. They pick up a few limbs, try to put the Ficus Tree upright or complain the screening around the pool got blown away. They just can’t believe a Major Hurricane is about to make landfall, no matter what warnings the NHC put out. And, sadly the remedy for that denial is being hunkered down in the bathroom while the house around you sounds like it is exploding as it did to many people I know who lived through Hurricane Andrew. Trust me the moment there is a Hurricane Warning they book the first flight out of town they can no matter the cost or jump in the car and drive North as fast as they can.

Now may be a good time to mention there are 45 days until we begin the daily Tropical Weather Outlook from the NHC showing us if there is any yellow circle somewhere in the tropics or that there is nothing expected to develop in the next 5 days.

And somewhere, someone will be in the path of a potential deadly landfall and knowledge is power.

Watch for a warning. A Hurricane Watch means a hurricane may be coming your way, a Hurricane Warning means the NHC feels you WILL have Hurricane force winds! If you don’t believe me ask Google.

Link for the day:

Check it out and read up on what you need to know because before you know it … it will be Hurricane Season and we may even have a named storm in May.

Ps a cute song I used to love and still do. Sometimes those things and people you love you love in some way forever. And, now that I live in NC during Pollen Season I stare at the yellow colored puddles and think of this song.  Yellow is such a pretty color…. kaledidoscope like in puddles on a gray background.