High-pressure ridges can be tenacious in October, and our current one is going to go kicking and screaming it appears. It has already put the kibosh on frontal systems that have proposed to pass through the state in coming days. But it’s reign shall end eventually. But for now, warmer than normal temperatures for late October will continue. 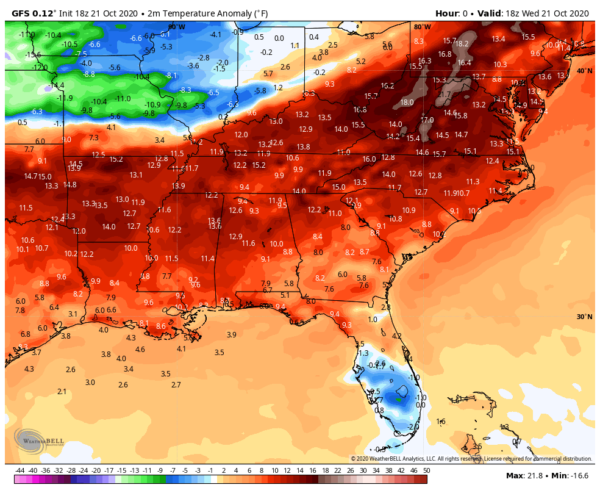 MORNING CLOUDS/FOG: Some spots over mainly western sections of Alabama are seeing low clouds and fog again this morning as the lower levels of the atmosphere become saturated. This cloudiness will slowly burn off this morning as the sun works its magic.

ANOTHER WARM ONE: As the sun wins the battle today, it will heat things up to about 8-10 degrees above normal for this time of year. Highs today will range between 80-85F. With dewpoints hovering in the middle 60s, it will feel a little sticky. A few isolated showers may manage to break out this afternoon in different spots across Central and North Alabama and look for another potential round of light showers overnight. Rainfall amounts will be light and coverage spotty.

APPROACHING FRONT: By Friday morning, we will be tracking a frontal system near St. Louis. It will be pushing southeastward towards Alabama during the day, and scattered showers and storms will break out ahead of it, mainly in areas north and west of I-59 during the afternoon and evening hours. The storms won’t be strong, and rainfall amounts will be light, less than one-quarter of an inch generally. Highs will be in the upper 79s to lower 80s.

FRIDAY NIGHT LIGHTS: For the high school games Friday night, and for UAB’s tilt at Legion Field with Louisiana at 7 p.m., showers and storms are possible, with a cloudy sky. A lightning delay or two is possible, but not likely. Temperatures will be in the 70s.

WEEKEND OUTLOOK: By Saturday, the front will be running out of steam as it runs into the high-pressure ridge. Additional showers and storms should sink southeastward late Friday night into Saturday morning. Those showers and storms should slide southeast of I-59 by afternoon. The rainfall won’t be widespread of heavy, and the storms won’t be especially strong. Highs on Saturday will be in the upper 79s to lower 80s. Sunday will feature partly cloudy skies with a few lingering showers and highs in the lower 80s.

GRIDIRON FORECAST: Saturday, Auburn will take on Ole Miss in Oxford (11a CT kickoff)… just a slight risk of a shower during the game, otherwise expect a mix of sun and clouds with temperatures rising from near 66 at kickoff to 70 degrees by the final whistle.

Alabama is also on the road; they take on Tennessee in Knoxville (2:30p CT kickoff).The sky will be occasionally cloudy, and a few passing showers are possible. Temperatures will be in the low 70s.

NEW WORK WEEK: We have been watching for an additional front to arrive early in the following week, but it appears that the high pressure ridge will win out again, at least in the precipitation department. Monday looks like it will feature partly cloudy skies with highs in the 80s. Tuesday should feature more clouds and scattered showers and storms as the front approaches. Highs should be limited to the 70s. Wednesday will feature clearing skies and slightly cooler conditions. Morning lows will return to the lower 50s by Wednesday, more in line with late October averages.

MODEL DIFFERENCES: There is substantial disagreement between our two main global models about that midweek system. The GFS is much stronger and wetter with a system coming in Wednesday.

BEACHCAST: Warm October conditions continue along the beautiful beaches of Alabama and Northwest Florida. Sunshine today, but thunderstorms tomorrow and lingering showers and storms on Saturday. Sunday and Monday look mainly dry, and Tuesday should only feature a slight chance of shower and storms. Highs will be in the 80s, lows in the upper 60s and lower 70s. Water temperatures are still in the lower 70s.

DANCING WITH THE STATS: 1.7 inches of snow at East Rapid City, SD yesterday was a record for the date.

ON THIS DATE IN 2011: Residents across the Midwest into the Deep South were astonished by a brilliant display of the Northern Lights. The aurora borealis is rarely visible south of the northern tier of the United States, but people as far south as Oklahoma, Arkansas, Mississippi, Alabama and Georgia reported seeing the phenomenon. Auroras were photographed in more than half of the 50 states. The display was caused by an unusually intense geomagnetic storm. Follow my weather history tweets on Twitter. I am @wxhistorian at Twitter.com.