Hurricane Ian turned out to the be the 5th strongest hurricane to ever hit the United States. The center of Hurricane Ian made landfall near Sanibel Island and Punta Gorda, Florida, going only a few miles south of my father’s home and leaving my father in the eye wall of the storm for about 12 hours yesterday. The hospital near him in Port Charlotte had part of its roof blown off in the intensive care unit and had a foot of water on the first floor. I have received a few text messages from my father who had sheltered in the laundry room in his home. I am uncertain of exact details as the texts have been sporadic, but it appears he had sheltered in the laundry room in his house and had to constantly be pulling on the door to hold it shut, I am assuming because the windows had blown out in his home. I had not heard of him after that text the middle of yesterday but received a text at 1 am that he was alive, and the storm was ending. He asked me if I got the picture of his feet, so I am assuming he got water in his home, just don’t know for sure if it was rainwater or flooding from the Harbor and Gulf of Mexico which are within 2 miles of his home. He lives on a peninsula between the Gulf of Mexico and Charlotte Harbor, near Rotunda.

Ian has now weakened to Tropical Storm strength as it is moving north, north, eastward through Florida and approaching the Florida East Coast near Orlando. Ian will continue moving northward, making a second landfall between Savannah, Georgia and Charleston, South Carolina tomorrow morning, likely at strong Tropical Storm strength, or possibly as a weak hurricane. The remnants of Ian will then continue moving northward, reaching our area Saturday and bringing heavy rain to much of our area, as well as gusty winds. The remnants of Ian may break in two once it gets this far north, with some heading further westward towards Ohio and West Virginia and some coming in our direction. Depending on the exact track of these remnants of Ian, there will be a chance of showers or thunderstorms continuing Sunday through Tuesday.

Below is the potential rainfall map through Wednesday, but again, this is all dependent upon the exact track of the remnants of Ian, which is currently uncertain. 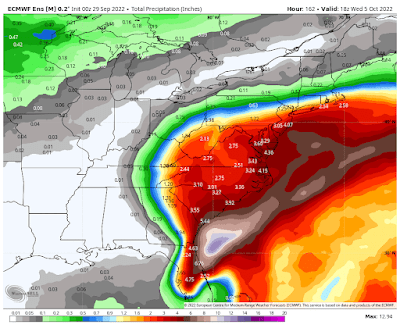 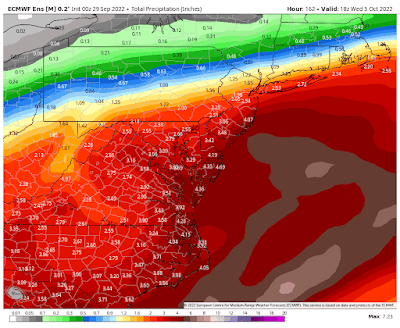