After the Birmingham tornado Monday night, we’ve seen items like this, emphasizing that the South has 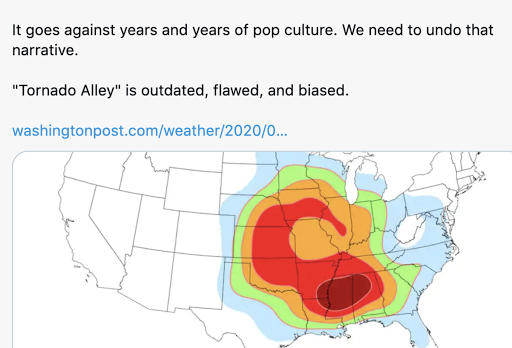 a serious risk of strong tornadoes and that the traditional “tornado alley” may be a flawed notion [I agree and have for many years].

Others, like CBS News, are claiming tornado alley has shifted east due to global warming. This hypothesis comes from climate models.

The hypothesis that tornado alley fluctuates geographically is not new. And, the recent rash of damaging tornadoes in the South may be part of a recurring pattern rather than a long-term climatological shift.

along with co-authors Allen Pearson and David Ludlum. 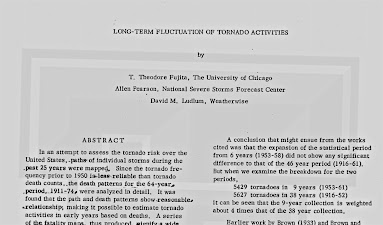 Special thanks to Linda Hall Library

Early in the paper, Ted wrote,

Earlier work by Brown (1933) and Brown and Roberts (1935) did not emphasize an Oklahoma-Kansas maximum. Instead, the high risk areas, as revealed by maps showing paths, suggested that Arkansas, Mississippi and Alabama were tornado prone…  [emphasis mine]

This leads to natural speculation — what is the true distribution of tornadoes over the Midwest? Are the variations random…or are the movements systematic?

In the 1970’s, Fujita clearly recognized that “tornado alley” (the stripe from north Texas through Kansas to Iowa often seen in popular publications) might not be the most accurate depiction of tornado risk. His paper observed that, based on the limited data available, there may be a 45-year cyclic pattern of the ‘tornado alley’ shifting east and west and north and south. For meteorologists and climatologists who are interested, their methodology is contained in the paper which is at the red link (above).

Fujita described a maxima of relatively high tornado fatalities over the South from 1934-1940 (his Figure 14, below). 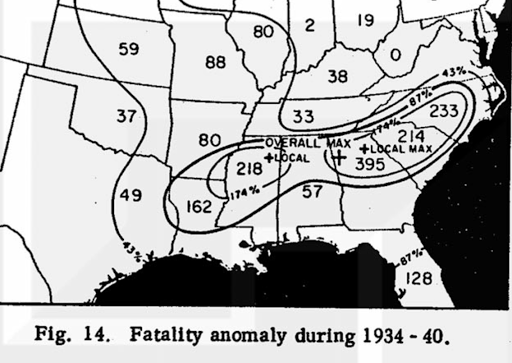 If his hypothesis is correct, the passing of time would yield two subsequent 45-year cycles — which would bring us to about the 2020’s. So, perhaps, it would not be surprising the South has suffered more than usual devastating tornadoes in recent years. The Birmingham Tornado last night has been rated at F-2 intensity — a very significant tornado.

With Fujita’s assistance, I did some work in the 1990’s that tended to indicate that since the paper had been published in 1975 the cyclic pattern seemed to have held. I have not done additional work since 1992. There is no reason to believe global warming is involved.

It is important to note, that Fujita, Pearson and Ludlum were charting a relative increase in tornado danger, not absolute. Just because the tornado risk may be relatively high in the South right now, strong tornadoes can certainly occur elsewhere if the right ingredients come together on a given day.