It is a mostly cloudy, warm, and humid Sunday across Alabama, with sunshine burning through the cloud cover in many spots. Temperatures are responding nicely, rising through the upper 60s and lower 70s now. A nice southerly breeze is pumping in moisture as well.

High temperatures will range from 64F in Northeast Alabama to around 80F at Tuscaloosa and Demopolis.

Most of the day should be dry, although a few showers could break out at any time across the northern third of the state.

After 7 p.m., showers and storms will move into Northwest Alabama: 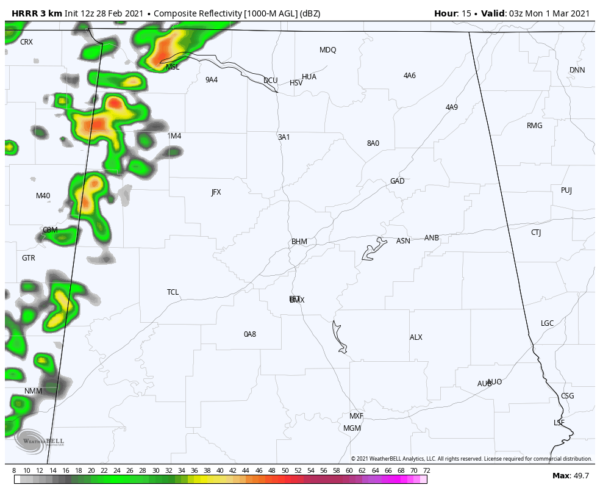 The storms will progress east through midnight, and the best parameters for severe weather including tornadoes will be in these areas: 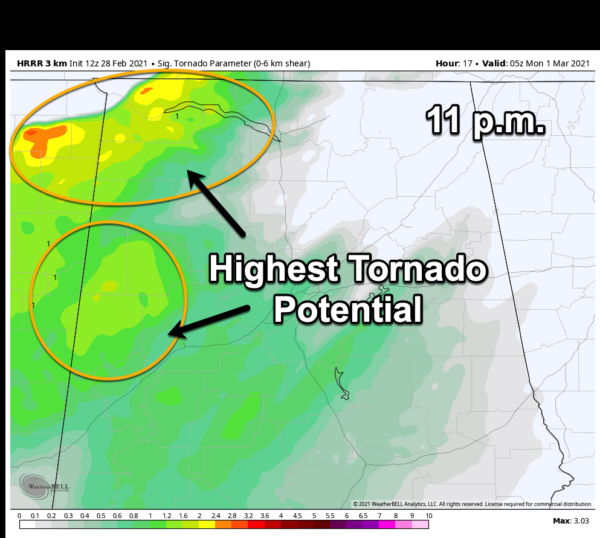 SEVERE WEATHER OUTLOOK: The SPC has issued a severe weather risk for tonight for the northwestern quarter of Alabama, roughly along and northwest of a line from Aliceville in Pickens County to Jasper to Cullman to Scottsboro. 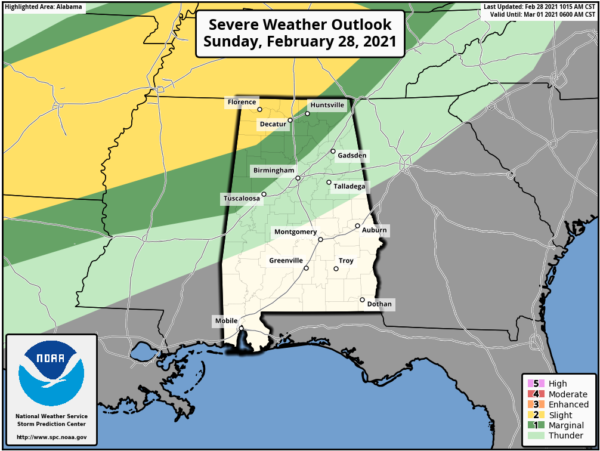 The higher chance is in a Slight Risk (2/5) area that is northwest of a line from Red Bay in Franklin County to Athens in Limestone County. The main threat is damaging winds and some large hail, but there could be a few tornadoes later today and tonight from Northeast Texas across Arkansas, northern Mississippi, western and Middle Tennessee, and into Kentucky to include the northwestern corner of Alabama.

EXPECT THE UNEXPECTED: With thunderstorms in Alabama, however, as we always say, especially in late Winter and Spring, “Expect the Unexpected!” And that means keep an eye on later forecasts and information we post here on the blog.

LATE TONIGHT INTO MONDAY: Heavier rain and storms will overspread North Alabama after midnight, with the storms reaching Jasper around 3 a.m. The will be wakening by that time, reaching Birmingham, Tuscaloosa, and Anniston by 4-5 a.m. A large area of rain will spread over North and Central Alabama through noon. Morning readings in the middle 50s will not rise much during the day, remaining in the middle and upper 50s. Rainfall amounts will be less than one inch south of I-20, with 1-2 inch amounts to the north. 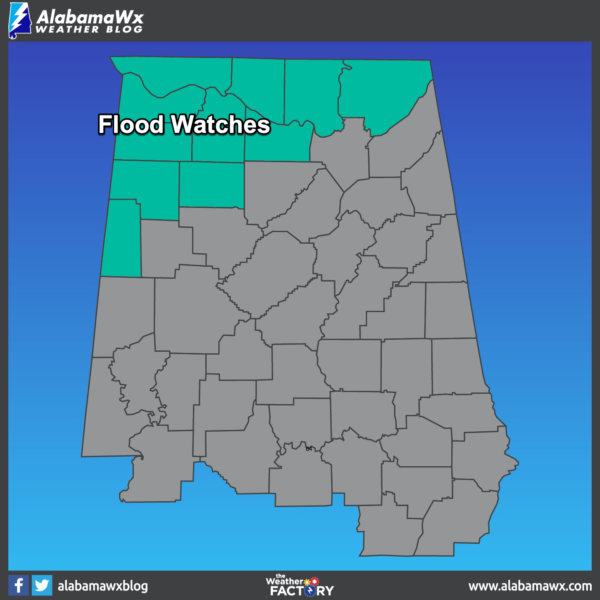 FLOOD WATCHES IN EFFECT: Flood watches are in effect for tonight into Monday morning for parts of North and West-Central Alabama.