As we’re crossing over to the 4 pm hour on this fine Wednesday afternoon, skies were sunny across the northern half of the area, while some clouds have move in from the south over the southern half of Central Alabama. The 3 pm roundup showed temperatures were in the upper 50s to the mid 60s across the area. Alexander City was the cool spot at 58 degrees. Demopolis was the warm spot at 66 degrees. Birmingham was at 61 degrees. 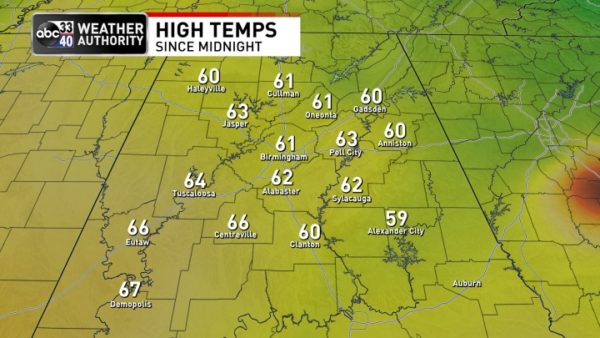 Afternoon highs were not too far off from those 3 pm roundup temperatures, as highs topped out in the upper 50s to the upper 60s. Alexander City was the cool spot at 58 degrees. On the opposite end of the spectrum, Demopolis topped out at 67 degrees for the warm spot. Birmingham’s high was 61 degrees.

Clouds will be on the increase from the south through the rest of the afternoon and evening hours, but we’ll continue to stay dry through the rest of your Wednesday. Overnight lows will be much warmer than in previous days, thanks to that cloud cover, dropping into the upper 30s to the mid 40s.

A frontal system will be slowly making its way toward Central Alabama on Thursday that will continue to bring some clouds to the area, but we’ll have some sun at times as well. We could see a few showers over the extreme northwestern parts of the area and up into the western parts of the Tennessee Valley region by late afternoon and into the evening hours. Afternoon highs in the lower 60s to the lower 70s. 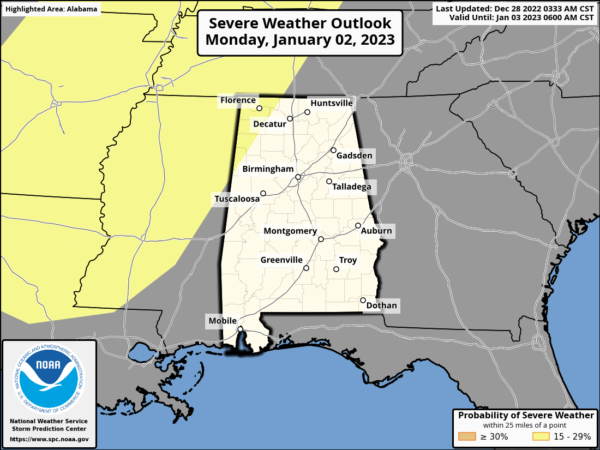 None of the activity that we’ll have in here on Friday and Saturday is expected to be severe, but we’ll have to watch an approaching system on Monday for the threat of severe storms. The SPC has places much of Mississippi, Tennessee, Arkansas, Louisiana, and the northwest corner of Alabama in the equivalent of a Slight Risk on their Day 6 Severe Weather Outlook. Damaging winds and a few tornadoes will be possible in those areas on Monday and Monday night. For now, the models have not been consistent enough for a severe threat to continue eastward on Tuesday, but we’ll keep you updated if anything changes.