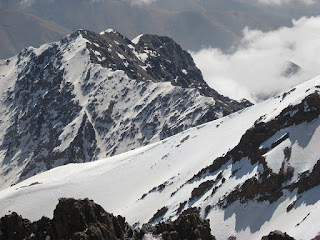 The media is full of stories suggesting that global warming has greatly reduced the mountain snowpack in the Pacific Northwest.

Activist “climate justice” groups like 350Seattle have taken the snowpack loss claims even further, suggesting the current snowpack is “half what it should be”:

But the truth, backed by observations, contradicts such apocalyptic descriptions, as I will show you in the blog.

Recently, the Office of the Washington State Climatologist (who is Dr. Nick Bond of UW JISAO) put online a wonderful tool for visualizing snowpack at some major locations in Washington State.  Plotting up the actual snowpack trend proves to be highly educational.

I am going to show you the change of snowpack for over the past fifty years.

Why fifty years?  Because that is the period when human emissions of greenhouse gases have gone up rapidly and when GLOBAL temperatures have risen more quickly (see plot below).  If you are looking for a period to see changes in Northwest snowpack driven by greenhouse gas increases, the last fifty-year period is the time to look for it. 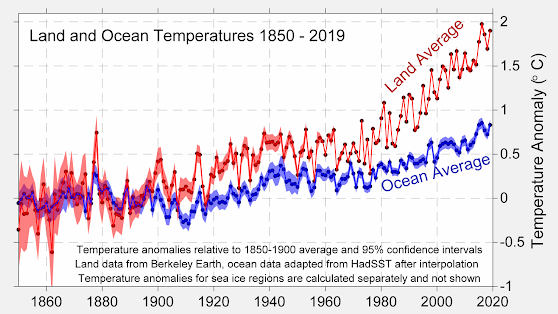 So using the OWSC website, let me show you the fifty-year trends of snow depth on March 15th each year.   I chose this date because it is close to the date of maximum snow depth in the Cascades and I have the data for this year.

Let’s start with the higher elevation Crystal Mountain ski area (around 6000 ft).  An increase from 1990 to 2000 and then relatively steady. 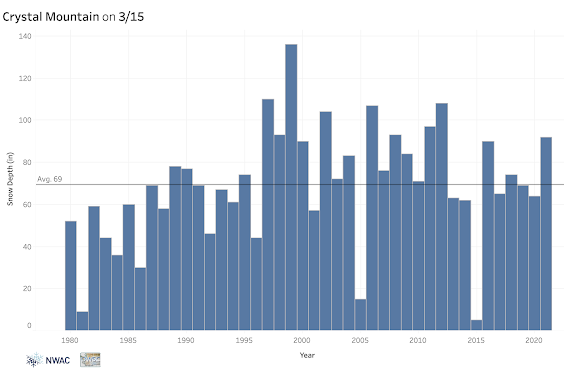 Next, lower elevation (~3000 ft) Snoqualmie Pass. Not much trend in snow depth. 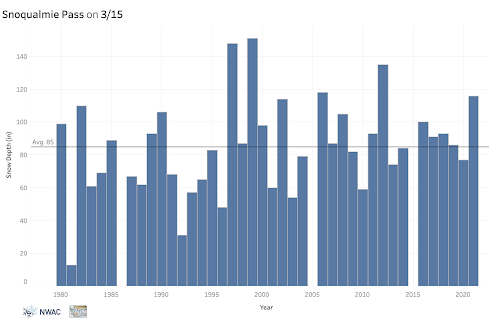 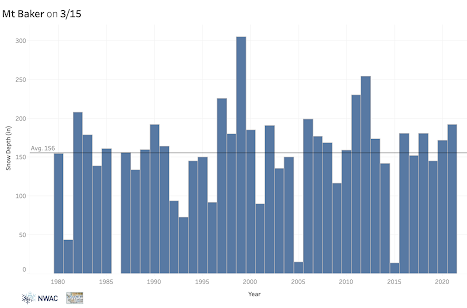 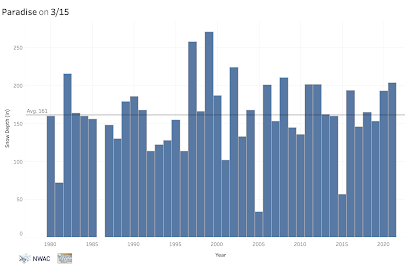 Yes, there are some random, low snow-depth years (like 2015), but no trend is apparent during the period when global warming has been greatest.

Another measure of the amount of frozen water in a snowpack is called snow water equivalent (SWE).  The OWSC website has a nice tool to plot the change in SWE, and I have done so for 1980 to 2019 (see below). 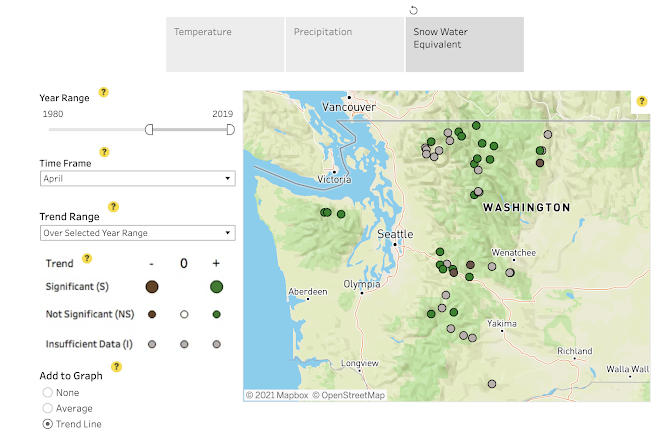 Finally,  University of Washington research scientist, Mark Albright, took over 200 USDA Snotel locations over the Northwest and plotted up the snow water equivalents (blue lines) since 1984 (when the data became available) as shown below (the red line is a smoothed running average).  Lots of ups and downs, but no long-term trend. 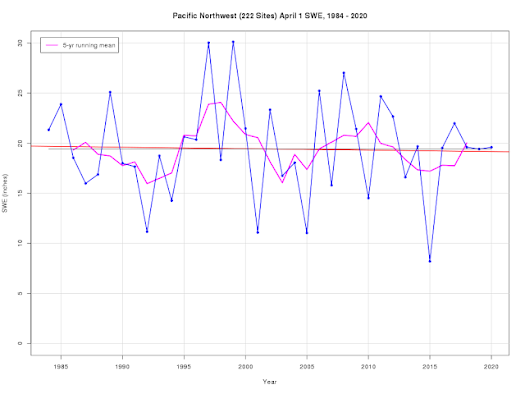 So the inescapable conclusion based upon snowpack observations is that there has been little trend in the amount of snow in the mountains of the Pacific Northwest during a period in which CO2 has been rising fairly rapidly and when global temperatures are going up.

How can this be?

It can and the reason is the Pacific Ocean.

Let me show you a plot of the trend (change) in surface air and sea surface winter (December-February) temperatures for 1980-2019 from the NASA Goddard (GISS) website (see below).  The Arctic is warming more than anyplace else and, in general, the continents are warming more rapidly than the oceans.  We expect this from basic physical principles and modeling.

Oceans warm up more slowly because of their tremendous heat capacity. 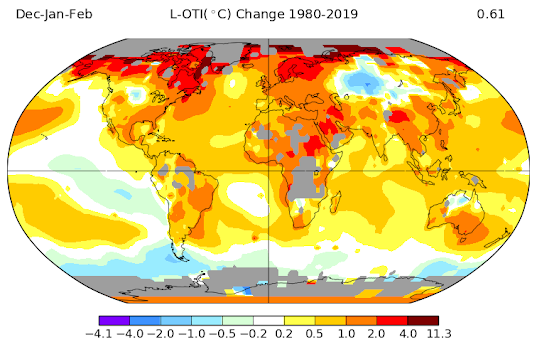 The temperature of the eastern Pacific has a very powerful impact on the winter temperatures of the Pacific Northwest, since air is coming off the Pacific virtually the entire winter.

So it makes sense that our winter snowpack has not changed because the sea surface temperature of the eastern Pacific has not changed.  This consistency provides us with more confidence in our understanding.

What about the future?  If we continue to pump greenhouse gases into the atmosphere, the Pacific will eventually warm and that WILL reduce the snowpack.

My group, in concert with Eri Salathe of UW Bothell, has been running many high-resolution climate simulations over the region (much of it supported by Amazon by the way).  This is the gold standard for regional climate predictions.

We assumed a very large increase of greenhouse gases (RCP 8.5), which is not realistic, but shows you the worst case (probably about twice a realistic value of greenhouse gas concentration by the end of the century).  It assumes mankind ignores the threat of global warming and revs up fossil fuel use.

Below is the forecast of snow water equivalent for this century at Stevens Pass (roughly 4000 ft) for simulations started in 1970.   The black dots are observations.

Not much change through 2018 in the model and observations, followed by a slow slide through 2050 and a more rapid decline through 2100. 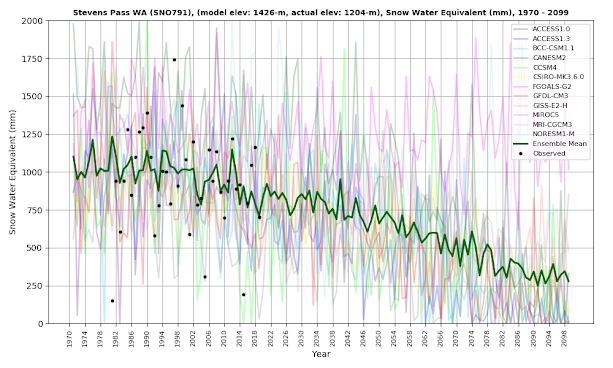 So even with unrealistically high CO2 emissions (assuming major increases in coal use through the entire century and little use of renewables), there are only modest declines through 2050 (about 25%).    A more realistic simulation would probably move the 2050 values to 2100.

I believe the above is the best estimate regarding Cascade mountain snowpack change available and consistent with the peer-reviewed literature (including papers I have authored on the subject).    I am sure that the activist crowd (e.g. 350Seattle, Charles Mudede at The Stranger) will start calling me names–like “climate denier” for providing it to you.   These folks can be very destructive.  For example, 350 Seattle and the climate justice crowd were able to pressure a fearful KNKX management team into removing my weather segment because the activists wanted the truth suppressed.

But no matter where you are on the political spectrum, you deserve the truth and society needs truth to make the best decisions and plan for the future. 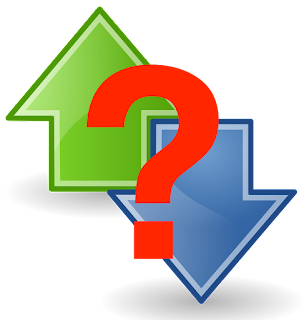