If there EVER was a year we needed a break from the cool, cloudy murk of the Northwest mid-winter period, this is it. 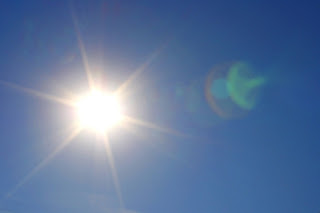 Sun that lessens the seasonal blues that many have this time of the year.

Sun and warmth that would facilitate outdoor eating during this COVID period when inside dining it closed.

Sun during the period of earliest sunsets (around 4:18 PM today in Seattle)

The weather gods have heard your cries and has provided deliverance, and as their close follower and scribe, let me tell you what they have done for you.

To begin, the solar radiation during the past week (November 29-December 5) has been the greatest on record for several stations (although admittedly the records are only a decade or two long for this parameter).

For example, at Seattle, the WSU AgWeather site (in the field below the UW) enjoyed more sun in this period than any other (see below), with a hefty daily average of 5.03 Megajoules per square meter (Mega=million, Joule is a unit of energy.  Some years have had HALF as much! 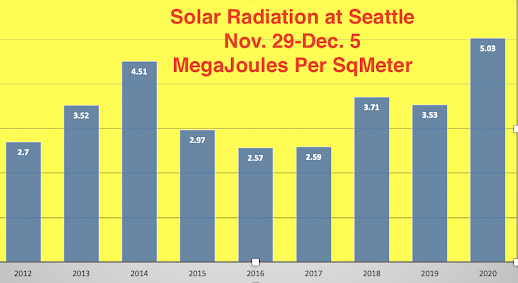 The plot of solar radiation on top of the UW Atmospheric Building  for the last three days is enough to make one smile, with the last two days being almost perfect cosines (meaning full radiation), reaching about 6.3 megajoules the last two days.  No wonder some students were sunbathing on the UW quad!

The sun was also associated with unusual warmth leading to a number of daily high temperature records being broken, such as:

Here is a plot of the some of the high temperatures yesterday around the region (click on figure to enlarge).  60F or more at several sites and even lower 60s south of the Olympics.  61F on the coast. 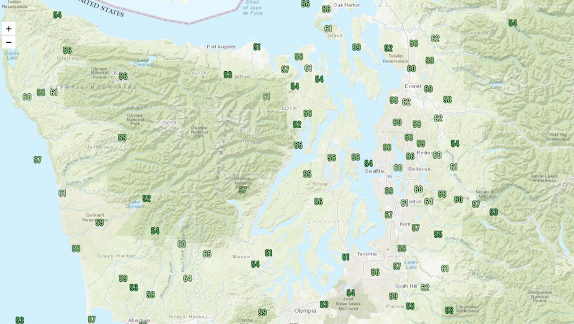 Looking at the temperatures in Seattle for the past two weeks compared to normal (below), shows we have exceeding the normal highs (purple lines) day after day, in some cases by 5-10F.

And the first 5 days of December was one of the driest on record!

The satellite imagery at 1 PM for the past two days shows the generally clear skies west of the Cascade crest and over high terrain.   The only persistent cloudiness is found in the lower elevations of the Columbia Basin.  Such low clouds are the price they pay for the heat and sun of the warm half of the year.   Weather gods obviously think this is reasonable and so should you. 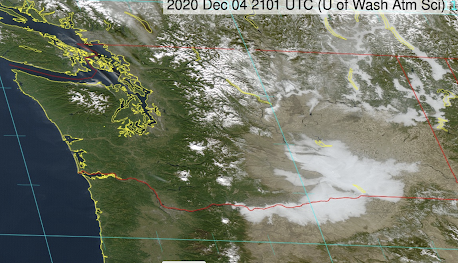 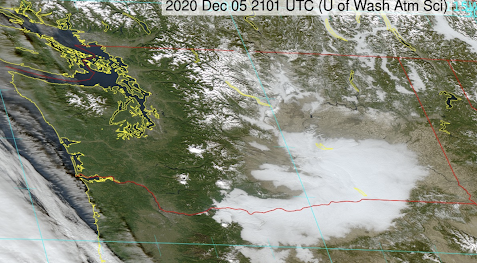 So why have we enjoyed this sunny, warm bounty?

Because their has been a very persistent and strong upper-level ridge of high pressure over our region.    Such ridges produce sinking motion that evaporate clouds and warms the atmosphere above us.

To illustrate,  here is a map of the ANOMALY (difference from normal) of the heights of the 500 hPa pressure surface (about 18,000 ft above sea level) for the past week.  Yellow and red mean higher than normal (anomalous ridging).  We have a nice ridge feature center centered over Washington! 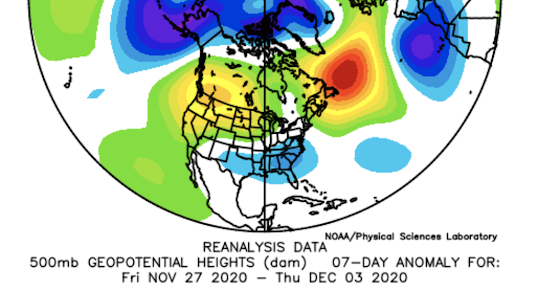 But wait! It is even better than that!  The upper level high is associated with high sea level pressure over eastern Washington (see sea level pressure map for yesterday afternoon below).  Large difference in pressure across the Cascades that produced powerful EASTERLY (from the east) winds above the surface.  As air descended the Cascades and Olympics, it warmed more by compression and prevented the development of fog and low clouds (which can happen with high pressure overhead) 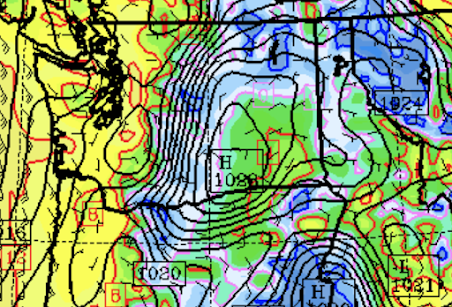 Surely, the weather gods have thought of everything

Now the weather gods are worried that Northwest folks were spoiled by all the sun and warmth, so they brought a weak front through last night. And the models suggest some rainy periods this week.  But today will be mainly dry as will tomorrow for most of the region. 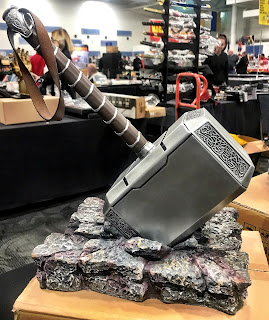 I have one of these in my office.