Big Environment is striving mightily to convince us the catastrophic failure of wind energy in Texas during the Cold Wave of 2021 was trivial or even a good thing. Really. It is a clever, sophisticated effort to deflect from the significant role wind energy had in the crisis.

In order to understand the public relations blitz, please consider this analogy:

Suppose you had an unreliable car that only started two days in winter. You would hate it.

But, suppose a shady organization wanted to sell more of those unreliable cars. They would say, “We only expected the car to start one day a week in winter. The fact it started two days is great. Twice as good as we thought!”

Less important than whether a certain generation source is running at any given point is whether the grid managers expect it to be running.

We’ve seen this “expectation” argument over and over. But, let’s look at wind’s true performance. Below the arrow is the graph of Monday’s Texas wind data direct from the Texas’ power manager, a non-profit known as ERCOT. For simplicity, we’ll use the word “units” to describe the electrical output of wind energy. If all of the possible wind turbines in Texas (the #1 state for wind energy) were turning and contributing to the grid, the top of the graph would be at 30,000 units.

This graph of wind energy, which came straight from ERCOT and is reproduced full-sized below, actually starts at 6,500 units. The actual wind energy is the green line which begins at 5,500 units. As Monday progresses, wind power drops down to just 600 units as of 7pm — just when temperatures are falling dangerously. That represents 2.3% of wind power’s potential.

It is absolutely true that natural gas had and has major problems during the cold wave. I’ve read a number of places that it was only providing power at 65% of capacity. No question: that is bad! But, 65% for natural gas is about 25 times better than the 2.3% for wind.

Note the subtle phrasing in the above: “wind only comprises 25% of the state’s energy mix this time of year.” When the politicians and Big Environment were extolling the virtues of wind energy, did they tell us it was a part time investment?

We are talking about the vital electricity that pumps water, powers hospitals, and keeps the lights and heat on. Had wind been performing merely at the “expectation” level (which, during extreme cold weather is below the 25% mentioned above), an additional 600,000 homes and businesses would have had power. Consider this tweet from a Texan this morning. 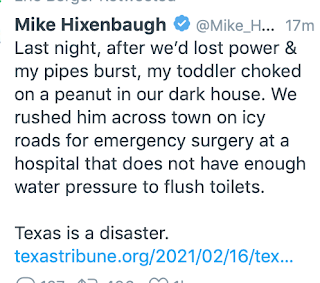 As of right now the Dallas Morning News is reporting the situation could improve to rotating outages but there is not even an estimate as to when the crisis will be over.

It may well be true, as some are contending, the wind turbines in Texas had the “wrong kind” of turbine blades. However, I also saw helicopter video from the Midland area (west Texas) showing multiple turbines leaking oil, so it seems likely the type of blade is not the entire issue.

Here’s the bottom line: if the entire investment in wind energy in Texas had been put into natural gas and nuclear — even with their issues during the Cold Wave of 2021 — it is likely this crisis would have been mitigated or would not have occurred at all.

As promised, full-sized graph of Monday’s wind output in Texas. The green line is the actual output. The blue line is what they were “expecting” Monday and the brown line is the “expectation” for Tuesday. 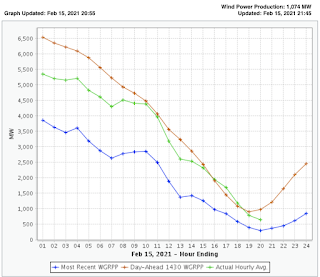