Here we go again, this time it is Southern Living with inaccurate, lazy reporting about storms. 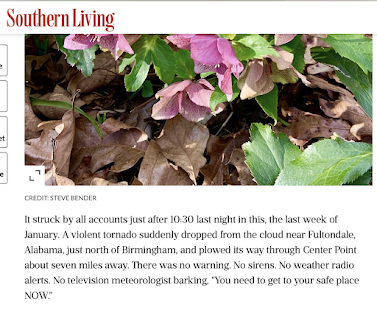 Except there was. Seven minutes’ worth. Sirens going off. Weather radios going off. WEA activated smartphones and weather apps going off. You can see for yourself in the video below.

Yesterday, we talked about the NBC Today Show getting this topic wrong. Now it is Southern Living. Every journalist in the U.S. seems to have a “function” key set up for the phrase, “there was no warning” on their laptop which they depress after every damaging tornado without even doing rudimentary research to learn if it is true.

We meteorologists have enough of a challenge getting everyone to shelter during dangerous tornadoes without the mainstream media inaccurately telling everyone “there was no warning” even when the warning was excellent as it was Monday night.

The author is a Southern Living contributor named Steve Bender, a/k/a the “Grumpy Gardner.” I did some checking and he says he lives in Birmingham. I have a hypothesis: if he wasn’t in the path of the tornado the warning system did not activate for his location. So, if I am correct, he lazily assumed it didn’t activate anywhere. We don’t want to activate the warning system outside of the areas directly threatened. Otherwise, it creates false alarms that kill credibility.

The media in the United States is a disgrace. I wish I knew how to fix it.