There is something about the western side of the Olympic Peninsula that brings big trees down.

In 2018, a swath of old-growth trees fell near Lake Quinault from an intense mountain-wave rotor circulation, something described in a paper I wrote with some UW graduate students.  There were some we didn’t convince, including repeated claims of UFOs and military intervention.

And on Saturday morning, around 4:45 AM, a weak tornado brought trees down along the Moclips Highway, between Moclips and Lake Quinault (see picture taken by the Quinault  Assistant Fire Chief).

This event occurred when a very strong narrow cold frontal rainband made landfall on the coast.  And we have a very good view of the action because of the National Weather Service Langley Hill radar, which was installed in 2011.

Below is radar image at 3:19 AM on October 10th.  Precipitation intensity is shown by the colors, with red indicating very, very heavy rain.  You notice the wavy line of red colors?  THAT is a narrow cold frontal rainband—where the frontal properties are super concentrated with heavy rain, high winds, sharp wind direction changes, and extreme turbulence.  Really nasty.

By 4:38 AM, this line of intense precipitation and weather contrasts has just made landfall, with heavy precipitation just inland from the coast.

The strong upward motion with the heavy convection along the line, coupled with strong wind shear, resulted in the formation of a weak tornado, probably at EF-0 or EF-1 levels (the National Weather Service will undoubtedly send out a team to determine this).

The Langley Hill radar is a Doppler radar, so it can see rotation, and in fact, there was some indication of rotating airflow with some of the convection.  Below is a image from the wonderful Radarscope app (provided by the NWS twitter feed) for 4:38 AM.

The top image shows reflectivity at the lowest radar level, which provides a measure of the precipitation intensity.  You can see an area of heavy precipitation (reds again).

But look at the second image that shows the velocity of the airflow towards or away from the radar.  Do you see there is an area of great color contrast between white/light red and green?  Green means air is approaching and red means going away.  That contrast of colors suggests rotation.  Weak, but suggestive.

The preliminary evaluation of my NWS colleagues (see below) is that the event was an EF-1 tornado with a peak wind of 90 mph and a path even of .5 miles. 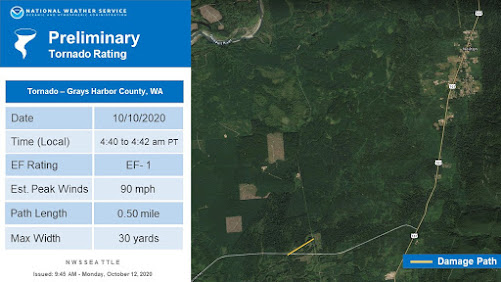 And as long as we are talking about winds, we should all batten down the hatches for tomorrow.

A relatively strong Pacific cyclone will make landfall north of us, as illustrated by sea level pressure forecast for 8 AM tomorrow morning. 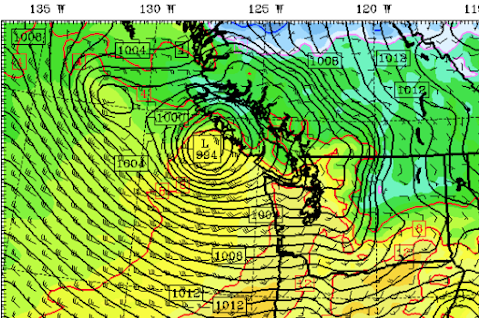 The latest Seattle WindWatch forecasts for tomorrow over Seattle shows strong winds tomorrow afternoon and evening, with max gusts reaching 40 mph somewhere in the city.  We had a few trees down and power outages over the weekend– I expect more tomorrow. 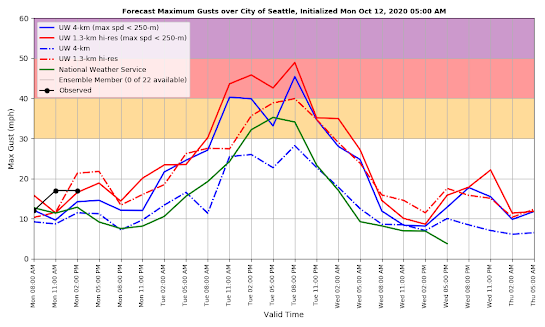 What is the correct answer? Genuinely cannot figure it out.

What is the correct answer? Genuinely cannot figure it out.