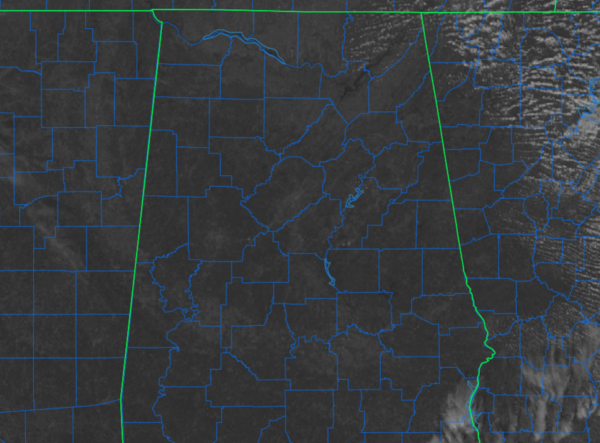 12 PM SAT/TEMP CHECK: What an incredible start to the new year across Central Alabama as nearly everyone is enjoying total sunshine except for the eastern half of Barbour County where clouds continue to move out of the area. It is already mild outdoors as temperatures are ranging from the mid 60s to the lower 70s. Demopolis has already made it up to 73º. Cullman was the cool spot at 66º. Birmingham was at 68º.

THIS AFTERNOON: We can expect sunny skies across the area with above average temperatures for the start of the year. Afternoon highs will top out in the upper 60s to the mid 70s. Winds will be light out of the southwest averaging around 5 mph.

THIS EVENING & OVERNIGHT: Clouds will be on the increase this evening and tonight, and some patchy fog may develop in some locations. And for the western parts of the area mainly west of a line from Jasper to Tuscaloosa to Demopolis, there will be a very small chance of a stray shower or two. Overnight lows will be in the 50s.

MONDAY’S WEATHER: As a cold front will be approaching the area on Monday, moisture levels will begin to rise and scattered showers will be possible mainly along and west of I-59 through much of the day, before rain chances move into the eastern parts. Severe weather and heavy rain will not be a factor, but an umbrella will be handy to keep with you. Highs in the upper 60s to the mid 70s. 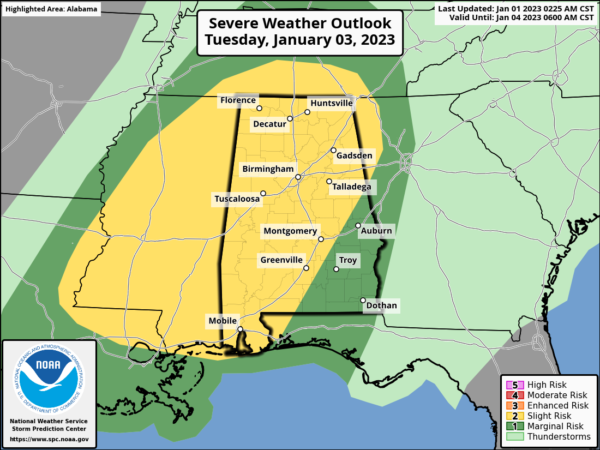 SEVERE THREAT ON TUESDAY: The Storm Prediction Center has a Slight Risk up for all the Tennessee Valley, and for locations in Central Alabama north of a line from roughly Roanoke (Randolph Co.) to Shorter (Macon Co.) to Grady (Montgomery Co.). The rest of Central Alabama is in a Marginal Risk. Strong to severe thunderstorms are possible across the area on Tuesday afternoon into Tuesday night, and the strongest storms could produce damaging wind gusts, large hail, or even a few tornadoes. Along with that, periods of heavy rain are possible Tuesday into Wednesday morning, which could result in some localized flooding issues. Highs in the upper 60s to the mid 70s.

High-resolution models are not completely in on this system yet, so we’ll have another update later this evening, and Spann will have an update in his weather briefing videos starting on Monday morning.

NEXT WEEKEND: Saturday will be another day with plenty of sunshine and slightly warmer temperatures, as highs will be in the mid 50s to the lower 60s. A weak disturbance will be moving into our direction on Sunday that may squeeze out a few showers over the extreme north and northwestern parts of the area, but the rest of Central Alabama will have partly sunny skies. Highs in the mid 50s to the mid 60s.