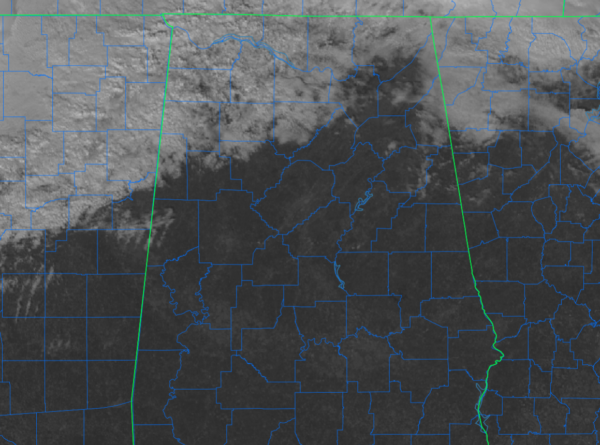 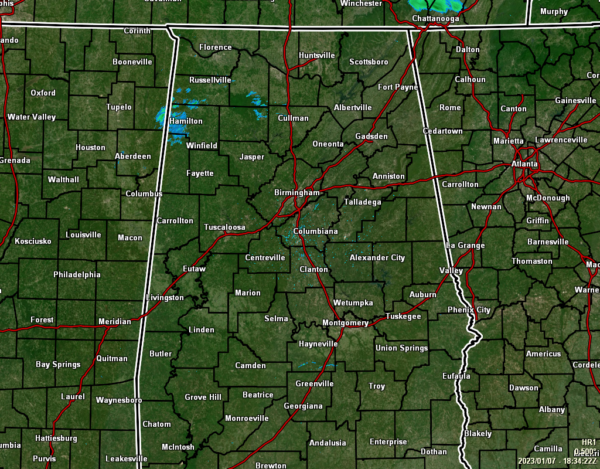 RADAR & SAT CHECK: As of 12:40 pm, satellite is showing clouds moving across the northern portions of Central Alabama and over the Tennessee Valley, and under those clouds, there may be a few light raindrops reaching the surface over in portions of Marion, Lamar, Winston, and Lawrence counties. The rest of the area has sunny skies and nice temperatures. As of the 12 pm roundup, we were seeing upper 50s to the upper 60s across the area. Several locations were tied as the warm spots at 68 degrees, while the cool spot was Gadsden at 57 degrees. Birmingham was at 65 degrees.

REST OF TODAY & TONIGHT: While a few light showers will be possible over that northwestern corner of Central Alabama (mainly north of a line from Fayette to Cullman), the rest of Central Alabama will have mostly sunny skies for a good while longer, until those clouds start to move farther into the area. Highs will be in the lower 60s to the lower 70s. For tonight, a cold front will begin to move into the area and rain will be likely along and north of I-59 while rain chances considerably drop off south of that. Locations along and south of a line from Selma to Alexander City will be dry. Lows in the upper 30s to the lower 50s.

SUNDAY’S WEATHER: Rain will continue across much of Central Alabama throughout the daylight hours on Sunday, with the highest concentration of activity staying along and north of a line from Selma to Clanton to Anniston. South of that, rain will be less likely, and I wouldn’t be surprised if a few locations in the extreme southeastern parts of the area (Pike, Barbour, and Russell counties) may even stay dry. There is no instability, so there will be no thunder. Highs in the upper 50s to the mid 60s.

MONDAY THROUGH WEDNESDAY: We’ll be dry on Monday as high pressure quickly moves in for a quick stay, with highs in the lower 50s to the lower 60s. A small disturbance will move across the area on Tuesday as a warm front moves northward. While nearly everyone will stay dry, a brief shower or two can’t be ruled out over the Tennessee Valley and the northern half of Central Alabama. Highs in the mid 50s to the lower 60s. Another quick visit of high pressure will keep us dry on Wednesday with mostly sunny skies and highs in the upper 50s to the upper 60s.

STRONG STORMS POSSIBLE ON THURSDAY: Both the European and GFS models are showing a dynamic system moving into and across the area on Thursday and into the pre-dawn hours on Friday morning. A strong low-level jet will be in place across the area, and with the better dynamics close by, we could see the potential for strong to severe storms during this event. Timing is a point of argument between the two models, as the Euro has the system moving into the area as early as the late morning hours, while the GFS delays it by roughly 9 hours. At this point we’ll say that storms will arrive during the latter part of the day, and we’ll have to watch the potential for strong to severe storms, maybe with the threat lasting into the late-night and overnight hours. Highs in the 60s throughout the area.

AT THE END OF THE FORECAST PERIOD ON FRIDAY: The Euro has the activity out of the area by daybreak on Friday, while the GFS has it hanging around through midday. Both solutions have a small chance of a few wrap-around showers on the backside as the system departs. It will be much cooler and breezy with highs in the 50s across the area.