**NO VIDEO THIS AFTERNOON AS WE CONTINUE ON A HOLIDAY SCHEDULE**

We continue to monitor the potential for severe weather threat across the area for late tonight and Friday morning. The frontal system is moving slower still, which means we have pushed the timing back just a bit more. The big question is instability in this high shear, low instability event, and it now appears that the best instability will be limited to areas south of US-80 from Demopolis to Montgomery to Phenix City. But there is still a low-end threat for the rest of North-Central Alabama as well. The main threat will be damaging winds, but with these types of events, there always seems to be a few spin-up tornadoes. Have multiple ways to receive warnings tonight. Make sure your Weatheradio is turned on before you retire for the night and that your devices are noton Do Not Disturb, 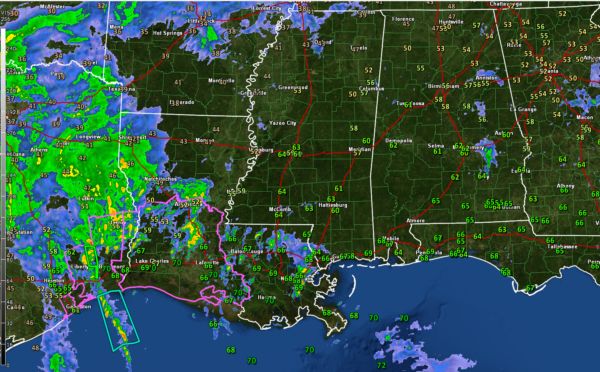 THIS AFTERNOON
A few light showers have been moving northeastward over Central Alabama over the past couple of hours, but they are only producing light rainfall amounts. A few showers are possible through the rest of the afternoon. Temperatures are in the 50s north to 60s south.

WATCHING THE WEATHER TO THE WEST
It has been a stormy morning in southeastern Texas as strong storms roll in off the Gulf of Mexico. A tornado watch is in effect for southwestern Louisiana. A strong mid-level cyclone is over the Rio Grande in southwest Texas, pushing northeastward into the Texas Hill Country around San Antonio and Austin. At the surface, low pressure is centered west of Houston. Strong jet stream winds will be developing this afternoon and spreading inland over Louisiana, Mississippi, and into Alabama tonight. A powerful low-level jet at about 5,000 feet will also develop, spreading, warm, moist air northward. These jet features will provide substantial speed shear. The upper-level feature will enhance instability as it rotates northeastward.

THIS EVENING (6PM – MIDNIGHT)
There will be a few light showers during the early evening hours across North and Central Alabama. Skies will be cloudy with an easterly wind becoming gusty at times. Storms will be lifting into southern Mississippi and Southwestern Alabama and we will be watching these as they start working their way into the southwestern parts of Central Alabama around 9-10 p.m. Rain and thunder will expand and start overspreading the rest of Central and North Alabama beginning around 10 p.m. Those pre-frontal storms could pose a severe weather threat, but mainly for places like Jackson, Thomasville, and Monroeville back to Mobile and Pensacola.

MIDNIGHT – 6AM
Widespread showers and storms will be impacting North and Central Alabama during these hours. The front will still be back in Mississippi. The best chances for severe weather will be along and south of US-80, with the main threat being damaging winds along with a few spin-up tornadoes. To the north, there is a marginal risk of severe storms north of US-80, with a lesser threat of damaging winds and an isolated spin-up tornado.

6AM – 9AM
The severe weather threat will be over west of I-65. We will be tracking a broken line of showers and storms along the front as it pushes eastward through Central Alabama. We will still have the possibility of a damaging wind gust or spin-up tornado until this line of storms passes.

9AM – NOON
Sunshine will start peeking out over western sections pretty quickly, but a few storms will be ongoing in the Auburn-Opelika areas of southeastern Central Alabama. Will be watching them to make sure they don’t go through a resurgence with the return of daytime heating. So we will have to mention a low-end severe threat for southeastern parts of the area during the late morning. The storms should be in to Georgia by 1-2 p.m.

FRIDAY AFTERNOON / NIGHT
Expect increasing sunshine and mild temperatures in the lower 70s. Overnight lows will be in the 40s under partly cloudy skies.

SATURDAY/SUNDAY
With the upper low rotating to our north on Saturday, there could be a few showers over North Alabama Saturday, Saturday night, and into early Sunday, perhaps as far south of Birmingham. The chance is small the further south you go. Highs will be in the 50s both days, a little cooler Sunday with northwesterly winds. Saturday night lows will be in the middle and upper 30s.

ON THIS DATE IN 1967
The fabled Ice Bowl NFL Playoff game took place in –13 degree conditions at Lambeau Field in Green Bay. Packer fans endured the sub-zero conditions to root for their beloved team against the Dallas Cowboys. Bart Starr carried the ball into the endzone in the final seconds to pull out a 17-13 victory for the Packers. The Packers are accustomed to the cold, even viewing the extreme conditions to be an advantage. In fact, they never lost a home playoff game until Michael Vick and the Falcons dismantled that record on January 4, 2003.