A place whether the temperature can be 80F at noon and 15F by midnight.

A state where a phenomenon called the Blue Norther can produce extreme winds with rapid temperature declines.

And the impacts of these rapid temperature falls can be larger than some hurricanes:  in fact, the effects of this month’s cold wave will probably end up being more costly than Hurricane Harvey–both in terms of property damage and loss of life. 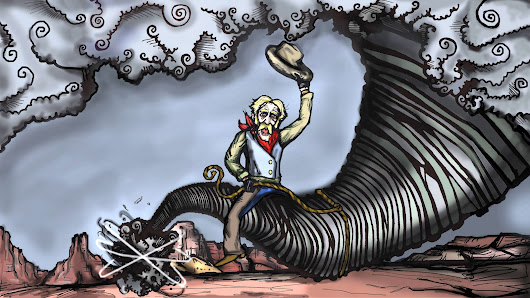 Texans Have A Reputation for Thinking They Can Deal with Anything Mother Nature Throws at Them!

Image by Maroonbeard under a Creative Common’s Licence

Consider the case Austin, Texas, a city that not a few Northwesteners are thinking of moving to.  Below is a figure that shows the observed highs and lows (black bars), as well as the normal temperature range (green band) and the record highs and lows for February.

In the beginning of the month, temperatures were above normal, with some days offering highs around 80F.   But then around Feb. 10th, the bottom dropped out, with lows getting to 6F on Feb. 16tth.  And later in the month, they were above normal again.  Texans have to be a tough breed to deal with these changes!

Look closely at the record highs and lows.  Record highs are in the 80s in the early part of the month and around 100F by the 21st, while record lows are in the single digits to the teens.  And it is not unusual to gyrate between the two quickly.

The rapid transition from summer warmth to Arctic cold is not usual in Texas–so frequent that they have a name for it, the Blue Norther.   Sometimes called the Texas Norther.

One of the great Blue Northers occurred on November 11, 1911, where temperatures dropped as much as 70F in less than a day.  The map below, centered over Oklahoma and northern Texas, shows the highs on Nov. 11th and lows on Nov.12th.  Unbelievable. 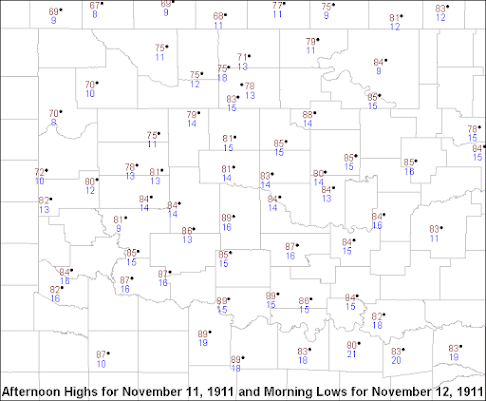 Such very large temperature declines have been noted as long as Texas has been occupied and is certainly not a new phenomenon.  Texas cold waves are not the result of the “global weirding” that is so popular in the press but a natural part of Texas weather.

But why, you ask does Texas weather, particularly in the winter, have such rapid and severe gyrations?

It is all about geography…and the absolutely unique geography of U.S. Great Plains.

Take a look at this terrain map.  Texas has the broad and high Rockies to its east, which isolates Texas from the temperate/mild effects of the Pacific (which we in the Northwest enjoy in spades). But it is open to the Arctic…. a clear shot from cold air moving south. 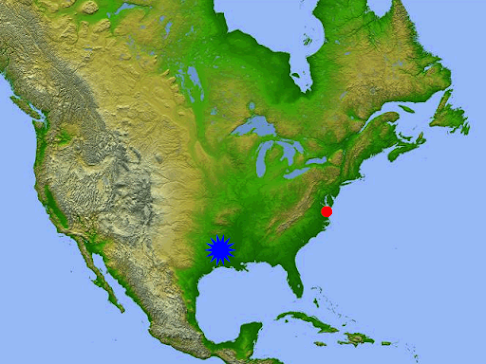 And Texas is also very close to the warm Gulf of Mexico and is at a relatively southern laitude (thus, plenty of strong sun).

So if the flow is from the south (from the warm Gulf) or from the southwest (northern Mexico, with compressional warming as well), Texas can be toasty, even during the winter.  80s to 90s are not unusual from November to February.

But then if an Arctic air mass forms to the north, and then pushes southward over the plains, Texas can get primo polar air, backed by strong northerly winds.

No other place in the northern hemisphere is so uniquely endowed for such gyrations between summer-like heat and Arctic cold during the winter.

And it is obvious that in building the infrastructure of Texas–from power generation, to transportation, to water storage and transport— there must be a consideration of the potential, if not thea certainty, of big temperature swings. 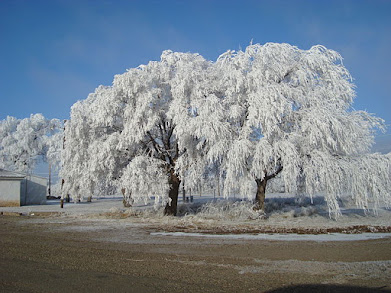 Picture by Texugo at wts Wikivoyage through a Creative Commons license

If I was the Seattle Chamber of Commerce, I would be doing some clipping of Texas newspaper headlines: