The models did a horrible job with this storm, but wait till you see what may be in our future…

Take a look below at how much snow the European model is predicting in the next 10 days in the Northeastern United States. This is truly incredible. Image courtesy WeatherBell Analytics. Click on the image to enlarge. 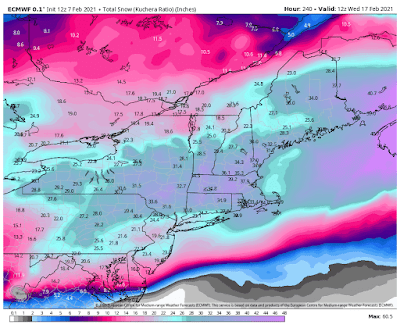 The models in general did a horrible job with this storm.  The best was probably the short-range American model, but it varied tremendously from run to run, going from extremely heavy snow to very little snow, then trended back towards heavy. The rest of the models were showing less snow than what we got. Hence, my rather ridiculous forecasting with this storm. But in the end, the truth is that snowfall amounts in our area ranged from as little as just over an inch, to over 8 inches, so you can imagine the difficulty.

The snow will end from west to east this afternoon and evening with total snowfall accumulations ranging from 1-8 inches throughout our area. Highs will be in the low to mid 30’s.

Tomorrow will be mostly sunny with highs in the 20’s.

Wednesday will be variably cloudy with highs in the mid 20’s to mid 30’s.

Friday there will be a chance of snow ending in the morning, followed by clearing. Highs will be in the low to mid 30’s.

Next Tuesday, February 16th, through next Thursday, February 18th, there will be a chance of snow as a stationary front may develop near our area, with disturbances riding along the front. Highs will be in the mid 20’s to mid 30’s.

Next Friday, February 19th and next Saturday, February 20th, are then looking nice with highs in the upper 20’s to mid 30’s.