BIG TIME COLD: Temperatures across North Alabama are in the 4-14 degree range early this morning, with wind chills as low as -15F. Mobile is now below freezing, and in Dothan temperatures are falling fast. Lingering snow flurries will end soon, and today will be mostly sunny and windy with temperatures remaining well below freezing over the northern 3/4 of the state. Communities north of Birmingham won’t get out of the teens, and the wind chill index will remain below zero through much of the day.

Tonight will be clear, and the wind will slowly die down. By daybreak tomorrow, lows will range from 2 to 12 over the northern half of the state. The weekend will be dry but very cold; the high tomorrow will be in the 20s over North Alabama, with low 30s Sunday. For some places, they will be below freezing for over 72 consecutive hours. We should note the low early Christmas morning will be in the teens for most communities, with single digits again for colder spots.

NEXT WEEK: Most of the week will be dry with a warming trend. An “Alberta clipper” type feature will bring some risk of snow flurries to Tennessee Monday/Monday night, but for now it looks like the air will be too dry in Alabama for any significant precipitation. By the end of the week afternoon temperatures will be in the 60s as the big pattern flip unfolds.

Rain and possible thunderstorms will likely return to the state at some point over the New Year’s weekend, but it is too early to be specific about the amount of rain or timing… See the daily Weather Briefing video for maps, graphics, and more details. 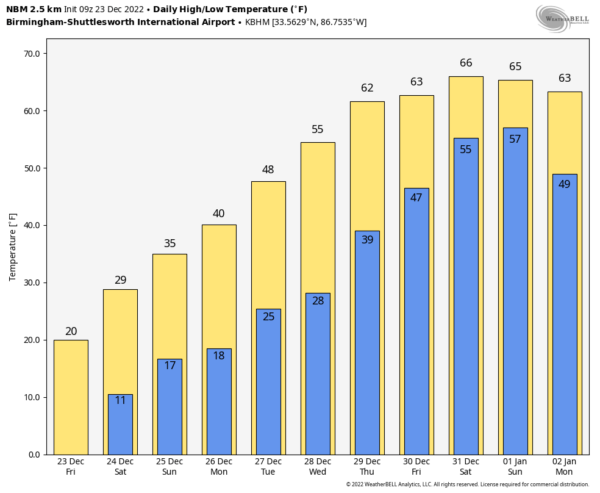 ON THIS DATE IN 1921: An estimated F3 tornado struck the town of Clarkedale, Arkansas, killing six and injuring 60 others. Four people died in the destruction of the Banks and Danner store, where 50 people were doing their Christmas shopping.

ON THIS DATE IN 1998: A major ice storm struck central and southeast Virginia and much of North Carolina beginning on Wednesday, December 23, and lasting until Christmas Day morning. Icy conditions caused injuries from slips and falls and numerous vehicle accidents. Ice accumulations of up to an inch brought down trees and power lines. Outages were so widespread with 400,000 customers were without power on Christmas Eve.

We are on a holiday schedule, so just one weather briefing video today, but I will post fresh forecast notes here on the blog later this afternoon. Enjoy they and stay warm!