If you felt that the weather during the past week in our region has been the best you have ever experienced during mid-spring, with blue skies and perfect temperatures, you are not wrong.

In fact, we broke a new April record at Seattle Tacoma Airport:  the longest run of days reaching 70F or higher during April. 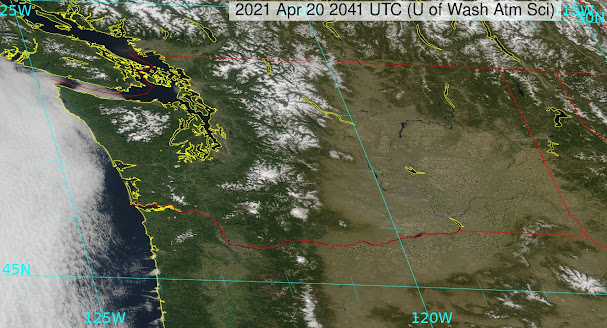 The graph of observed Seattle temperatures versus normal highs (purple) and lows (cyan) are shown below, with 70F highlighted with the blue dashed line. We went from cooler than normal before April 12th to the extraordinarily warm period of the past six days, with highs roughly 20F about normal for this time of the year.  July temperatures in April.  And no precipitation for the past week as well.

The regional picture is similar.  For the past week (actually April 12-18th) temperatures have been warmer than normal over the entire state and particularly along the coast (9-15F above normal), where easterly winds kept the cool ocean air at bay. 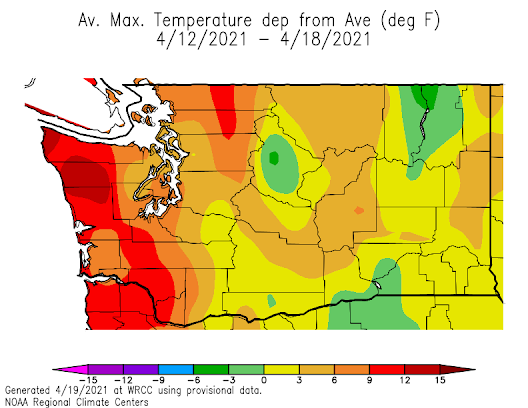 And the state was drier than normal during the past week, particularly along the western slopes of the Cascades and Olympics, with downslope flow associated with easterly winds and high pressure aloft being primary causes. 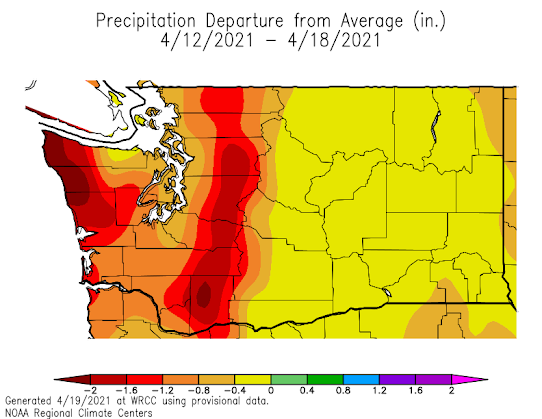 If you are a gardener like me you watch the soil temperatures, thinking about putting in those tomatoes or warmer season seeds.   Well, there is good news on that front, with a large increase in soil temperatures (8 inches down) in Seattle (see below)  from roughly 50 to 57F

Temperatures also zoomed up in eastern Washington, as illustrated from the situation at Moses Lake, where soil went from about 51 to 60F.

Tomorrow will be very nice but I have some ill news to tell you.  It won’t last.  Clouds and rain are in our future, with a cool, wet weekend ahead.