Yesterday’s post focused on the “people aspect” of the violent tornadoes of 30 years ago today. This posting focuses on nascent science of the early 1990’s that comprised the building blocks of today’s highly-successful tornado warning system.

Scientist Christian Doppler discovered the “Doppler effect” in 1842 which meant — among other things — that winds could be measured by radar. That had been a dream of meteorologists during much of the 20th Century.

Early Success in Wichita in 1958 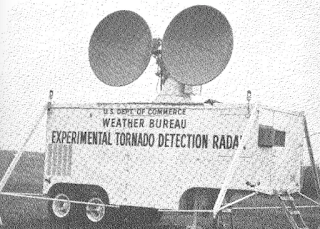 In 1957 and ’58, the Weather Bureau installed an experimental Doppler radar at Wichita’s (now) Eisenhower National Airport. The second year, on June 10, the radar measured 200+ mph winds associated with the El Dorado, Kansas, Tornado. The hypothesis had been proven: Doppler radar could detect tornadoes. However, that was highly impractical for anything but an experiment.

It wasn’t until the last 1970’s that technology had advanced to where operational Doppler became practical. My story in yesterday’s Wichita Eagle discussed the political aspects of deploying Doppler, embodied in a program called NEXRAD. Today is the anniversary of the first tornadoes detected with modern Doppler radar. 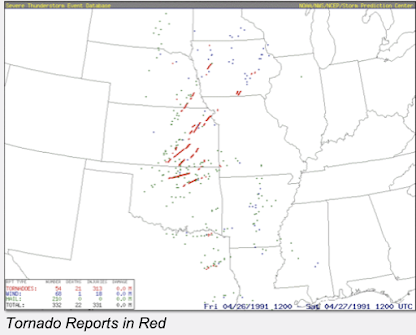 This was a fierce tornado outbreak that extended from Iowa to Texas. Because the most severe tornadoes occurred in southern Kansas and northern Oklahoma, we will focus on those tornadoes.

The map above is a plot of surface weather features at 4pm and the 250 mb jet stream at 6pm. The numerals are the intensity and approximate locations of tornadoes. As would be expected the most intense tornadoes occurred in the area of maximum difluence ahead of the dry line. 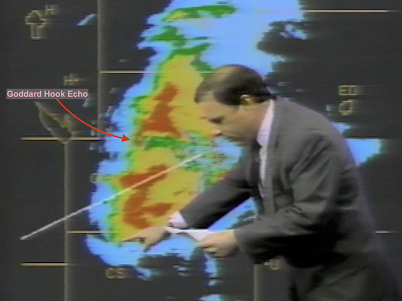 I’m pointing to the developing hook echo associated with the developing Wichita-Andover Tornado north of Conway Springs (CS). I had just been handed a report of a funnel cloud north of that town. There was already a tornado on the ground over Goddard, Kansas, that was moving east northeast. 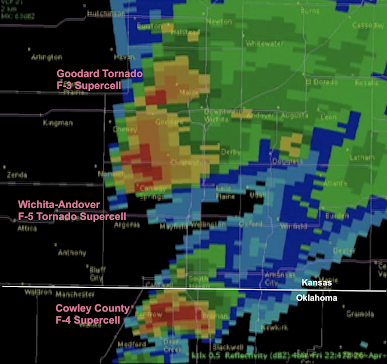 The storms (above) were moving northeast. Because these storms were so distant from the radar, the prototype’s resolution was poor. But, these were the first tornado thunderstorms ever shown on modern Doppler radar.

A wider view of the NEXRAD: 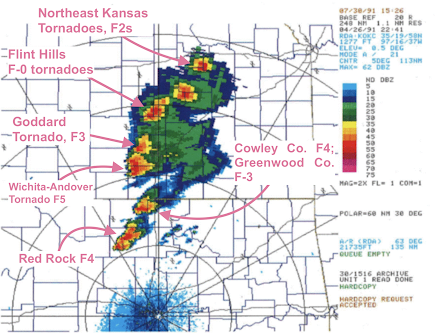 This gives you an idea of how incredibly taxing it was to broadcast the warnings for all of these! There were no automatic TV “crawl” devices — everything had to be done verbally and by pointing a maps. 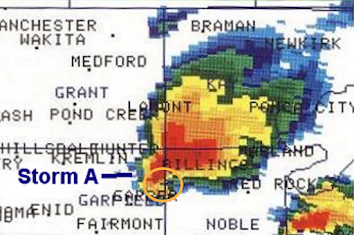 To the south of the three major Kansas tornado, a large supercell produced the F-4 intensity Red Rock (Oklahoma) tornado, here getting ready to cross I-35 about a mile south of the Dairy Queen at the Billings exit. The computer algorithm flashed a gold circle (reproduced here) that blinked when it found rotation. NEXRAD worked! It took just five days to prove itself. 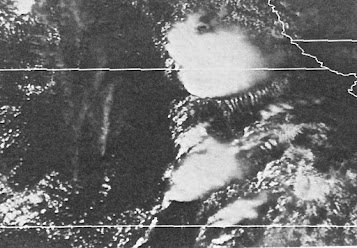 If I recall correctly, the April 26th outbreak was the first, or one of the first, times the GOES imager was run on five minute intervals. While I was too busy to look at the satellites (it would have been useful, I wish I had) the data collected on this date is referenced in several scientific papers.

How about….none? There were no automatic “crawl” devices or other technology to display the warnings. We had an unlisted number for our trained storm spotters. Reports from the NWS came from the NOAA Weather Wire. The weather squadron at McConnell AFB (which was severely damaged by the tornado) issued “SA” reports (prior to METARs) every few minutes as the storm approached (even today I remember the T/Td was 81°/69°). Those came over “Service A” and had to be read off paper.  Everything had to be done pretty much as you see in the video below.

Plus, we had to cover a Wichita radio station. The workload was enormous when trying to cover three major tornadoes in the immediate area, severe thunderstorms to the north (but still in our viewing area) and a line of thunderstorms that formed on the cold front and produced a second tornado warning for the Wichita area along with large hail, high winds and lightning that disrupted the search and rescue effort. It was hours of coverage with no dinner, no restroom breaks and hardly time to breathe.