HOT, DRY WEATHER: A large upper high will keep Alabama’s weather hot and dry through mid-week with mostly sunny days and fair nights. Afternoon temperatures will reach the mid 90s tomorrow through Thursday, about ten degrees above average for this time of the year, and not too far from record levels. Then, a cold front will pass through (most likely in dry fashion) late Thursday, followed by a noticeably cooler day Friday. Friday’s high will be close to 80 degrees with a fresh north breeze and lower humidity. Some places across North Alabama will dip into the 50s early Friday morning.

THE ALABAMA WEEKEND: Much of North/Central Alabama will be in the 50s early Saturday morning for a nice “fall feel”… the day Saturday will be sunny with a high in the mid 80s. Then, on Sunday, we will bring in a chance of showers by late afternoon, and into Sunday night, as another cold front passes through. Rain amounts won’t be too heavy, but it will be the first decent chance of rain in a couple of weeks. Look for a mix of sun and clouds Sunday with a high in the mid 80s.

NEXT WEEK: Showers end very early Monday, followed by a clearing sky. Some parts of North Alabama could hold in the 70s all day Monday behind the front. Then, the rest of the week looks generally dry with highs in the 80s. See the daily Weather Briefing video for maps, graphics, and more details. 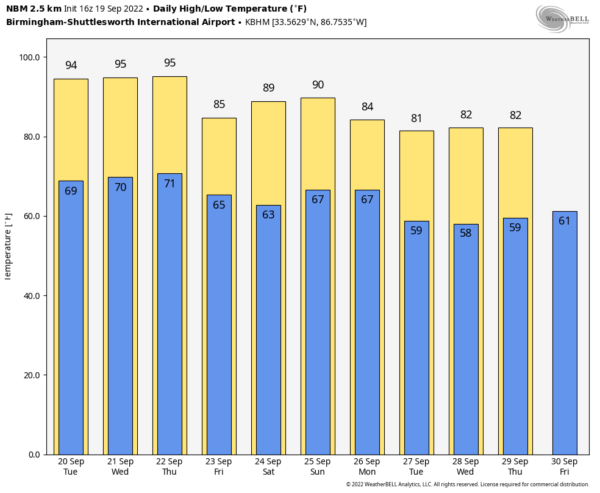 TROPICS: Hurricane Fiona, with winds of 90 mph, is now about 165 miles southeast of Grand Turk Island. It is expected to become a major, category three hurricane by Wednesday east of the Bahamas, and the latest NHC forecast track has it very near Bermuda early Friday morning.

Heavy rains from Fiona will continue to produce life-threatening and catastrophic flooding along with mudslides and landslides across Puerto Rico through tonight. Life-threatening flash and urban flooding is likely for eastern portions of the Dominican Republic through early Tuesday. 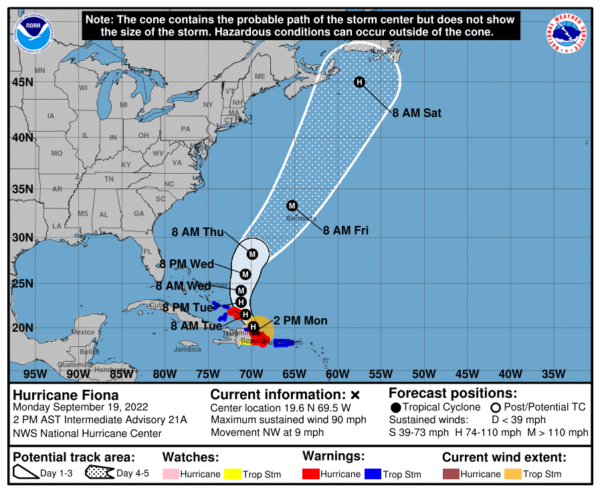 NHC is monitoring two other tropical waves in the Atlantic, but for now both have only a low chance of development over the next five days. 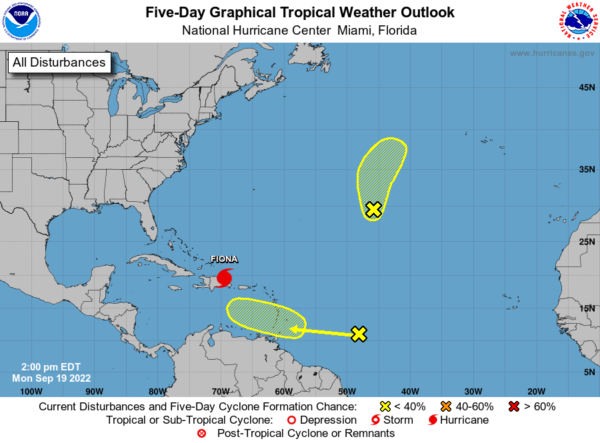 ON THIS DATE IN 1947: A hurricane made landfall near the Chandeleur Islands, LA on this day. Wind gusts of 112 mph and a central pressure of 967 mb were measured at Moisant International Airport. A storm surge of 9.8 feet reached Shell Beach, Lake Borgne. Moisant Airport field was flooded by two ft. of water while Jefferson Parish was flooded to depths of 3.28 ft. New Orleans suffered $100 million in damages. Total loss of life was 51 people. As a result of this storm, hurricane protection levees were built along the south shore of Lake Pontchartrain to protect Orleans and Jefferson Parishes from future storm surges.