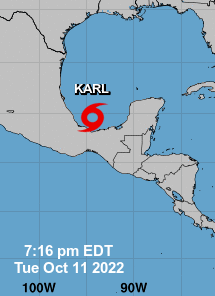 I did say we should get surprise pop ups!

Didn’t quite expect it so fast! 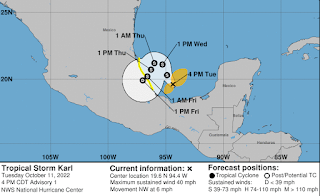 This is the forecast, if it holds. 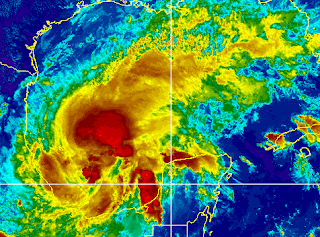 That’s a large mass of convection. 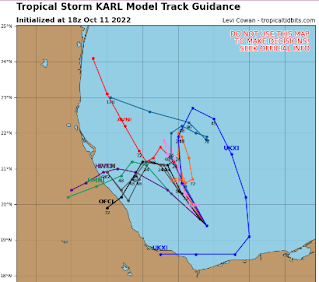 Not much to say here except a bit annoyed. I did want to talk a bit about the possibility of some part of the energy from Julia possibly moving to the North that cradled in the Bay of Campeche storms could come together rapidly if a high pressure is aloft. But the NHC was fairly clear they did not expect that to happen and Julia was going West; there’s still a yellow X in the EPAC from what should be her remains. It is fairly common when you have a large gyre which there had been in the SW Carib and a storm moving into it that parts of the energy do get into the BOC and spin up. I wasn’t here the last few days to see the verbage put out and I don’t like to argue with the NHC’s discussion unless I feel there’s an obvious concern. That is why I talked on surprise pop up systems and figured I’d see what it looked like tonight. Tonight, two nights later, it’s Karl!

Anyway, currently, the intensity forecasts keep this as a low end Tropical Storm.  Some models do try and go in different directions but most (but not all) curve it back again towards the West. I’ll update tomorrow and we will see what we see. There had been a purple splotch (as I like to call it) on the map shown below on Sunday but purple splotches are often ignored. It shouldn’t have been. 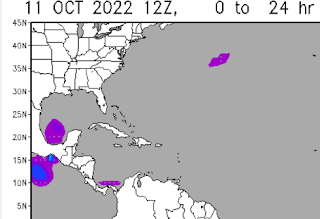 Ignore the purple lips in the Atlantic.

Note something should form in the EPAC…

The map below shows the potential.

But it shows the stronger Karl in BOC 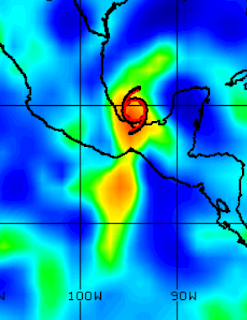 Not sure what went on while I was offline, not sure if it was treated as a different system totally but it’s obviously a piece of energy from what was Julia, this really happens often.  At least a part didn’t come back to life as Mitch did and move over Florida, a real win there! And, I know that no one wants to think about more tropical storms or hurricanes after Ian as everyone is still reeling with the death and destruction it caused but reality is reality and there are always realistic chances something can form and sometimes it does (as happened with Karl) and sometimes it doesn’t as you can see below as EPAC still has low chances of development from bits and pieces of Julia.

What I will say, lastly is we are in “front” season and fronts are moving across the land. The most common way for anyone to have a landfalling system currently is by way of a front pulling a system up into Gulf of Mexico or Florida. Sometimes something slides up along the E coast but with fronts actively moving the chance for that is less and less unless something changes.

Have a good night.

Ps the holiday in Raleigh was awesome beautiful. Nicest weather I’ve seen in forever. Blue skies setting a backdrop for Poplar trees that turned yellow, orange and gold leaves falling randomly. The dogwood are reddish with little berries, so beautiful. Bright sunshine and cool temperatures. Nice meals in the sukkoth and good talks with people and well … Fall is awesome when it’s like this vs gray days where fronts hang and hover over Raleigh which is what also often happens. So, it’s good to be appreciative when you get a nice surprise and the weather is beautiful!

One of Grandma Mary’s favorite songs.