ANOTHER DELIGHTFUL DAY: With a clear sky temperatures are in the 42-52 degree range across most of Alabama early this morning… look for a high around 80 degrees this afternoon with sunshine in full supply. Tomorrow will be warm and dry… the sky will be partly to mostly sunny with a high in the low 80s.

THE ALABAMA WEEKEND: Moisture levels will rise, and we will mention some risk of widely scattered showers Saturday, mostly during the afternoon and evening hours. But it won’t rain everywhere, and there will be a decent amount of sun with a high in the low to mid 80s. Scattered showers and storms will be more numerous Sunday, mainly over the northern half of the state, as a weakening cold front nears the northwest corner of Alabama. This won’t be a “wash-out”, all day kind of rain, but no doubt it will rain a time or two over the north/central counties. Some thunder is possible, but no severe storms are expected. The day Sunday will feature more clouds than sun, and the high will be in the low 80s in most communities.

NEXT WEEK: We will maintain some risk of showers Monday through Wednesday as a moist airmass will stay in place, but the showers will be pretty widely spaced, and there will be intervals of sun each day. Showers and storms will become more likely and numerous Thursday as another cold front approaches. Highs through the week will be in the 80s, with lows in the 60s. See the Weather Xtreme video for maps, graphics, and more details. 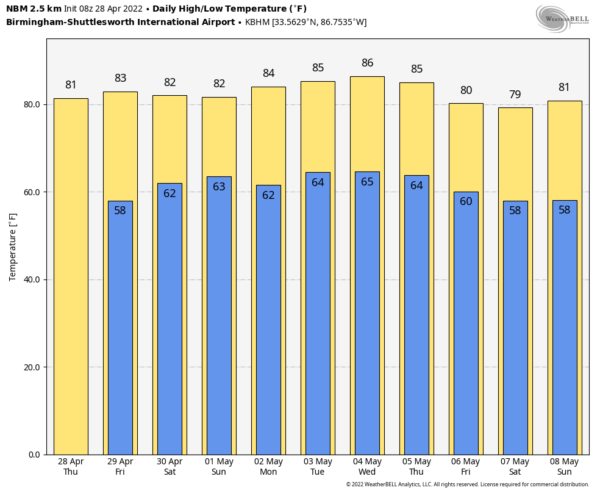 ON THIS DATE IN 2014: A total of 18 tornadoes touched down across Alabama, including three rated EF-3. One of the stronger tornadoes moved through parts of Russell and Lee counties in East Alabama, where 13 people were injured south of Opelika. An EF-1 moved through the southern part of Tuscaloosa, and four tornadoes impacted Jefferson County and the Birmingham metro, including Bessemer, Adamsville/Graysville, Kimberly, and North Johns. Five people were injured by an EF-2 tornado near Ethelsville in Pickens County.

ON THIS DATE IN 2002: During the evening hours, a violent F4 tornado carved a 64-mile path across southeast Maryland. The La Plata, Maryland tornado was part of a larger severe weather outbreak that began in the mid-Mississippi Valley early on that day and spread across portions of the Ohio Valley and the Mid-Atlantic States. In Maryland, three deaths and 122 injuries were a direct result of the storm.