Happy Valentine’s Day! A two-pronged winter storm is going to affect Alabama over the next 48 hours. There is high confidence that there will be impacts, but low confidence in the exact amounts of ice and sleet and snow. Let’s dig into the details.

THE CAUSE: A strengthening trough of low pressure is building over the western United States. An anchoring high is off the southeastern coast of the U.S. In between, a deep, moist southwesterly flow extends over the southern United States. Disturbances will pass through the trough over the next 48 hours, producing two waves of precipitation that will affect Alabama. The first wave will arrive Sunday night into Monday morning. The second will follow quickly on the heels of the first, arriving late Monday morning through late Monday night. A shallow Arctic airmass has edged into the Southeast. The stationary front lies over North Florida with freezing temperatures down into Northwest Alabama.

TO THE WEST: Snow has commenced from Colorado and New Mexico through Kansas, Oklahoma, and northwestern Texas. Sleet is breaking out over northeastern Texas. Snow and freezing rain will spread across the rest of Oklahoma, northeastern Texas, Arkansas, western Tennessee, and northwestern Alabama today and tonight and on into the Ohio Valley. Winter storm warnings cover ALL of Oklahoma and Arkansas, and 80% of Texas, as well as northern Louisiana, western Tennessee, and much of Mississippi.

Travel is strongly discouraged in the warning areas, and may become a problem in the watch area, which could be upgraded later.

TONIGHT: Near the surface, temperatures will fall to near or below freezing early Sunday evening for areas across Northwest Alabama, including parts of Lamar, Marion, and Winston counties where a Winter Weather Advisory will go into effect at 6 p.m. Sunday, and Lauderdale, Colbert, Franklin, Limestone, and Lawrence counties where a Winter Storm Watch will commence at the same time. In these areas, the precipitation will fall as freezing rain Sunday night. Lows Sunday night will be in the upper 20s to near freezing in the advisory and watch areas, with upper 30s near I-59, and lower 40s to the southeast when the precipitation will fall as all rain. The precip will end by Monday morning.

SECOND WAVE: The second wave of precipitation will follow quickly Monday morning. Freezing rain will commence over western Alabama counties between 9 a.m. and noon. It will increase during the afternoon with periods of freezing rain and sleet. To the south, a cold rain will fall in the I-59 corridor and points southeast. It will be a close call for snow in the northwestern corner of the state, with freezing rain and snow mixed around the Shoals.

MONDAY WINTER STORM WATCH: A Winter Watch will also go into effect for these counties in the NWS Birmingham warning area at 6 a.m. Monday: Marion, Lamar, Winston, Fayette, Walker, Pickens, Tuscaloosa, Sumter, and Greene. The North Alabama counties will still be in a Winter Storm Watch all of Monday with Madison, Morgan, and Cullman Counties coming into the Watch starting at 3 p.m. Monday. Ice accumulations will range from 1/10 of an inch to three-tenths of an inch in the Winter Storm Watch areas before the precipitation moves out late Monday night. There could be up to three inches of snow and sleet over Northwest Alabama.

ICE IS NEVER GOOD: Of course, any ice accumulations can cause travel issues, and accumulations of one-tenth of an inch or greater can cause significant travel problems. Accumulations of greater than one-quarter of an inch can start causing significant tree damage and power outages. This will be in the case in the Winter Storm Watch areas. Here is the probability areas in Alabama and eastern Mississippi will see 0.10 inches of ice, which is the threshold for serious issues: 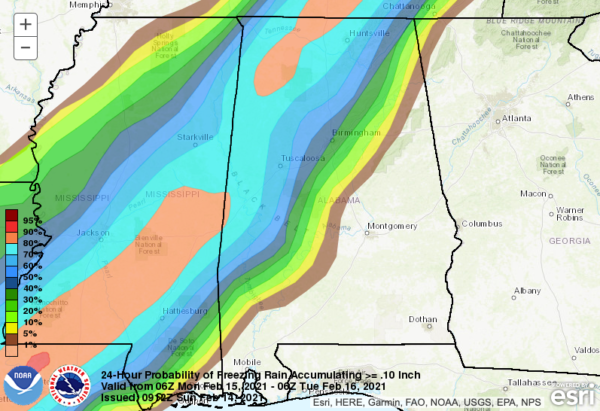 BITTER COLD TO FOLLOW: Highs Monday will be in the lower and middle 30s over Northwest Alabama, with readings in the lower 40s close to I-59, and 50s to the southeast. Colder air will spill in from the west Monday night, with lows in the teens and lower 20s for areas northwest of I-59, and middle and upper 20s southeast of there. Winds will become gusty out of the northwest Monday afternoon and night, reaching 20 mph at times, making it even more miserable. Wind chills could reach 10-20F over Central Alabama with readings between 0-10F.

TUESDAY: Tuesday will get off to a cold and cloudy start with slow clearing during the day. Winds will gust to 20 mph at times, slowly diminishing Tuesday afternoon. HIghs will remain in the 30s northwest of I-59, with lower 40s to the southeast. Tuesday night will be even colder with lows in the 18-22 range over Northwest Alabama, with lower and middle 20s south to I-59, and middle and upper 20s southeast of there.

WEDNESDAY: Wednesday will feature a sunny start, but increasing clouds during the day. Highs will be in the upper 40s over the Northwest, with lower 50s near I-59, and upper 50s to the southeast. Rain will move in from the south after dark, with mostly rain across the state. There will be some mixed precipitation over the extreme Northwest, around the Shoals. Wednesday highs will be in the middle and upper 40s Northwest, with lower and middle 50s across Central Alabama. Wednesday night lows will be near freezing again over the extreme Northwest, with middle and upper 30s across the rest of Central Alabama. We will be watching closely in case temperature profiles change.

STORMS THURSDAY: The precipitation will continue into Thursday, and again will be mostly rain over the northwestern half of Alabama. There will be storms to the southeast of the track of the low-pressure center. Some of the storms could end up being strong over Southeast and East Central Alabama, southeast of I-59. It will be breezy again with winds gusting to 20 mph at times. Highs will range from the upper 30s Northwest to near 50F along I-59, to 60s to the southeast.

FRIDAY INTO THE WEEKEND: Friday will be cloudy and colder with a few snow flurries over Northwest Alabama. Highs will range from the upper 30s Northwest to lower 40s across Central Alabama. Again, winds will be gusty at times. High pressure build in for the weekend, with lows in the 20s and highs in the 50s. Sunday will be mostly dry, but a few showers will show up Sunday night as a disturbance passes by to the north of us. We will start off in the 30s and reach near 60 degrees by afternoon.

VOODOO LAND: In the Voodoo Department, it looks like a cold front will bring a few showers by Tuesday the 23rd. A stronger system will bring rain and storms on Friday the 26th. Those storms could be strong. Colder weather will follow for the weekend.

WEATHERBRAINS: This week, the panel will entertain Dr. Kathy Sherman-Morris and Chris Nunley. They will be talking about their study into the Dunning-Kruger Effect, which says that people often estimate their knowledge about a subject and it affects their response in situations. Check out the show at www.WeatherBrains.com. You can also subscribe on iTunes. You can watch the show live at live.bigbrainsmedia.com or on James’ YouTube Channel You will be able to see the show on the James Spann 24×7 weather channel on cable or directly over the air on the dot 2 feed.

ON THIS DATE IN 1899: A blizzard dubbed the “Storm King” culminated the week of intense cold that had engulfed the eastern half of the country. The Storm King spread a wide swath of snow from Florida to Maine. New York City already had 11 inches of snow on the ground when the snow began on February 13th. New York City picked up 15.6 inches of snow as the Storm King held sway. The heavy snowfall was accompanied by temperatures near zero. Follow my weather history tweets on Twitter. I am @wxhistorian at Twitter.com.