The threat for severe weather on Monday and Wednesday of this week highlight this weather forecast package. The details are a little uncertain still, but it is a good time to think about what you and your family will do if a warning is issued for your location. We will examine the threat and try to resolve as many of the details as possible…

BUT FIRST, DID YOU SPRING FORWARD? Daylight Saving Time began officially at 2 a.m. local time this morning. We all lost an hour of sleep as our clocks were advanced one hour. If you neglected to do it, you’re probably late this morning.

TODAY WILL BE ALSO: Temperatures today will be quite similar to those of yesterday. We ‘e starting off in the middle 50s this morning and will be heading toward highs near 80F over the Tennessee valley, and in the lower 80s over the rest of Central Alabama. The record high for Birmingham for today is 84F. Skies will be mostly sunny through much of the day, with clouds increasing by late afternoon. Skies tonight will become mostly cloudy, with lows around 60F. A few showers will break out after midnight and will continue into the morning hours on Monday.

FOR YOUR MONDAY: By Monday morning, weakening low pressure will be moving into Missouri, with a weirdly tilted trough rotating around an upper low over Nebraska. Warmth, moisture, and instability will spread into western Alabama ahead of a cold front during the morning and early afternoon. The strongest upper-level winds will be lifting out to the northeast though by that time. But there could be a narrow window of time during the late morning when storms could become severe over northwestern Alabama. The main threat will occur west of a line from Livingston to Tuscaloosa to Cullman to Huntsville. The activity should weaken through the afternoon hours as the front stalls. There could be a few showers overnight, with lows near 60F.

TUESDAY: The front will be coming back north as a warm front on Tuesday, and there will be showers and storms again, mainly during the afternoon hours. Severe weather is not expected, but we will be monitoring for any strong storms. Highs will be in the middle 70s. Lows will be in the lower 60s. 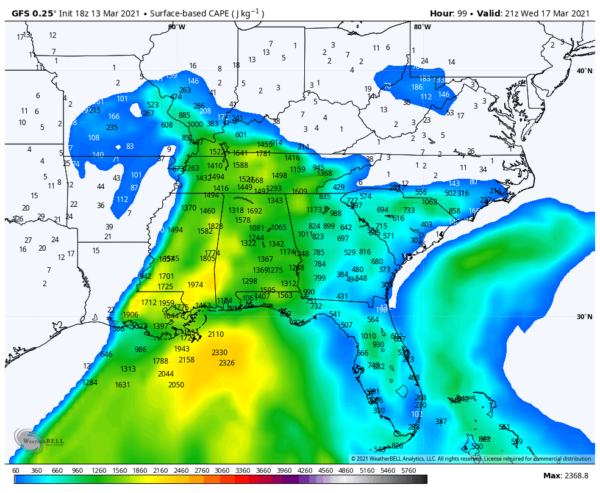 SIGNIFICANT SEVERE WEATHER THREAT WEDNESDAY: By Wednesday morning, a warm, moist airmass will be in place across Alabama, with temperatures warming through the 60s into the middle 70s, and dewpoints climbing to the middle 60s. Southernly winds will increase to 10-20 mph with higher gusts. A cold front will approach the Mississippi River by noon, with the surface low moving out of Missouri into the Ohio Valley. A line of showers and storms will push into West Alabama by mid-afternoon, and progress across the state during the late afternoon and evening, exiting into Georgia by midnight. With instability values between 1,500-2,000 joules/kg, storms will develop strong updrafts. Bulk speed shear values will be sufficient (50-60 knots) for these updrafts ad storms to become organized, and upper air patterns will be favorable for them to become severe. Low-level shear values will become favorable for the formation of tornadoes by mid to late afternoon as well. There are lots of details to be worked out about the threat in terms of timing and severity, but for now, almost all of Alabama is in the threat area.

THURSDAY: There could be a few showers into Thursday morning, but skies will clear to some extent fairly quickly. Clouds will thicken again though as wraparound moisture works its way back into the state. There could even be a few showers Thursday night. Highs on Thursday will be in the middle 60s.

ANOTHER SEVERE THREAT: It looks like we will deal with strong storms again on Wednesday the 24th. But early progs do not show as much instability. We will see.

BEACHCAST: Dense fog is the story this morning along the beautiful beaches of Alabama and Northwest Florida, with Dense Fog Advisories in effect. That fog will burn off later this morning, making way for a gorgeous day. Expect increasing sunshine with highs in the middle 70s after morning lows in the 50s. Showers will be in the picture each day Monday through Wednesday, with a chance of thunderstorms each day. Rain and storms will be likely on Wednesday, ending by early Thursday and settings the stage for a nice weekend. Weekend highs will be approaching 70 degrees with lows in the 40s. There will be a high risk for rip currents through Wednesday. The surf height will reach 4 feet by midweek. Water temperatures have warmed into the lower 60s.

NATIONALLY: An outbreak of tornadoes occurred across the Texas Panhandle into western Oklahoma yesterday afternoon and evening as supercell storms developed along the dryline. A significant tornado apparently occurred in Randall County, Texas.

DANCING WITH THE STATS: It was 52F at Central Park in New York City yesterday, establishing a new record high for the date. The old record was 50F. It was 52F at LaGuardia and 53F at Newark.

WEATHER BAND: The American Meteorological Society has created a club for all of us! The weather enthusiasts of the world! You will connect with weather enthusiasts and experts alike. Special Weather Band items will identify you with the community. You’ll get special discounts on WeatherWise magazine and other merchandise as well as a special newsletter! Join today! https://amsweatherband.org/index.cfm/weatherband/membership/

ADVERTISE WITH US: Deliver your message to a highly engaged audience by advertising on the AlabamaWX.com website. The site enjoyed over 20 MILLION page views in the past 12 months. Don’t miss out! This is peak severe weather season. We can customize a creative, flexible, and affordable package that will suit your organization’s needs. Contact me, Bill Murray, at (205) 687-0782, and let’s talk.

WEATHERBRAINS: This week, the panel will look back at the January 25th Fultondale Tornado and explore how businesses and organizations should structure their tornado plans. Check out the show at www.WeatherBrains.com. You can also subscribe on iTunes. You can watch the show live at live.bigbrainsmedia.com or on James’ YouTube Channel You will be able to see the show on the James Spann 24×7 weather channel on cable or directly over the air on the dot 2 feed.

ON THIS DATE IN 2008: A tornado struck downtown Atlanta while the SEC Basketball Tournament was being played. The tornado damaged the Georgia Dome, blew windows out of downtown hotels, and collapsed several buildings. Several homes and buildings were destroyed in the historic Cabbagetown district. SEC officials decided not to play the Saturday and Sunday games in the dome, mainly out of concern that tens of thousands of spectators would hinder rescue and clean up operations in the damaged areas and also because of fears that additional storms the following day would be severe again. One person was killed in the tornado in a collapsed building. Follow my weather history tweets on Twitter. I am @wxhistorian at Twitter.com.