Today is an infamous day in Alabama and U.S. Weather History. For Alabamians who were alive then, it Is their most memorable weather event. For me, it was the last night that I ever feared the weather. I was determined from that point forward to understand these terrifying storms. That’s my challenge for you if you are like I was: learn about them and prepare. History has shown that we have a big generational tornado outbreak about every 40 years in Alabama, and it was been over ten years since the last, but that doesn’t mean another couldn’t happen before then. No signs of that this week, but we will deal with severe weather in the mid-week time frame.

IS THERE SEVERE WEATHER IN OUR FUTURE: Yes. The threat will come on Monday night, Tuesday, and Wednesday across parts of Alabama from two different systems.

BUT FIRST: We will dig into that in a moment. But what can you expect today? Something pretty nice. We’re starting off in the 40s across the area, which is right near normal for this time of the year. Northern locations will top out in the 60s today, with lower and middle 70s across Central Alabama. Low tonight will be in the 40s again.

MONDAY: Good looking day for Monday with highs topping out in the upper 70s under partly cloudy skies. Clouds will be increasing overnight and we will be watching for rain chances to increase as a surface low tracks to our northwest. Severe weather is a threat to our west Monday night and could limp into West Alabama early Tuesday morning with a northward moving warm front.

TUESDAY: Rain and storms should be widespread across Alabama on Tuesday as the warm front lifts slowly northward. Severe weather is possible with this activity. Damaging winds and an isolated tornado are possible.

WEDNESDAY: A cold front will approach Alabama bringing more showers and storms to the area. Once again, severe weather will be possible with this system. We will have to get a little closer to the event to see how it stacks up. But be ready for damaging winds and tornadoes. 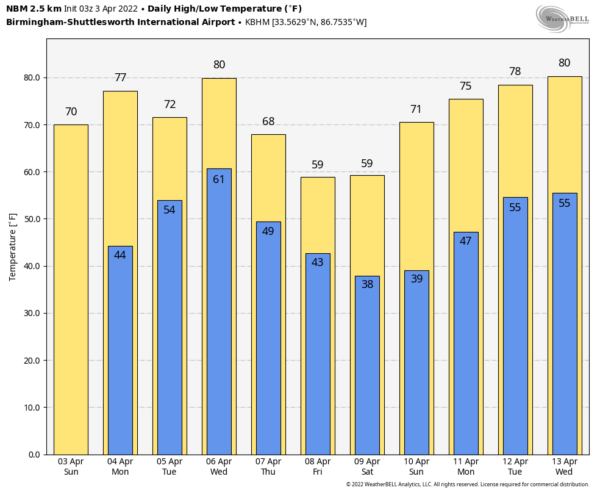 CHANGE TO COLDER: The cold front will be through here by Thursday and it will turn much cooler. Look for highs in the 60s Thursday, with 40s Friday morning. But as an anomalous upper low sinks south out of the Ohio Valley, temperatures will be running some 20-25 degrees below normal across the Southeast. This means 30s for North and parts of Central Alabama Saturday morning. Same for Sunday morning. Be ready for the potential for some frost or freezing conditions.

BEACHCAST: A nice week along the beautiful beaches of Alabama and Northwest Florida, with mild conditions in the forecast. Expect rain and storms Monday night into Tuesday continuing through Wednesday. Things cool down a bit after Thursday.

WEATHERBRAINS: Working on the guest for Monday night with a late schedule change. More later. Check out the show at www.WeatherBrains.com. You can also subscribe on iTunes. You can watch the show live at live.bigbrainsmedia.com or on James’ YouTube Channel You will be able to see the show on the James Spann 24×7 weather channel on cable or directly over the air on the dot 2 feed.

ON THIS DATE IN 1987: Surprise snow in the South! North-Central and NE Alabama were under a heavy blanket of snow. Birmingham picked up seven inches of heavy, wet snow. Nine inches was reported in Northeast Alabama. Meridian MS had two inches and one inch fell at Jackson MS, both records for the latest snow at those locations. Mobile AL had a trace of the white stuff. The snow fell after the trees were in full leaf and azaleas and dogwood were in full blossom. It became known as the “dogwood” snowstorm. Numerous tree branches were broken off from the weight. Follow my weather history tweets on Twitter. I am @wxhistorian at Twitter.com.