We turn the page on the old calendar on the wall to May today. More about the weather during the typical May in just a moment, but you’re going to get to experience a fairly typical May week this coming week.

SATURDAY was a warm and humid day across Alabama with scattered showers and storms coming up from the Gulf. High temperatures were in the 80s, about where they will be for the foreseeable future. Some of the storms were strong with small hail and gusty winds, but severe weather was not an issue. Late day storms to the west of Alabama limped into the state from the northwest toward morning, and the line of storms was but a sliver of its former self back in Arkansas. Overnight lows this morning are in the upper 50s and lower 60s.

RACE DAY: For the second Sunday in a row it is race day here in the state as the green flag drops on the Honda Indy Grand Prix of Alabama at the beautiful Barber Motorsports Park in Leeds. The event is sold out today, and spectators and crews may have to wait out the morning rain and storms. It will be warm and humid again, with highs in the lower and middle 80s. There could be a few strong storms with hail and gusty winds, and an isolated severe storm can’t be ruled out. So stay weather aware if you will be outdoors at Barber or on one of our area lakes, rivers, trails, stadiums, or golf courses. And of course, one of the fun places will be Protective Stadium, where the USFL is playing all of its regular-season games. If you haven’t been, it is a great brand of football, and a little bit of nostalgia for the old USFL of the 80s. Expect a few showers and storms this evening over the northern third of Alabama. But will make some noise, but shouldn’t be severe. Lows will be in the 60s.

NEW WORK WEEK: Today’s shower and thunderstorm activity will be enhanced by an approaching cold front that will stall just to the northwest of the area. That front should be drawn back northward on Monday by an approaching upper-level disturbance. More showers and storms will be possible, especially Monday afternoon.

RINSE AND REPEAT: The rest of the week will feature variations of the same theme. A sluggish frontal system to the northwest and occasional perturbations in the pressure field will lead to scattered showers and thunderstorms.

WEEKEND SNEAK PEEK: It’s more of the same into the Friday through Sunday time frame, with partly cloudy, warm, and humid conditions and daily helpings of showers and storms. 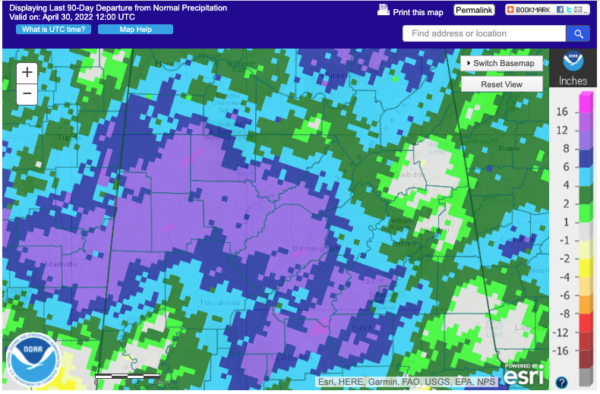 WET 2022: We have had no shortage of rainfall across North and Central Alabama this year, and this week’s activity may help to pad those rainfall surpluses. Rainfall amounts for the week could approach 2-3 inches and be even heavier in spots.

VOODOO COUNTRY: Out toward the end of the forecast period, in the 8-15 day time frame, it looks like even more wet weather ahead for Alabama and parts of the Deep South. This could lead to even more excessive rainfall. I fear that we may deal with some flooding problems eventually. While it is great not to be worrying about drought, too much of a good thing could turn out to be a bad thing, as it can be known to do.

THE MERRY MONTH OF MAY: I promised you a little climatology for the fifth month of the year. The fifth month of the year is one of my favorites in Central Alabama. We see some of the finest weather of the year, with runs of fine, warm and sunshine-filled? days. It reminds me a lot of October, its closest cousin, but generally warmer and somewhat stormier. The average percentage of possible sunshine is 66 percent, equal to October, which is the other sunniest month of the year. The average high and low for the month in Birmingham is 81.5F and 59.7F respectively. At the start of the month, the average high is 78F, but it rises to 85F by the end of the month. Overnight lows really warm, rising from 55F on May 1st to 64F on the 31st. The coldest May reading ever in the Magic City is 36F on May 4, 1971. The warmest reading ever in May was 99F on May 28, 1962, and May 29, 1898. It generally reaches 90F or warmer 1.9 days in the month. Heating degree days are nearly zero in May, but cooling degree days start to really rise as we head toward the unrelenting heat of summer. May used to be a drier month than April. Until 2003 that is. 5.71 inches of rain fell on the 7th that month, which skewed the average higher. The average May rainfall at the Birmingham Airport jumped from 4.4 inches to 4.99 inches because of that single event. A tremendous flash flooding event occurred across Central Alabama that day, with higher amounts reported just northeast of the Airport. 10.50 inches of rain fell on Edwards Lake Road and JB Elliott recorded 9.82 inches just northeast of Trussville. Not surprisingly, May 2003 went on to become the wettest fifth month with 17.22 inches of rain. The driest May on record occurred in 2000 when 0.88 inches fell. It usually rains on 9.1 days on average and rains more than 1 inch on 1.4 days. Thunderstorms occur on 9 days. The average dewpoint is starting to climb, rising from 49F in April to 58F in May.

BEACHCAST: Scattered mainly afternoon and evening showers and storms will be the norm over the next two weeks along the beautiful beaches of Alabama and Northwest Florida, with warm and humid conditions prevailing. Expect highs in the 80s and lows in the uppwer 60s to lower 70s. Water temperatures are climbing through the 70s, almost warm enough for me to get in! Rip currents will be a problem from time to time.

DANCING WITH THE STATS: Portland OR broke its April rainfall record as 5.73 inches of rain fell in the month, breaking the old record of 5.26 inches. Just last year, Portland established a record as the driest April ever there.

WEATHERBRAINS: This week, the panel will entertain Ryan Hall Y’all, The YouTube meteorologist has created lots of controversy and consternation for some, an adulation from many others, which has allowed him to monetize his over the top form of weather communication. Whether you are a fan or not, it will be interesting. Check out the show at www.WeatherBrains.com. You can also subscribe on iTunes. You can watch the show live at live.bigbrainsmedia.com or on James’ YouTube Channel You will be able to see the show on the James Spann 24×7 weather channel on cable or directly over the air on the dot 2 feed.

ON THIS DATE IN 1857: The Washington Evening Star published the first national weather roundup. Observations from 19 telegraph stations were collected by volunteers who were part of the Smithsonian Institution’s cooperative network. Follow my weather history tweets on Twitter. I am @wxhistorian at Twitter.com.