Saturday was a pretty typical summertime day across Alabama. Scattered showers and storms developed with the heat and humidity, and where they did form, there were some impressive downpours and plenty of lightning. But most areas remained dry, as they will again today, with highs once again topping out in the lower 90s forthe most part.

THE WEEK AHEAD: It’s kind of a rinse and repeat forecast but with some twists and turns toward the end of the week. Weak high pressure will continue ridging over Alabama and the Southeast, but a big, full latitude trough will form over the eastern third of the nation by midweek, allowing a cold front to actually sneak through Alabama by the weekend. This means scattered pop up showers and storms through Wednesday, but rain chances ramping up Thursday and Friday as that frton approaches. As the front slides into South Alabama for the weekend, those rain chances may just go back down a bit. 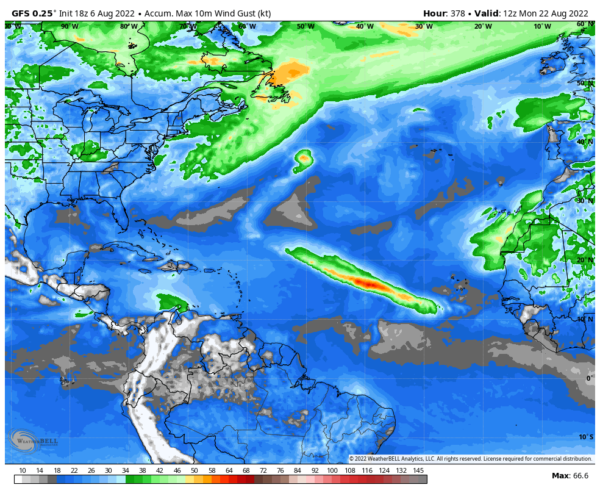 IN THE TROPICS: By this time in 2020 we were already to I on the list of Atlantic tropical cyclone names, and were at E last year. We are still holding pat on C for now in what is still expected to be a busy 2022 hurricane season. Nothing expected in the next five days, the standard time the National Hurricane Center outlooks are for. There is lots of dry air over the tropical Atlantic still, which tends to suppress development. But a strong tropical wave this week could moisten up the environment and begin to change things. Nothing on the two main global model either, although the European ensembles are starting to pick up on the idea of a tropical depression or tropical storm forming east of the Islands toward the end of the week, curving to the north of the Lesser Antilles and Greater Antilles. The NHC is certainly getting more bullish on the idea. The GFS thinks it may become a hurricane but recurves it east of the islands. We will keep watching…

BEACHCAST: WE have settled into that part of the summer along the beautiful beaches of Alabama and Northwest Florida where rain and storms are nearly a daily occurrence. Without them everything would just burn up. Water temperatures are in the middle 80s. Highs each day will be in the upper 80s to near 90F. Overnight lows will only drop to the upper 70s. Not much to worry about in the way of rip currents.

NATIONALLY: Heat in the West, heat in the Central, and heat in the northeastern parts of the United States are the main story. Lots of heat advisories and excessive heat warnings to go around.

DEATH VALLEY FLOODING: Furnace Creek in Death Valley only received about 0.11 inches of rain in August and 1.94 inches of rain in an entire year, but they picked up 1.46 inches on Friday. This caused severe flooding and trapped about 1,000 guests and employees of the National Park.

WEATHERBRAINS: This week, the panel will entertain an amazing group of people from the Lakeland Weather Club, a high school meteorology program from the 60s and 70s in New York. Some famous people came out of the club. It’s the kind of school you would have dreamed of going to if you were a weather nerd like me. Check out the show at www.WeatherBrains.com. You can also subscribe on iTunes. You can watch the show live at live.bigbrainsmedia.com or on James’ YouTube Channel You will be able to see the show on the James Spann 24×7 weather channel on cable or directly over the air on the dot 2 feed.

ON THIS DATE IN 1935: The 103F reading at Birmingham was a record for the date a s the city baked in a heat wave. It would be followed by a high of 104F on August 8th, which is just one degree short of the all-time record August high for the Magic City. Follow my weather history tweets on Twitter. I am @wxhistorian at Twitter.com.