Saturday was a dreary day across North and Central Alabama. Temperatures were generally in the 40s with cloudy and a light rain most of the day. A few places touched 50F before the rain began, like Birmingham. Some places picked up a mix of rain, sleet, and even some snow. The rain changed into snow over the northwestern quarter of the state. A dusting of snow has fallen in some spots, with up to an inch over some of the higher elevations of North Alabama, north of the Tennessee River including places in northern Madison County like Hazel Green and Meridianville. Temperatures this morning are near freezing over the Tennessee Valley, with middle and upper 30s over Central Alabama.

SUNDAY BRIGHTENING: Skies are starting out mostly cloudy across Alabama this morning, but sunshine should be in increasing supply as we go through the day. Temperatures will rise into the upper 40s over the Tennessee Valley, with lower and middle 50s across Central Alabama.

DRY START TO THE WEEK: Monday will be dry with mostly sunny and mild conditions. Highs will be near 60F generally with a breezy southeast wind. Monday night lows will be in the lower 40s North with middle and upper 40s over Central Alabama. A few showers may reach southern sections of Central Alabama by Monday night.

TUESDAY: Southeasterly surface winds will bring in plenty of warm, moist air on Tuesday and highs will be quite mild, reaching the middle 60s North to upper 60s to near 70F readings across Central Alabama.

MIDWEEK SYSTEM: A frontal system will settle into Alabama late Tuesday and early Wednesday where it will stall. There will be a few showers across the area on Wednesday. The mild conditions will continue with mild temperatures in the middle 60s after a morning start in the 40s.

RAIN INCREASES: As that frontal system lies across Central Alabama, a series of low-pressure systems will track across the state. This will increase rain chances across the entire state on Thursday. Highs will be near 60F.

FRIDAY AND THE WEEKEND: The front will drive south into Alabama, and low pressure will exit to the east. Rain will diminish and it will be colder, with highs mainly in the 40s. High pressure will build in by Saturday, and highs will be limited to the upper 30s and lower 40s. Sunday, the chill will continue, with highs in the 40s and morning lows in the 20s. We note that the GFS has us not getting above freezing on Sunday, indeed with highs in the teens! Hoping that is an outlier! 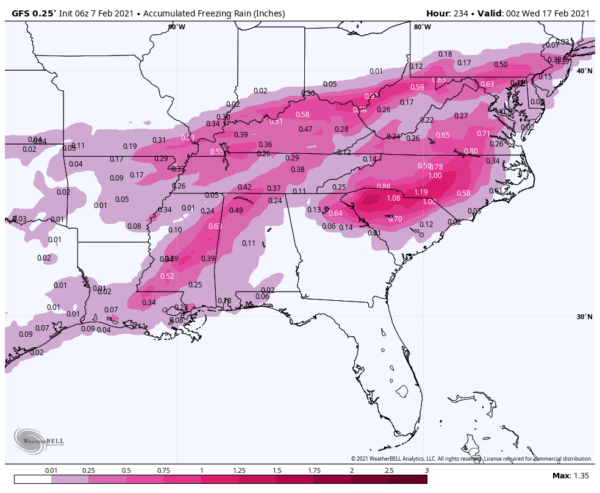 VOODOO TERRITORY: We will be watching the system that will be coming in around Monday night the 15th and Tuesday the 16th. Recent runs of the GFS have been persistently showing signals for a significant ice storm across parts of North and Central Alabama. But there is no way to forecast what will happen this far out. Stay tuned.

BEACHCAST: Clearing and dry conditions today along the beautiful beaches of Alabama and Northwest Florida. It will remain dry tomorrow. Rain returns on Tuesday and will be a factor in the forecast through Friday. It will be cool today, but warmer by tomorrow. 70s will prevail Tuesday, Wednesday, and Thursday. Things will turn cooler by Friday and Saturday. There is a high rip current risk through late Monday night. Water temperatures are in the middle 50s.

DANCING WITH THE STATS: Hastings and Grand Island, Nebraska both picked up 4.4 inches of snow yesterday, establishing a new record for the date.

ADVERTISE WITH US: Deliver your message to a highly engaged audience by advertising on the AlabamaWX.com website. The site enjoyed over 20 MILLION pageviews in the past 12 months. Don’t miss out! We can customize a creative, flexible, and affordable package that will suit your organization’s needs. Contact me, Bill Murray, at (205) 687-0782, and let’s talk.

WEATHERBRAINS: This week, the panel will entertain four outstanding social scientists, who have studied the high fatality rate from tornadoes in the Southeast. Check out the show at www.WeatherBrains.com. You can also subscribe on iTunes. You can watch the show live at live.bigbrainsmedia.com or on James’ YouTube Channel You will be able to see the show on the James Spann 24×7 weather channel on cable or directly over the air on the dot 2 feed.

ON THIS DATE IN 1999: Record warmth across the South. Birmingham tied its record high with 76 degrees, Huntsville shattered their old record high when the mercury reached 73 degrees, breaking the old record of 68. The morning low at Huntsville was 57, also establishing a record warm minimum for the date. Follow my weather history tweets on Twitter. I am @wxhistorian at Twitter.com.