Saturday was a mostly sunny and hot July day across Alabama. A couple of thunderstorms tried to form across the Birmingham Metro during the late afternoon, but they quickly died out. Highs across the area ranged from 88F at Alex City and Auburn to 95F at the Oakmulgee Forest Service observation site. The overnight was fair and calm, with lows in the lower 70s.

MORE SUMMERTIME HEAT TODAY: Skies will be mostly sunny to partly cloudy today with more heat and humidity. High temperatures will rise into the lower to middle 90s with almost no chance of rain. Heat index values will be between 94-99F.

RAIN CHANCES RAMP UP A BIT TO START THE WEEK: An upper-level disturbance will slide by to the north and east on Monday. This will allow a frontal system to push closer to Alabama from the north. The presence of the front will be enough of a spark to cause an increase in showers and storms on Monday and Tuesday. It looks like the best chances will be Monday night. Rainfall amounts could be around one-third of an inch on average. Highs Monday and Tuesday will be in the lower 90s.

MIDWEEK AND BEYOND: High pressure will ridge back in in the wake of the passing trough, keeping us mostly dry in the Wednesday through Friday time frame. Highs will gradually ratchet back up into the middle 90s and heat index values will climb to above 100F.

WEKEEND OUTLOOK: Very typical summertime weather will hold true through the weekend, with partly cloudy, hot, and humid conditions and widely scattered mainly afternoon and evening showers and storms. Highs will be in the middle 90s.

VOODOO TERRITORY: The second week of the forecast period looks hot and humid with widely scattered afternoon showers and storms. Highs will be in the middle 90s, lows in the lower 70s. There are signs a backdoor cold front may try to sidle our way from the east, which could concentrate those showers/storm chances, especially over eastern sections. 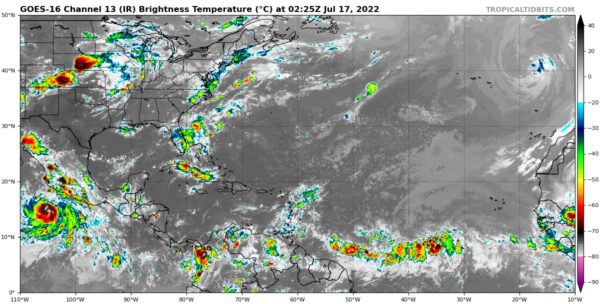 TROPICS: We continue in a holding pattern in the Atlantic Hurricane Season. No disturbances of note in the Atlantic, the Caribbean, or the Gulf of Mexico. The next week looks very quiet, but we do see some signs that the waves coming off the African coast will have more energy and we approach the end of the month. We also know that an upper pulse in the Madden-Julian Oscillation with start aiding in upward motion across the basin, and when combined with warmer than average sea surface temperatures, the season will start heating up. The GFS shows a pretty vigorous disturbance in the Eastern Atlantic out at about hour 354, of the last day of the month. Stay tuned.

BEACHCAST: Daily doses of late morning to early afternoon of widely scattered showers and storms will headline the weather along the beautiful beaches of Alabama and Northwest Florida over the next week. Expect 8-10 hour of sunshine each day, with extreme UV indices. The rip current risk should be low. Highs will be near 90F with lows in the upper 70s to near 80F. Gulf water temperatures are in the middle 80s.

NATIONALLY: The heat is concentrated in the southern Plains and Mississippi Valley on this Sunday, with lots of heat advisories in place. Excessive heat warnings cover North Texas and the Red River Valley, including the Dallas Fort Worth Metroplex. Highs in Oklahoma City and Dallas today will be around 105F. The Vernon and Wichita Falls areas will be as hot as 107F and 109F.

DANCING WITH THE STATS: No record highs were set on Saturday across the country. There should be a few records in this same region over the week ahaead.

WEATHERBRAINS: This week, the panel will entertain meteorologist Adam Houston. Check out the show at www.WeatherBrains.com. You can also subscribe on iTunes. You can watch the show live at live.bigbrainsmedia.com or on James’ YouTube Channel You will be able to see the show on the James Spann 24×7 weather channel on cable or directly over the air on the dot 2 feed.
ON THIS DATE IN 1980: Birmingham was in the middle of an eight day streak of 100-degree plus highs. It was 105F in Birmingham on this date, and 108F in Jasper. Follow my weather history tweets on Twitter. I am @wxhistorian at Twitter.com.