?Summerlike weather is ahead for North and Central Alabama as some early season heat takes charge of our weather. Let’s dig into the details.

FOR YOUR SUNDAY: Temperatures are starting off in the lower and middle 60s this Sunday morning across the area. Skies are partly cloudy and should remain that way throughout the day. Afternoon readings will be in the upper 80s to near 90F. Lows tonight will be in the middle 60s for the most part.

THE WEEK AHEAD: The eastern half of the country is under the influence of a large upper trough. That upper trough will ship out over the next couple of days, and a flat ridge will take shape over the southern tier of states. But a trough will reappear over the next couple of days over the northeastern United States. This will allow for a frontal system to push into the area and increase rain chances. We could see an isolated shower or storm Monday or Tuesday, but the better chances will be Wednesday through the weekend. Highs all week will be in the 90s. With increasing humidity, heat index values will exceed 100 degrees at times during the week ahead into the weekend. 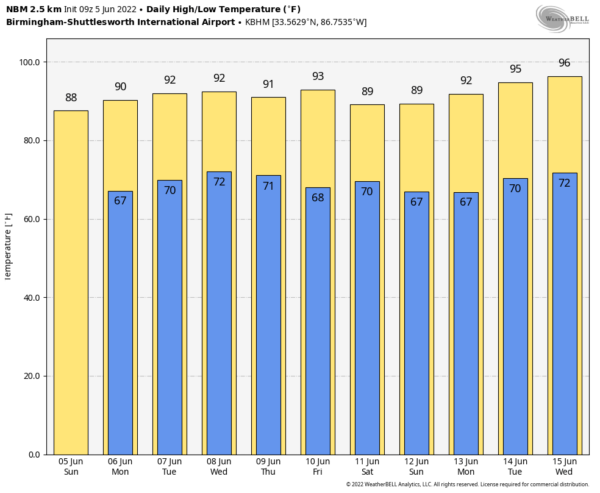 VOODOO COUNTRY: Shooting out to the weekend of the 18th and 19th, It looks like our weather will be partly cloudy with scattered mainly afternoon and evening showers and storms.

TROPICAL STORM ALEX…FINALLY: Alex finally developed a center early this morning about 250 miles east of the coast of Southeast Florida. Top winds are 50 mph and some strengthening is possible before it begins to lose tropical characteristics. It will pass near or just north of Bermuda on Monday, where tropical storm conditions are expected to occur.

BEACHCAST: Currently, the is an old front lying near the Gulf Coast This frontal boundary will continue over the southern parts of Alabama before it comes back north and east next week.

WEATHERBRAINS: This week, the panel will entertain retired Admiral David Titley. It should be a fascinating conversation. . Check out the show at www.WeatherBrains.com. You can also subscribe on iTunes. You can watch the show live at live.bigbrainsmedia.com or on James’ YouTube Channel You will be able to see the show on the James Spann 24×7 weather channel on cable or directly over the air on the dot 2 feed.

ON THIS DATE IN 1966: Hurricane Alma made landfall over the eastern Florida panhandle becoming the earliest hurricane to make landfall on the US Mainland. Follow my weather history tweets on Twitter. I am @wxhistorian at Twitter.com.